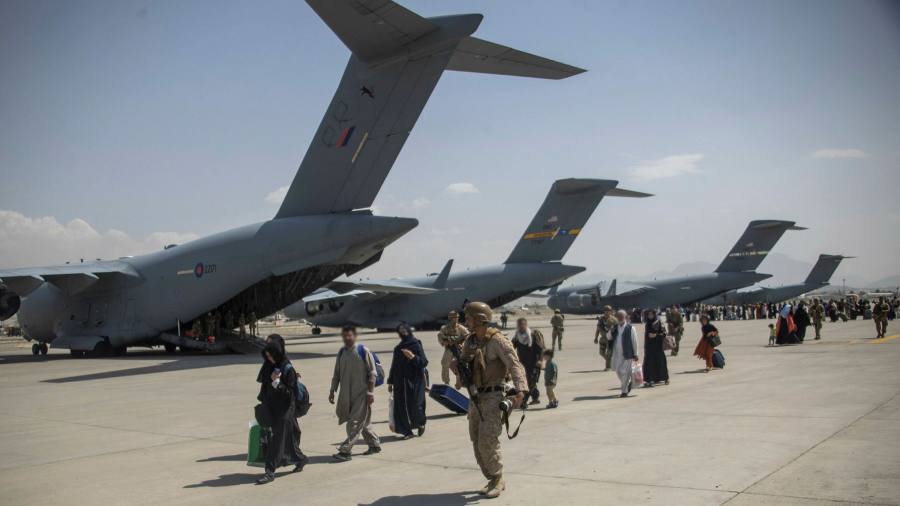 Amid harrowing scenes at Kabul airport, the US and its allies are racing to evacuate their nationals and the thousands of Afghans who assisted their forces. President Joe Biden has hinted he may extend his August 31 deadline for removing US troops; the Taliban says crossing this “red line” would “provoke a reaction”. Armed Taliban resistance could bring an already desperately difficult task to a bloody end. G7 countries meeting on Tuesday must accelerate evacuation efforts — but use all the leverage they still possess with the Islamist militants to ensure troops remain until all those identified as priorities for evacuation have left.

Britain’s prime minister Boris Johnson, hosting the G7 talks, is right to press Biden to be ready to extend the effort beyond next week. Deadlines can usefully galvanise action. But to allow western citizens or Afghans who risked their lives helping the coalition to be left behind, for the sake of meeting what was an arbitrarily chosen date, would be indefensible.

That the Taliban can now claim any veto over the evacuation is testament to the bewildering collapse of US influence in Afghanistan in barely a week. The US withdrawal from large parts of the country has squandered much of the leverage the west once exerted over Taliban leaders — but by no means all of it. Western governments should leave no doubt that the evacuation will be a first, key, test of relations with a new Taliban administration, with support and recognition conditional on the group’s behaviour.

One pressure point is financing. Afghanistan’s former central bank governor has warned the country faces “dire” financial prospects, with a potential dollar shortage and high inflation looming. Ajmal Ahmady said Kabul previously depended on bulk shipments of dollar reserves from the US that are now running low. According to US officials, the Biden administration has blocked Taliban access to Afghan central bank reserves held in US banks. The IMF has put on hold $460m earmarked for Afghanistan in its programme to assist pandemic recovery.

The opium smuggling and levies on fuel and cigarettes trade that have bankrolled the Taliban will not keep the state afloat in a country of 39m people. Western governments should make clear access to reserves and other financial support depends on allowing the evacuation to proceed — and, longer-term, on respect for women’s rights and freedom of expression.

The Taliban leadership is jittery about being cut off from foreign aid and the international payments system. It will know it faces huge anger if public salaries go unpaid, prices soar and the banking system collapses. Afghans have higher expectations than 20 years ago. With a median age of 18, moreover, many have no memory of previous Taliban rule, or the fear on which it relied.

Some Taliban leaders have acknowledged that they do not wish to be once again a pariah state. If they have any hope of eventual recognition beyond Moscow and Beijing, they will know how ill-advised it would be to attract Washington’s ire.

The Taliban, which wants America gone above all, will resist any extension of the August 31 deadline as a potential deception. For the west simply to fold, however, would be to ignore the few cards it still has in its hand. The US has badly mishandled its withdrawal from Afghanistan. Working with its allies, it still has a chance to begin repairing its reputation by ensuring the international evacuation effort succeeds. It cannot afford to mishandle that — or the muscular diplomacy needed to allow it to happen.