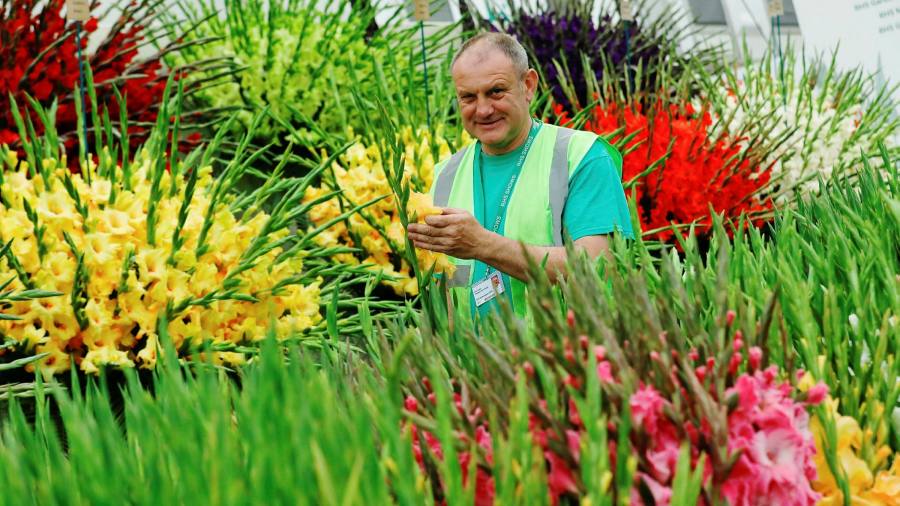 At last, there will be Chelsea Flower. On Monday it begins with the keenly prized gala evening for those with the money, the contacts and the tickets. From Tuesday until Sunday, the show is then in full swing for the rest of us in the Royal Hospital grounds and on TV screens, accessible to anyone who switches on. For the first time it is happening in autumn, not in May.

The exhibitors and nurseries have certainly missed it, as Chelsea is such an important source of customers. What about me? In the first lockdown in 2020 I was briefly wistful, but the weather in that strangely beautiful May was so glorious that I gave silent thanks that I did not have to leave the garden and overdose on exhibits in the middle of London. I pressed on with gardening, as the RHS’s mission would wish, and was glad of the extra five days at the busiest time of the year.

This May it was different. Like Italy, Paris and Jennifer Lawrence on a cinema screen, the Chelsea show was one of the things I really missed. I found myself going back in my mind over great years: the early 1990s, when specialised nurseries were on top form with anything from sweet peas and lupins to amazing farinaceous auriculas; the FT’s three gold medals for its gardens on Main Avenue between 1971 and 1973; the stunning exhibits of the Alpine Garden Society; the displays of orchids from McBean’s that have won innumerable gold medals; and the ability of Hillier to win 73 gold medals in 73 successive years.

I love seeing first-class displays of plants I cannot grow at home, from tree ferns to camellias. I revel in the superb tulips from Bloms Bulbs, knowing that the bulbs would last only a year in my garden. I might as well enjoy them, safe from slugs and storms, as cut flowers at Chelsea instead.

There is always something unexpected, even that corgi in an outdoor garden with which I was photographed a few years ago. An FT reader promptly recognised its pedigree and sent a letter about it, duly published. You would be most unlikely to see a corgi at the Philadelphia Flower Show or the Ghent Floralies. 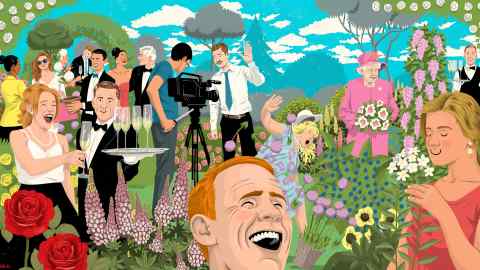 The autumn timing is exciting. I always loved the RHS’s Great Autumn Show in its two big London halls. It was the show from which my own gardening gained most. It kept dahlias in the foreground while fussy taste was turning against them. I learnt about September-flowering border plants I would have missed, including the tall white leucanthemella, best in damp soil. I love Michaelmas daisies but the Great Autumn Show taught me there is even more to late September than “a” for aster, before the botanists allotted asters to many different Latin names.

In the main pavilions, the living heart of the show, the nursery exhibitors have a chance to show flowers we never see at Chelsea in May. Green J Jam from Worcestershire is showing more than 50 different varieties of those late summer staples, penstemons. Ornamental grasses will be out in
force from Ashcroft’s Perennials of Merseyside, enjoying the late timing that shows them at their best. Middleton Nurseries of Tamworth, Staffordshire, will be showing a big range of the salvias which are such transformative choices for late summer and autumn. The Sun newspaper is staging a show of the latest bedding plants, including an excellent verbena named after its veteran gardening columnist Peter Seabrook’s recently deceased wife.

I always admire the gold-winning gladioli from Pheasant Acre Plants, but this year it is able to combine them with its other speciality, dahlias, grown on its Welsh clay soil and lifted every winter. D’Arcy and Everest will be reminding us of a useful lesson, that alpines and small hardy plants do not dwindle in late summer.

It is great that such a range of nurseries are attending from all over Britain. By controlling light and temperature, Binny Plants from West Lothian will even be showing peonies in flower, natural candidates for a May show. The International Camellia Society sounds particularly unmissable, as it is showing autumn flowering camellias for the first time. Of course, big hitters like Notcutts will be essential viewing, as will Raymond Evison Clematis, keeping us up to date with new varieties for autumn. I anticipate hours of pleasure. 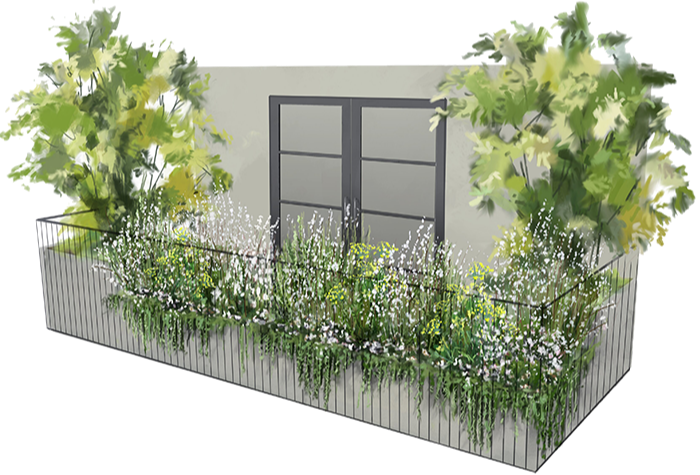 Alexandra Noble’s Balcony of Blooms, one of this year’s entries

Outdoors, designers and the RHS have had plenty of time to adapt to
the moods of the moment. It will be especially good to study the new emphasis on container gardens, window boxes and balconies, the spaces of so many new recruits to gardening. The containers are helpfully varied, from wooden boxes to corrugated metal and an entire display called Pop Street Garden, full of madly vibrant paint and plants. Mika Misawa is the polar opposite, the designer of a Japanese style of garden for tranquillity in a city, using only one type of flowering plant. It should fascinate those busy control freaks who want total command over a small garden without using disease-prone clipped box.

Like Italy, Paris and Jennifer Lawrence on a cinema screen, the Chelsea show was one of the things I really missed

The Parsley Box Garden sounds unmissably odd, a tribute to “the celebrated Nordic restaurant Noma, that has held the title of Best Restaurant in the World for four years”, as some of you perhaps know. Its underlying themes are fermentation and preservation and the main colours are orange and rust. The materials aim to “hint at the fluidity of changes in identity through life” and “to subtly bring conversation around ageing to the fore”. I have done the same job for more than 50 years and am not planning to transition in my seventies.

Alexandra Noble’s Balcony of Blooms sounds more promising, I also wait to see how Martha Krempel has combined a “swaying day bed” and a view of the “subtropical leaves of the yucca above” as those leaves are usually very spiky. On and off Main Avenue these smaller landscapes have proliferated and should be full of interest. 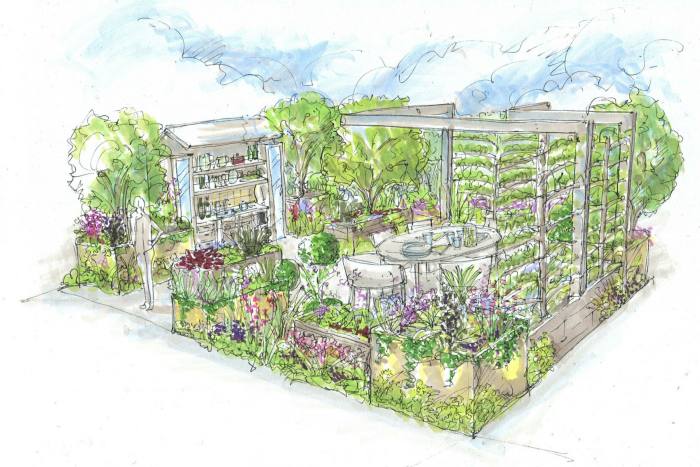 On a bigger scale, carbon capture and eco-planting are major themes, especially of the garden for the show’s sponsors, M&G, which plays with a “pocket park-like” urban space that, heaven help it, “supports wildlife”. A modern garden by two Thai designers sounds particularly interesting, balancing the “frenetic energy of Bangkok”, presumably those traffic jams, with the calm simplicity of its planting. Another, by Jonathan Snow, evokes the superb flora of Nepal and the Himalayas, no easy task.

The Bible Society is also making a debut, sponsoring a garden by Sarah Eberle that is inspired by her local Dartmoor. It is based round Psalm 23, without sheep but with plenty of green, and advertises the efforts of churches and schools “to create shared, beautiful spaces”. Last year they were firmly locked.

We are indeed emerging from the “valley of the shadow of death”. One garden celebrates 80 years of the Guide Dogs for the Blind Association, without corgis. Another honours Florence Nightingale and the rather different subject, modern-day nursing. She apparently liked foxgloves, so their seed heads will be included. Gardens have been our lifelines for the past 18 months. They give Chelsea in autumn a spin worth celebrating.