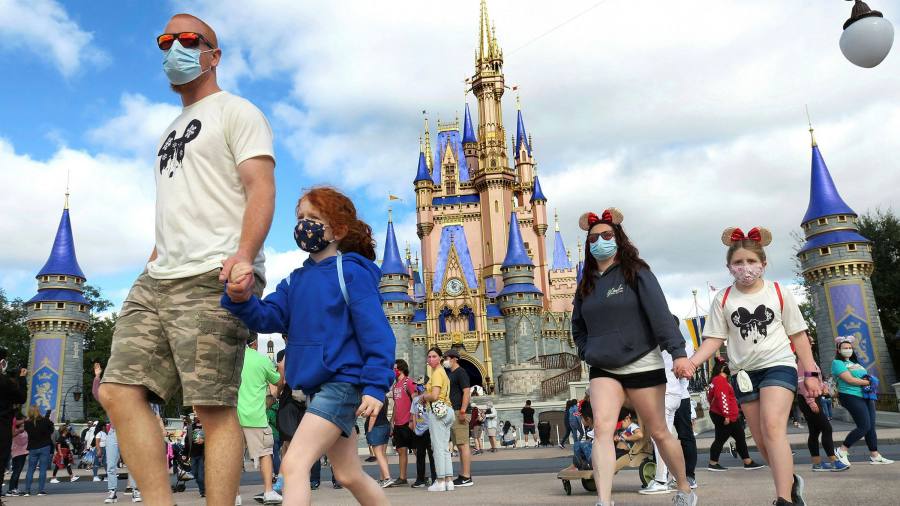 Sign up to myFT Daily Digest to be the first to know about US & Canadian companies news.

Back in the early months of the pandemic, FT Alphaville proposed a new economic gauge to truly measure when life had returned to normal. We crowned it “The Disney Parks Indicator” (DPI).

The idea was simple: a visit to one of Disney’s resorts requires several recoveries, from the psychological to the economic, to take place. For instance, consumers must not only have enough disposable income to plop down $1,500 per head on a holiday, but also be comfortable standing shoulder-to-shoulder in long indoor queues for rides such as Space Mountain. Oh, and they must be OK with potentially getting puked on.

Our thinking was that once Disney’s Parks, Experiences and Products segment — which includes the Florida resort as well as others in Asia, Europe and the US west coast — returned to its 2019 revenue run-rate, it would be fair to say the pandemic was truly over.

Looking at the financials, it seems that is far from the case.

Its third-quarter results published in early August showed that while the House of Mouse’s parks grew over 300 per cent year-on-year thanks to many of parks being closed in 2020 due to the pandemic, there’s still a long way to go yet to a full recovery.

Indeed, take a step back and compare the 2021 figures to 2019’s third quarter numbers, and things are far uglier. In the third quarter of the financial year ending in 2019, Disney’s Parks segment made $6.6bn in revenues. Which means the division is still recording sales over a third below its pre-pandemic levels, and on an operating profit basis, a whopping four-fifths below those arguably overcrowded days. And that’s with the US economy almost fully reopen. Yikes.

So when should we expect a return to normality? Well like the Wall Street forecasts of many businesses exposed to global travel over the past six months, expectations for Disney’s parks business have slowly shifted from late 2021, to 2022, and now to 2023 as it has become clear that Covid is not going away anytime soon.

A note from Deutsche Bank published Friday is a case in point. Its analysts reduced Disney’s “forecasted recovery pace in 2022, which could change again depending on the forward trajectory of infections and vaccinations”. The reason? Well, their proprietary attendance tracker for Disney’s parks has shown a downturn in recent weeks, thanks to cancellations “primarily from business conferences and other large groups”.

In fact, judging by this graph it seems that the back-end of 2021’s attendance figures at Disney World Florida, the company’s largest resort, are looking like they might be very similar to 2020s: 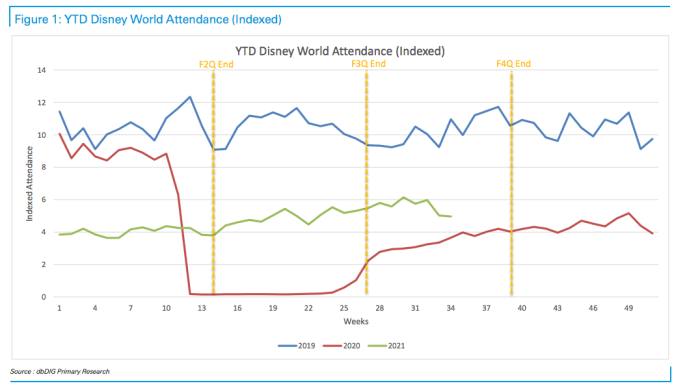 By 2023, analysts expect a whopping $9bn in earnings from the segment, more than ten times this year’s estimate. That still feels too optimistic for an economic era which has had more plunges, twists and turns than Expedition Everest.