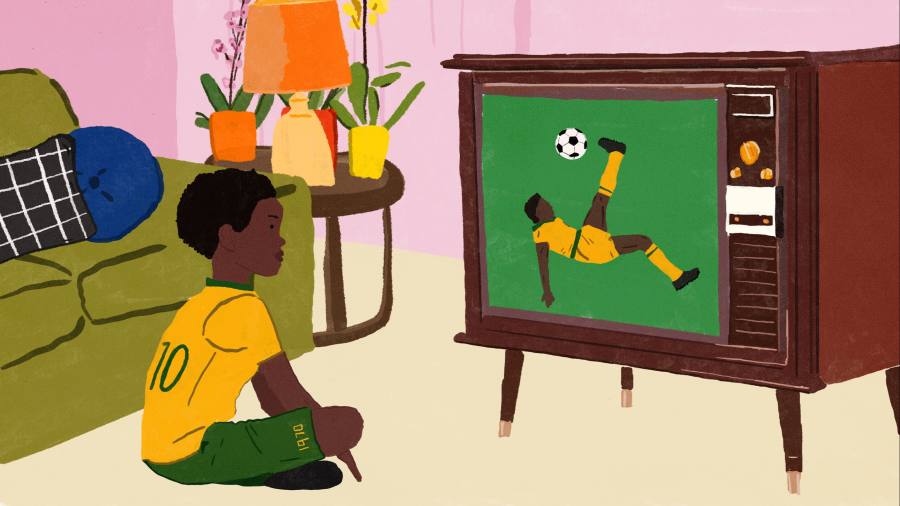 Sign up to myFT Daily Digest to be the first to know about Football news.

When I was 10, I wanted to be the best footballer in the world. My plan was simple: move to Brazil when I was 16, play football for a Brazilian club, become a Brazilian citizen and then play for the national team. Pelé, the Brazilian commonly regarded as the greatest player of all time, was my lodestar.

But things didn’t go to plan: I wasn’t good enough. When I was 11, I failed to get into my school team and cried for three days. Football was my love; the fact my dream didn’t come true was more bitter than my first romantic rejection.

For a time after, this experience felt horrifyingly embarrassing. I had felt entitled to emulate the greatest footballer without seriously considering whether I was any good. I thought my love of football was enough.

But when I eventually confided this story to friends, they found it amusing and even endearing. I learned to be a little kinder to my childhood self, enfolding his optimism into my adult love of football. It provides a counterpoint to more serious observance of the game. Whenever I see a young footballer breaking into a team, I think “that could have been me” but also “of course it couldn’t”.

I thought that watching England play in the recent Euro 2020 championship would be embarrassing. And at first it was. Not the games per se, but the experience. The refrain of “It’s coming home”, repeated ad nauseam, was intensely cringeworthy. Here we go again, I thought, another England competition soured by the bullish entitlement of the fans.

But then my feelings changed. I realised support for England was often animated not by arrogance, but something more open.

The clearest example of this, I think, is the song “Three Lions” with lyrics written by David Baddiel and Frank Skinner, first used as an anthem for Euro 1996. It begins with four verses of “It’s coming home”, referring to the fact that England was hosting its first major international tournament since 1966 but also to the hope the team might win the trophy. I have heard everyone from school children to pensioners singing it. From the outside, the song might seem like a provincial celebration of England’s past glories. One writer even linked it to Britain’s nostalgia for empire. But it’s nothing of the sort. It’s a reflection of domestic memories, good and bad.

In his book The Four Loves, CS Lewis distinguishes between four different types of love: eros, friendship, charity and affection. Affection, Lewis writes, is “the least discriminating of loves”. This is because “almost anyone can become an object of Affection; the ugly, the stupid, even the exasperating”. And perhaps even the embarrassing. The only thing that matters is that “its objects have to be familiar”.

“Three Lions” resonates with familiar images and emotions that dilute its initial bombast: “That England’s gonna throw it away / Gonna blow it away / But I know they can play / ’Cause I remember / Three Lions on a shirt / Jules Rimet still gleaming”. In the video, scenes of heartache are followed by images of Bobby Moore carrying the 1966 World Cup — a golden incarnation of England’s fragile success.

“Thirty years of hurt / Never stopped me dreaming” could be cringeworthy. The English are suspicious and embarrassed by earnestness and sentimentality. Thirty years of not winning a football competition? And all this brouhaha? Ugh. But when filtered through self-deprecation, the curl of disgust induced by an avowal of “It’s coming home” turns to affection. We know it might not come home and in the end it didn’t. The phrase is not an affirmation of arrogant self-confidence but a recognition of our collective past, its triumphs and miseries.

The most powerful forms of love often have a quirky dimension to them: private jokes and informal rituals; the memory that you wanted to play for Brazil when you were 10; the chant of “It’s coming home”.

The surge of memories and emotions evoked by watching England win and win but ultimately lose this summer, surrounded by friends and strangers, felt right to me. As CS Lewis writes, “I think it is possible to be strengthened by the image of the past without being either deceived or puffed up”. He adds: “A man who really loves his country will love her in her ruin and degeneration — ‘England, with all thy faults, I love thee still.’”

Tomiwa Owolade is a writer and critic