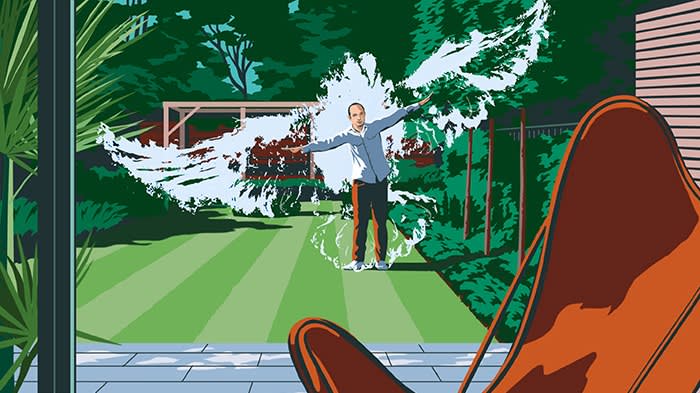 Sign up to myFT Daily Digest to be the first to know about House & Home news.

A celestial vision manifested itself to me last week. No saint appeared on a cloud or spelt out revelations in aubergine seeds. Instead, a pigeon left a body print on our patio doors.

The wings are raised and spread like those of a Renaissance angel, the long primary wing feathers delicately outlined in feather dust. The side of the head, with a clear spot for the eye, is rendered in grayscale. You can even see the ghost of a tail.

This evidence of an avian fail highlighted how rare such flying accidents are, even in complex human-made environments. I realised that my stacks of bird books have almost nothing to say about how birds manage to fly so well. This, with due apologies to ostriches and penguins, is their defining characteristic. It inspires humans with the belief that we too can do things that seem dauntingly difficult.

It looks as if the pigeon was braking in the split second when the reflected sky it was flying towards turned into a pane of glass. One moment it was flapping along metaphorically humming the William Tell overture. The next, a cockpit alarm was bleeping and a recorded voice was yelling “Pull up!”

The crash victim must have bounced off the glass and flown away. Fortunately, pigeons in my vicinity are well padded. They waddle around our lawn wearing expressions of dim-witted complacency. They remind me of a particular breed of town councillor I used to encounter as a beat reporter.

Hein Van Grouw disputes this characterisation — on behalf of pigeons, not elected officials. He is a pigeon fancier and senior curator of birds at London’s Natural History Museum. Pigeons are actually pretty smart, he says. They can count up to nine, which I suspect some members of the current UK cabinet find a challenge.

An evolutionary arms race with predatory falcons means pigeons are excellent flyers. But their adaptations can make them appear dumb to humans. Pigeons’ heads are small relative to their huge chest muscles and bob awkwardly while walking, a consequence of the need to hold them still in flight.

Without this ability, birds could not see where they were going so well. Superb eyesight, it transpires, is as important to flying ability as wings and feathers. “Most of a bird’s brain is devoted to vision,” says Richard Bomphrey of the Royal Veterinary College.

Pigeons are actually pretty smart. They can count up to nine, which I suspect some members of the current UK cabinet find a challenge

Judging distances is crucial. Consider in human terms the feat a starling accomplishes in landing on a garden bird feeder. Can you drive a car into a parking bay at 20mph then stop dead, perfectly aligned with the white lines? Me neither.

The ability of some birds to fly in high winds is equally incredible. It has been stormy lately hereabouts. Small birds took shelter. But crows and seagulls were kiting around in the 40mph gusts.

It must feel like drift diving, where you don scuba gear, jump into a rip current and go with the flow. This was a blast when I tried it. But I surfaced a mile from where the dive boat expected to pick me up and I’m not sure I’d do it again.

Displays of expert flying may be a way to show fitness to rivals and potential mates, says Emily Shepard of Swansea University. Equally, those storm-riding crows and seagulls may just have been having fun, she suggests, sotto voce.

I recently went on a gliding course, evidence of a midlife crisis according to FT colleague Jane Owen. It also disproved Warner Brothers’ contention “you’ll believe a man can fly”, at least as it might have applied to me. “OK, I’ll just move us back into that rising air, shall I?” was the refrain of the instructor every time I’d taken the controls.

After a few drinks one night, another trainee pilot confessed that the only book he’d ever read was Jonathan Livingston Seagull. The 1970s fable concerns a bullied seabird that aspires to fly brilliantly. This has not aged well. But the book encouraged my acquaintance, who is severely dyslexic, to get through school and into professional employment in an era when few allowances were made for such handicaps.

A bird in flight recurs as a metaphor for the freedom of the spirit from the writings of The Venerable Bede to the movie Blade Runner. It is impossible to release one into the air without feeling moved.

Speakers on the House & Home stage will include FT columnists Luke Edward Hall and Robin Lane Fox, among others. More details at ftweekendfestival.com. To book tickets, visit here

But the reality is that flying imposes huge physiological penalties. The weight limit on birds that are competent flyers is marked by the 33lb Andean condor. A forelimb injury a mammal could recover from is a death sentence for a bird. “They are masters of the sky, but they are also slaves to it,” Shepard says.

As for the pigeons cannoning into my windows, a solution is under my nose. The FT moved its London operation into smart, refurbished offices in 2019. For a week or so sonorous thuds rang out as reporters ricocheted off the internal plate glass doors as they rushed to the news desk with hot scoops. Janitors applied discreet stickers, highlighting the peril.

If that works for business journalists, it should work for pigeons too.

Jonathan Guthrie is the head of Lex