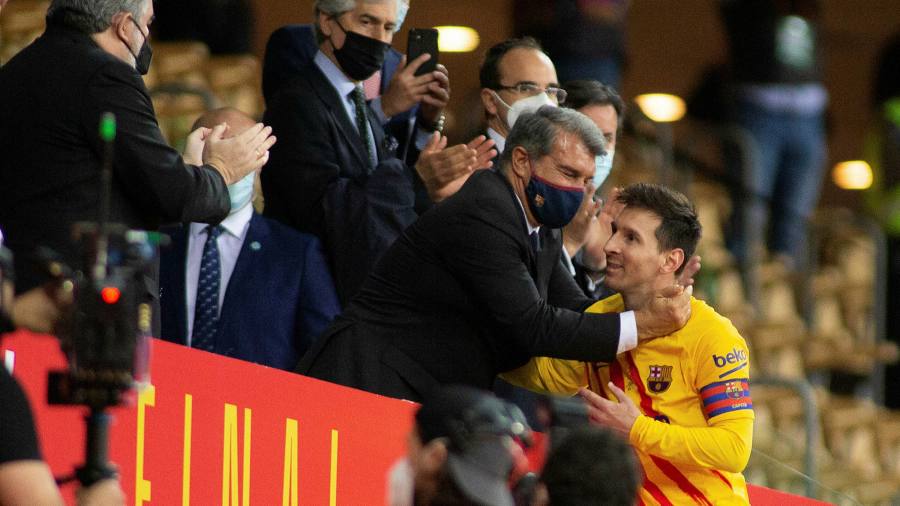 Sign up to myFT Daily Digest to be the first to know about FC Barcelona news.

The writer is a partner at Sequoia Capital

Some people who go to work at the Nou Camp, home of five-times Champions League winners FC Barcelona, must have forgotten the adage that graveyards are full of indispensable people. That became clear last week as the sorry saga of Lionel Messi’s departure from the club and free transfer to Paris Saint-Germain played out in full public view. Instead, the management of Barcelona provided the fodder for a Harvard Business School case about how not manage an investment portfolio or an organisation.

The vitals: Messi, one of the greatest footballers the world has ever seen; loyal club servant since the age of 13; highest goal scorer in the history of La Liga; six-time Ballon d’Or winner. As much a part of Barcelona as Antonio Gaudi’s Basilica or its Gothic Quarter.

What’s an investment manager to do with an asset (for yes, footballers, like it or not, are assets) whose rate of growth is slowing, and whose value is sure to decline?

Investment managers worth their salt have an answer. They are not anchored to the past, or to the refuge which, in the argot of the trade, “names” provide, or to the idea of squeezing out another quarter or year of performance from a stock whose glory years are over. Instead they redeploy the money and purchase different stocks lodged on the right side of progress.

Barcelona’s management chose to do the opposite. They continued to devote much of their payroll to Messi (so triggering a series of pay demands — to which they acceded — from his teammates). It is hard to exaggerate the damage that this, and a series of terrible player purchases, has done to the club, which is now drowned in debt.

Some people may blame Messi, or the intransigence of his father, who acts as his agent. But it is hard to fault either. Both were responding to market conditions when they made their requests. Rather, the culprits are those who gave in to the demands. Remember, no investor is ever required to buy an asset.

Barcelona committed investment hara-kiri. Instead of selling Messi during the past few years, they continued to pay him more until they were left with no choice but to shovel the 34-year-old off their books. By contrast, Manchester United sold the then 28-year-old David Beckham to Real Madrid in 2003 for $34m — probably more than $100m in today’s market. If leaks of Messi’s contract are to be believed, Barcelona paid Messi €555m between 2017 and 2021.

The other aspect of the Messi debacle that seems so foreign to anyone from Silicon Valley is that he — and all other footballers — are paid in cash (albeit with bonuses tied to certain accomplishments). No vibrant organisation in my little world compensates valued performers in such a ham-fisted manner. Instead, they grant equity whose ultimate value is tied to the overall health of the business.

Pedants will argue this isn’t possible in the world of football. They will say that players come and go, or may just have their moments in the sun. Yet the same happens in Silicon Valley, where highly valued employees might work at one company for three or four years before moving to another.

I suspect the real answers are different. This approach flies in the face of accepted practice: it requires football club owners to act less like 19th-century textile mill owners; it means that agents would need to abandon self-dealing; and, above all, it would mean that players come to grips with the uncertainty associated with the value of long-term equity compensation.

Imagine if every football club set aside about 25 per cent of its equity for player compensation, requiring that players sell their shares upon leaving the club. If Barcelona had compensated Messi with a combination of 50 per cent cash and 50 per cent equity both he and the club would be far better off today. Two years before Messi joined the club it had revenues of $123m which, during the pre-pandemic season, had risen to more than $1bn.

When Messi made his debut for Barcelona in 2004, the club was probably worth about $400m (precise figures are unavailable). Today it is worth about $4.8bn. If, as his value became clear, Messi had been granted shares or options, for about 10 per cent of the club, that would be worth about $500m today.

I know this sort of approach will be laughed out of town in the boardrooms of the world’s most valuable clubs. But I know too that, had it been adopted by the management of Barcelona, today they would not need to beg for money to pay for the maintenance of the graveyard they created.