Sign up to myFT Daily Digest to be the first to know about Sustainability news.

This week’s dire warning on climate change from international scientists has refocused attention on the COP26 conference due in Glasgow in November. But its less high-profile sister, COP15, is scarcely less significant. This, too, is a big global environmental meeting, scheduled for October in the Chinese city of Kunming. The fact that many countries are taking it even less seriously than COP26 is a problem.

COP15 is shorthand for the 15th meeting of the “conference of the parties” to the Convention on Biological Diversity — a treaty adopted at the 1992 Earth Summit in Rio de Janeiro. It has much in common with COP26, the 26th gathering of the parties to another Rio treaty, the UN Framework Convention on Climate Change.

COP26 is supposed to protect the global climate. The other summit has the equally vital task of conserving natural life so it can be used sustainably and fairly. Both were originally set for last year, but the pandemic delayed COP26 once and COP15 twice. A third delay is expected for Kunming, where delegates are due to negotiate an agreement that, as currently drafted, aims to protect and conserve at least 30 per cent of the world’s land and seas by 2030.

It would also cut pesticide use by at least two-thirds, halve food waste and eliminate the discharge of plastic waste — in theory. In practice, the world has an abject history of failing to protect nature. Razed forests, overfished seas, polluted rivers and more have left an estimated 1m animal and plant species threatened with extinction, many within decades, a landmark expert assessment found in 2019. This decline is unprecedented in human history, and accelerating.

There are many reasons climate change has had more attention. While carbon emissions are rightly treated as a global problem, countries regard the forests, fauna and other natural life inside their borders as theirs to use as they wish. Emissions are also easier to count than life at the bottom of the ocean or in a remote jungle, so it is easier to compare countries’ efforts to manage them — and shame laggards — though this was not always the case.

Yet this year’s scheduled COP meetings make up two sides of the same important coin. Forests, peatlands and other types of wetlands store huge amounts of planet-warming carbon dioxide that is released once such areas are burnt or drained for agriculture, as they often are. Protecting them therefore helps the climate as well as the natural life that depends on them.

Likewise, it makes no sense to grow random trees willy-nilly to help slow climate change — though this is the end result of some of the carbon offsets companies are rushing to buy. Far better to restore forests in a way that nurtures the specific animals and plants that need them.

As with the climate change negotiations, the biodiversity talks have long been dogged by money squabbles. Poorer countries understandably want richer nations to help pay for their conservation efforts. Reversing the decline in biodiversity requires an average of $711bn a year until 2030, according to a think-tank set up by former US Treasury secretary Hank Paulson.

If that sounds pricey, bear in mind studies that show $44tn of global gross domestic product, or roughly half, depends a little or a lot on nature. If the world’s bees, butterflies and other pollinators alone were wiped out, it would lead to an estimated drop in annual agricultural output of some $217bn.

The cost of a poor COP15 outcome might not seem high now. But in the not too distant future it may, like the cost of unchecked climate change, become impossible to calculate at all. 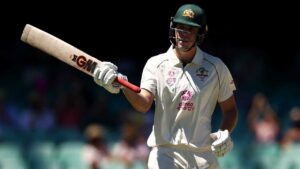 Green Leads The Way As Australia Run Through England Again