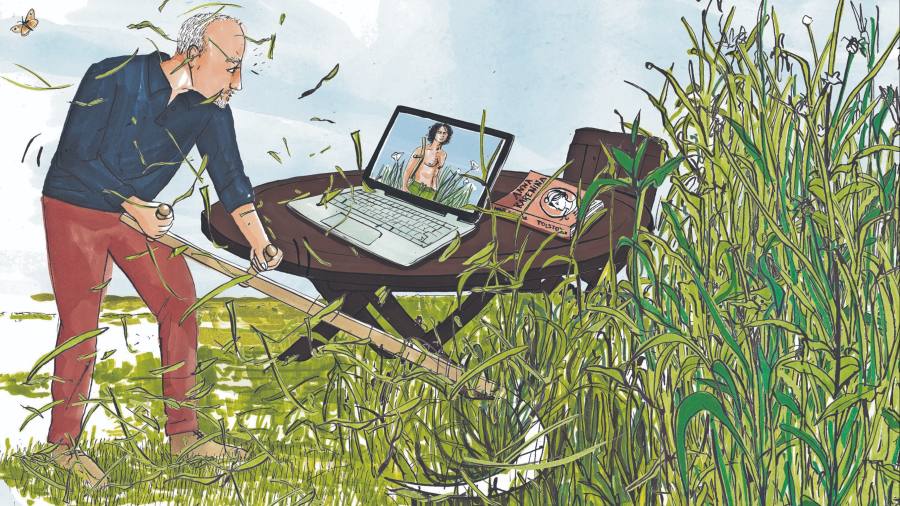 Sign up to myFT Daily Digest to be the first to know about Gardens news.

If you have a wild flower meadow or an overgrown lawn you may yearn to acquire a scythe. You should then reflect that nature does the real hard work of producing flowers and long grass. When it comes to mowing them down in the traditional way, you will provide all the muscle.

My advice on getting out of bed the morning after your first serious scything session is this: don’t. Lie as still as possible. It will hurt less.

My shoulders and back have now recovered enough for me to crawl to a computer and explain why I took up the scythe after a lifetime of prudently avoiding manual labour.

I have always allowed clover plants to flower in our lawn to feed bees and other pollinating insects. Participating in No Mow May, a campaign run by the Plantlife charity, was a natural extension of this laissez-faire policy. Come June, I left a chunk of sward to grow long and unruly. I mowed the rest of the lawn as usual to counterpoint the flower borders.

I then did everything you should not do if you want a decent meadow patch. I sowed wild flower seed directly, including grass-suppressing yellow rattle. I should have scattered it on to bare soil in autumn. None of the seeds grew. So I raised flowers such as corncockle, ox-eye daisies and field scabious in the greenhouse and planted them as plugs.

After an hour, I had given the meadow patch a haircut that would have entitled a human customer to ask for their money back

The meadow patch was an entirely undeserved success because a gatekeeper, a pretty orange and chocolate-brown butterfly, happened by and unloaded her eggs. About 10 of her offspring made it to adulthood, roosting among the stems and feeding on the flowers. The patch also harboured a couple of meadow brown butterflies and some day-flying moths.

The butterflies and moths would rise in a cloud and flutter around me when I took screen breaks during working-from-home days in August. All that was missing to complete the picture of natural harmony was a bluebird to perch on my finger and sing a duet à la Snow White in the Disney cartoon.

When the butterflies, moths and flowers were over, I was left puzzling over how to mow the long grass. I could have strimmed it. But that would have been too easy.

My wife and daughter, demonstrating a hitherto unsuspected interest in traditional agriculture, had enjoyed watching Aidan Turner scything. This handsome actor worked stripped to the waist, muscles gleaming with manly sweat, in his role as Poldark in the eponymous TV drama.

For my part, I viewed instructional videos in which rangy old Americans effortlessly cleared great swaths of grass while declaiming Robert Frost’s poem “Mowing”. I also reread the bit in Anna Karenina where Levin reconnects with the soil of Mother Russia while scything.

It seemed to me that a scythe was the way to go. But traditional English scythes with heavy S-shaped handles are hard for suburbanites to come by, without visiting a country pub at the weekend and stealing one off the wall.

I ordered a cheap foreign scythe online instead.

“What do you think?” I asked my wife when I had unwrapped it.

“I could take my shirt off?” I suggested.

“I’m sure that won’t be necessary,” she said. “Just don’t go out in the garden with your hood up. Elderly neighbours will think you’re the Grim Reaper, come to collect.”

After an hour of experimental scything, I had given the meadow patch a haircut that would have entitled a human customer to ask for their money back. I was very out of breath. I still had the same number of limbs. This seemed like a bonus.

Just don’t go out in the garden with your hood up. Elderly neighbours will think you’re the Grim Reaper, come to collect

Later, I caught up with Beth Tilston, an instructor and member of the Scythe Association. She told me what I had been getting wrong, which was everything. She described my cheap scythe dismissively as “a slasher”. She recommended an Austrian implement of the kind Alpine farmers traditionally use to harvest grass for livestock. These are easily adjusted to owners’ differing body shapes.

Scything itself should be a “rhythmic and gentle motion, as if you are unzipping the grass from the ground”. That is where the blade should rest. If you are lifting it up you are doing too much work, explains Steven Tomlin, an instructor who abandoned a career in engineering to learn traditional crafts.

There is growing interest in these skills. I understand the appeal of technique over technology. Mowing long grass is a good example. Strimmers are noisy, clumsy things that strew debris and need fiddly maintenance. Scythes are quiet, satisfying and good exercise, if you learn to use them properly.

At the same time, I am a little suspicious of the romanticisation of manual labour by folk who do not depend on it for a living (Tolstoy, come on down). Farm workers must be very glad scythes are no longer used to harvest wheat, I suspect.

Hand tools often work best for small jobs and where precision matters more than speed. I’ll still be using my battered hover mower to cut the formal part of our lawn. But I plan to keep the meadow patch going in hopes of more gatekeepers. I will keep an acquisitive eye out for an Austrian mowing tool. One scythe fits all, I hear.

Jonathan Guthrie is the head of Lex