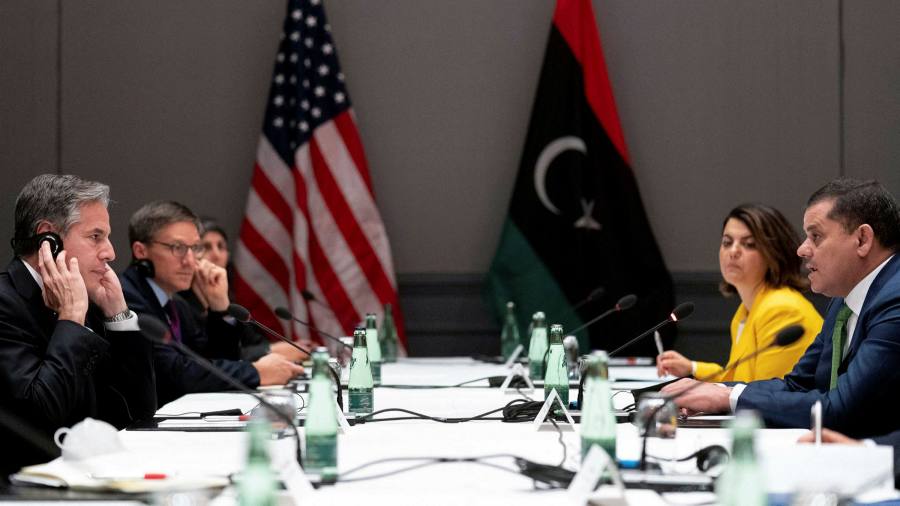 Sign up to myFT Daily Digest to be the first to know about Libya news.

At an international conference in Berlin less than two months ago, US secretary of state Antony Blinken delivered an urgent message about the future of Libya, which has been roiled by a decade of political unrest.

“A sovereign, stable, unified, secure Libya free from foreign interference is critical to regional security,” he declared. “For that to happen, national elections need to go forward in December.”

Blinken’s statement provided fresh hope for a nation whose 7m inhabitants have been looking forward to voting in presidential and parliamentary elections on December 24, as part of a UN-backed peace process. It signalled that President Joe Biden and his colleagues would abandon the Trump administration’s hands-off approach to Libya. It also showed that all 17 nations that attended the Berlin conference were ready to do their part in helping Libya realise its potential as a democracy.

But there are rising fears that this promise will once again be broken, as a small group in Libya attempts a last-ditch effort to cancel the election because they know they are unlikely to hold on to their positions if voters have their say.

Libyans are doing their part to prevent these bad actors from running roughshod over the UN-approved electoral timeline. Emad al-Sayeh of Libya’s High National Elections Commission is courageously preparing for the poll, and more than 2.7m voters have been registered. Countless activists are following in the example of Salwa Bughaighis, the heroic Libyan human rights lawyer who challenged the role of militias in the aftermath of the revolution and was tragically assassinated in 2014.

But we Libyans cannot do it alone. The US can help by enforcing stiff and immediate sanctions against anyone who tries to obstruct the country’s electoral process, even if those individuals currently hold positions in the Libyan state.

To be sure, free and fair elections are just the beginning of a process that will take years — and one that will require leaders who can secure and unify a country that has been marred by deep divisions. But I know from my time as the minister of interior in Libya’s Government of National Accord that Libyans are ready to challenge corruption, stamp out terrorism, attract foreign investment and rebuild our country’s healthcare system.

One immediate priority must be to resolve the differences between the western and eastern parts of our country. A first positive step is the reopening of the coastal road between Misurata and Sirte, thanks to the efforts of the UN-backed 5+5 committee.

We must also ensure an equitable distribution of oil revenues, root out corruption at the national central bank and restore trust among international businesses that it is safe to return to the country. Then there is the vital importance of building a modern, inclusive society that recognises the rights of all Libyans. I know first-hand that having a diversity of voices at the table leads to better decisions.

Libyans recognise that lasting progress will not be achieved overnight. But elections are a necessary first step in the challenge of removing foreign fighters from Libyan soil, addressing the public health crisis caused by the global pandemic and providing much-needed economic relief to those in need.

As someone who has devoted my life to building a fully sovereign Libyan state, I draw inspiration and optimism from the support our effort has garnered, both at home and abroad.

The Biden administration must help Libya by sending a clear message that those who stand in the way of free elections will be punished, and that the US stands for peace and democracy in a country that has been devastated by war and corruption.