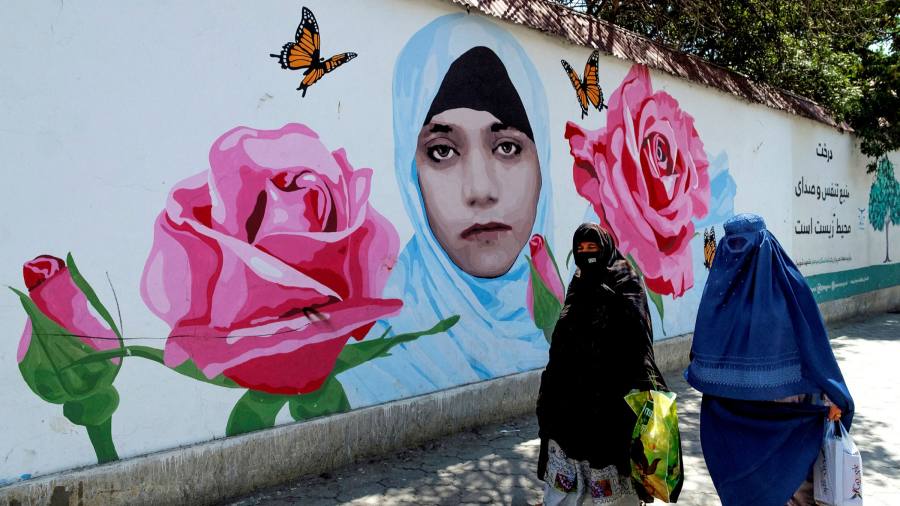 Afghanistan’s new rulers moved swiftly to assert their authority over Kabul’s extensive network of protective blast walls. The concrete walls — built to protect public buildings and residential neighbourhoods from car bombs and other attacks — had emerged in recent years as a canvas on which artists, activists and the Afghan public painted colourful murals with generally uplifting messages of hope, peace and unity.

But within days of arriving in the city, the Taliban began obliterating the public art — covering the cheery images, many of children, with thick paint and replacing them with stark, black victory slogans — an ominous sign for the prospects of arts and culture in Afghanistan.

Among their first targets: a mural commemorating the 2020 Doha Deal, which paved the way for the US military withdrawal from Afghanistan and the Taliban’s return to power two decades after the US-led invasion drove them out in 2001.

The striking image called “I See You” — two eyes looming over the pair of Taliban and US officials who signed the deal — was replaced by a warning that Afghans should not trust “the enemy’s propaganda”.


A wall painted with a mural of Zalmay Khalilzad, US envoy for peace in Afghanistan, and Mullah Abdul Ghani Baradar, the leader of the Taliban delegation, in Kabul © Mohammad Ismail/Reuters

“They were afraid of these murals and they had a very clear plan for them,” says artist Omaid Sharifi, co-founder of the grassroots movement Artlords, which mobilised Afghans to paint more than 2,000 murals across the country. “They knew that these murals were the soul of Kabul city, and they wanted to destroy — silence — the soul of Kabul.”

The first Taliban regime, from 1996 to 2001, was a time of extreme hardships for the country’s artists, as an extreme, dour, joyless interpretation of Islamic law was enforced.

Arts and entertainment — even television and videos in private homes — were banned by fundamentalist leaders who believed photography violated the Islamic injunction against idolatry.

In their zeal, the Taliban blew up two monumental 6th-century Bamiyan Buddhas — an act of cultural vandalism that provoked global outrage. Music was prohibited, instruments smashed, with brutal punishments for anyone who broke the rules.

Many Afghans hoped the Taliban — who have embraced social media with gusto — might have grown more tolerant of arts and cultural expression over the past two decades. But the destruction of Kabul’s murals, Sharifi said, has made clear that the new regime will not tolerate any voices other than their own.

“They said, ‘you love these things, these were your voices, and this is the way we will silence your voice,” the art activist, now in an Abu Dhabi refugee camp, tells me. “It is in their DNA not to let anything that is beautiful, anything that is hopeful.”

Among those celebrated in an Artlords-initiated mural was Ahmad Sarmast, founder of the Afghan National Institute of Music, and the all-female Zohra Orchestra, which performed internationally.

Sarmast, who was in Australia when the Taliban marched on Kabul, has no idea whether his ten-year-old institute — which had around 350 students learning both Afghan traditional and Western classical music — will be permitted to reopen.

The campus — which has its own concert hall — is currently under Taliban “protection”, but Sarmast’s friends have sent him pictures of the Zohra orchestra mural being erased with white paint.

“The speculation was that the Taliban have changed and will behave differently. But that speculation is fading away,” he tells me. “As days are passing, we can see how the Taliban are behaving . . . Their words and their actions are totally different.”

With the future for cultural life in Afghanistan looking bleak, Sharifi says it will fall to the diaspora to carry forward Kabul’s once vibrant arts and cultural scene. Artlords helped 62 artists and their families flee in recent weeks, and hopes to help another 100 to safety, he says.

“The Taliban have not changed — they are still the same as they were and I don’t see any hope they will allow any expression of art,” Sharifi says. “The best representation of Afghanistan art and culture will be outside Afghanistan. We want to be the voice of the millions of Afghans who are silenced inside.”