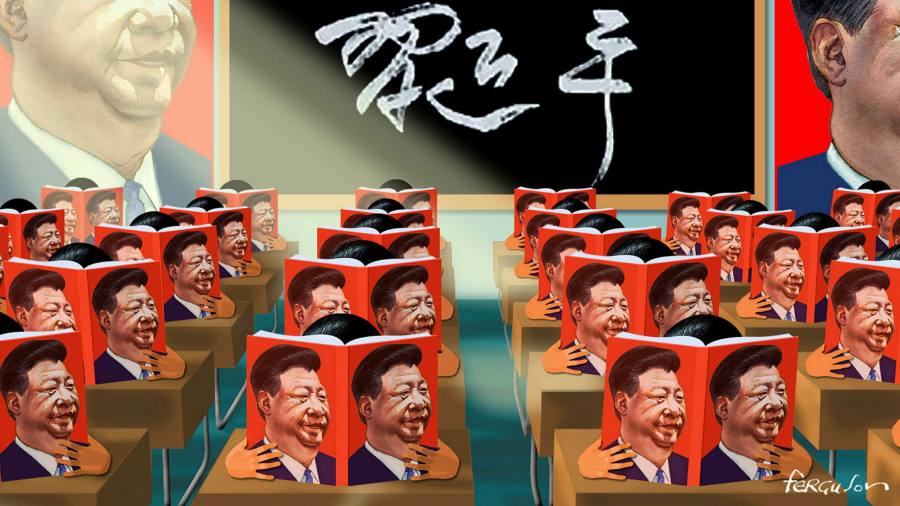 Sign up to myFT Daily Digest to be the first to know about Xi Jinping news.

Chinese children as young as 10 will soon be required to take lessons in Xi Jinping thought. Before they reach their teenage years, pupils will be expected to learn stories about the Chinese leader’s life and to understand that “Grandpa Xi Jinping has always cared for us.”

This should be an alarm bell for modern China. The state-led veneration of Xi has echoes of the personality cult around Mao Zedong — and with it, of the famines and terror unleashed by Mao during the Great Leap Forward and the Cultural Revolution. From Stalin’s Russia to Ceausescu’s Romania to Kim’s North Korea and Castro’s Cuba, the combination of a personality cult and Communist Party rule is usually a recipe for poverty and brutality.

These comparisons may seem far-fetched, given the wealth and sophistication of modern China. The country’s economic transformation in recent decades has been remarkable — leading Beijing to promote a “China model” from which the world can learn.

But it is important to make a distinction between the “China model” and the “Xi model”. The China model of reform and opening, put in place by Deng Xiaoping, was based on a rejection of the cult of personality. Deng urged officials to “seek truth from facts”. Policy should be guided by a pragmatic observation of what works, rather than the grandiose statements of Chairman Mao.

To allow officials to experiment with new economic policies, it was crucial to break with the fear and dogma associated with an all-powerful leader. Term limits for the Chinese presidency were introduced in 1982, restricting any leader to two five-year terms. In the post-Deng years, China has managed two orderly leadership transitions — from Jiang Zemin to Hu Jintao, and from Hu to Xi in 2012.

Term limits were also intended to solve the succession problem that often plagues one-party states. Henceforth, the party’s collective leadership would matter more than the charismatic leadership of a single man.

But, in the Xi era, the Chinese Communist party has once again embraced a personality cult. It incorporated Xi Jinping thought into its constitution at a congress in 2017. This was an honour previously granted only to one other leader, while still in power — Mao. In 2018, the Deng-era term limits for the Chinese presidency were abolished — setting the stage for Xi to rule for decades, if not for life.

The current intensification of the Xi cult, looks like preparation for next year’s party congress — at which the Chinese leader’s desire to stay on in power indefinitely, will have to be rubber-stamped by the party he controls.

Xi is almost certain to get his way. His supporters and organised sycophants will hail the move. How could they not? The Chinese leader is meant to be a “good emperor” — a wise leader, who is making all the right moves to modernise the country.

It is certainly possible to make a case for Xi’s signature policies — such as a crackdown on corruption and a more assertive foreign policy. The current campaigns to reduce inequality, and to control the power of the big technology companies, can also be justified.

But all of these policies could also easily go wrong. Intimidating Taiwan could lead to a needless confrontation with the US. Cracking down on big tech could frighten entrepreneurs and hobble the private sector.

The real difficulty is that if things do go wrong, it will be very hard for anybody to say so openly. All personality cults are based on the idea that the great leader is wiser than everyone who surrounds him. He cannot be acknowledged to have made mistakes. Chinese critics of Xi’s handling of the Covid-19 pandemic have been sent to prison. There will be no public inquiries or parliamentary hearings into the pandemic in Xi’s China.

The Xi cult is also intrinsically humiliating for China’s educated middle-class and senior officials — who have to study Xi thought daily on a special app. They are expected to express reverence for the leader’s musings and to parrot his favourite phrases, such as “green mountains and clear water are equal to mountains of gold and silver”. Anybody who finds this ritual objectionable or laughable, would be wise to keep their thoughts to themselves. The Xi cult means that insincerity and fear are now baked into the Chinese system.

Extending Xi’s leadership long into the future is also a recipe for a future succession crisis. The Chinese leader is 68 years old. At some point, he will no longer be fit to govern. But how will he be removed?

Xi’s creation of a cult of personality and his moves to become, in effect, “ruler for life” are part of a disturbing global pattern. In Russia, Vladimir Putin is also pushing through constitutional changes that will allow him to remain as president well into his eighties. Donald Trump used to “joke” enviously that the US should emulate China’s abolition of presidential term limits.

But the US has checks and balances, which have so far managed to thwart Trump’s worst instincts. In a country such as China — without independent courts, elections or a free media — there are no real constraints on a leadership cult. That is why Xi is now a danger to his own country.