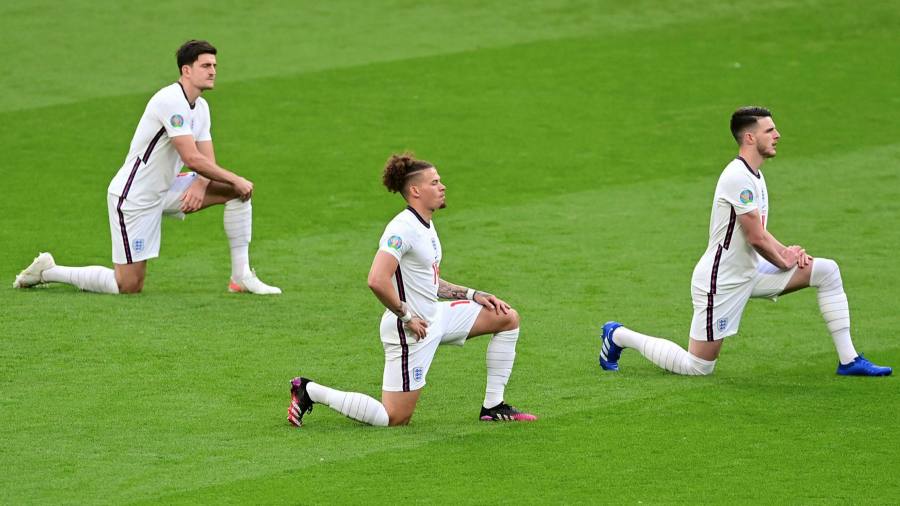 Sign up to myFT Daily Digest to be the first to know about Black Lives Matter news.

I’m sure I wasn’t the only one who let out a groan when Harry and Meghan released their latest “message” on Tuesday.

“As we all feel the many layers of pain due to the situation in Afghanistan, we are left speechless,” they wrote. “As we all watch the growing humanitarian disaster in Haiti . . . we are left heartbroken.”

I don’t mean to cast doubts on the sincerity of the Duke and Duchess of Sussex’s heartbreak, nor even on their rather voluble speechlessness. Given the prince has served in Afghanistan, I’m sure he does feel personally affected by what is unfolding there, but to me this statement seemed little more than gesture, and a somewhat hollow one at that. Yanis Varoufakis’s call for Afghan women to “hang in there sisters!” didn’t feel much more substantive.

On the day liberal-neocon imperialism was defeated once and for all, DiEM25’s thoughts are with the women of Afghanistan. Our solidarity probably means little to them but it is what we can offer – for the time being. Hang in there sisters!

And yet some gestures can have real power, and impact.

Last Friday, the new Premier League football season began. As they had done last season and during the Euro 2020 championship, players got down on one knee before kick-off as a statement against racism; an official video was also released asking for fans, some of whom have booed at the action, to support it.

UK home secretary Priti Patel has dismissed taking the knee as “gesture politics” — adopting a position for political reasons rather than to have a real impact — but the quiet act has a long history in the struggle for racial equality. Footballers who choose to take the knee can believe that Black Lives Matter without supporting the political organisation of the same name.

I can well understand why some players, such as Wilfried Zaha of Crystal Palace, don’t want to take part, because they feel taking the knee is “not enough”. Indeed, his refusal to take part is in itself powerful and a reminder that statements against racism need to be followed up by action and change. But it is moving to see a group of young men of different ethnicities join together in this way. I also believe it’s possible that even in itself, the gesture could have an impact, making racism in football less acceptable, and thus eventually less prevalent, even if not everyone taking part believes in what they are doing.

“Sometimes it’s worth simply indicating what our standards are — signalling them — even if we’re not ourselves living up to them, in part because it gives us something to hold ourselves to,” Kwame Anthony Appiah, a philosophy professor at New York University, tells me.

“If we make a gesture we invite other people to go along with whatever the gesture means,” says Appiah. “That can be useful because as more and more people recognise that something is important, there comes a point when there’s a kind of cultural shift when people actually do start living up to it, because you lose the respect of your peers and your reference community if you don’t.”

Taking the knee has gained support: 81 per cent of fans from ethnic minorities now see it as an important part of tackling racism in football, according to a recent YouGov poll, up from 61 per cent in March, with 58 per cent now seeing it as “very important”.

“Support for it grew during the [Euro 2020] tournament, I believe because it became more controversial,” says Sunder Katwala, director of British Future, a think-tank. “It was contested, it was booed, and it was argued over, so in a way, it became less meaningless, more meaningful, because it turned out there was still an argument to be had.”

There is also, it seems to me, a kind of transcendental power in the ritualistic nature of footballers taking a knee. In a secular world, football provides a way for us to sing together, embrace one another and join in a collective spirit that is not always a common feature of 21st-century life.

I dislike empty virtue-signalling — not only does it give the signaller a moral high ground that they have often not earned, but it also can give the illusion that an issue has been dealt with that often requires far more time-consuming work. Posting a black square on Instagram might ease one’s conscience but it does less than nothing to address racial inequality.

Not all signalling is hollow, however, and symbols and physical expression can have an impact that words alone cannot. Political gestures should not be conflated with gesture politics.