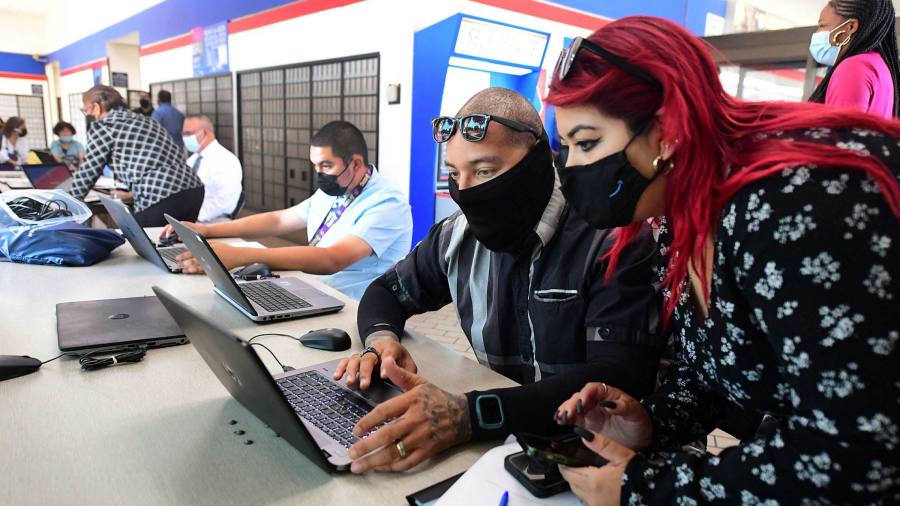 The writer is North American economist at Pimco

The US economy has transitioned quickly from an early cycle recovery from the pandemic. After initial expansion, it now appears to be rapidly progressing toward the dynamics seen in the latter stages of the economic cycle. Certainly, the US labour market is increasingly behaving in a late cycle fashion.

As a result, even if inflation moderates from current levels, labour markets at present justify the US Federal Reserve’s recent moves to signal a sooner and faster pace of monetary policy normalisation.

After US jobs data last week showed further falls in unemployment to near pre-pandemic levels, we now expect the Fed to begin rate rises at a quarterly pace in March and to start more aggressively winding down the balance sheet some time in the second half of 2022.

First, the US pandemic response relied more heavily on unemployment insurance than furlough schemes, likely resulting in lower job and labour market attachment. The OECD estimates that furlough schemes, including government subsidies to keep workers paid and employed, covered about 25 per cent of employees in Europe, with similar rates reported in the UK and Canada. These programmes were longer-lasting and more generous than the US’s equivalent Paycheck Protection Program.

Second, surveys suggest US households have had higher levels of health anxiety, which is likely to have contributed to a larger fall in labour force participation. According to a Commonwealth Fund cross-country survey, Americans were more likely to report suffering stress or anxiety since the outbreak. Elevated caregiving needs, as a result of less generous healthcare and childcare social safety net systems in the US, have probably contributed.

Third, a larger increase in US household wealth and a predominately private pension system support more flexible retirement timing. This was likely to have contributed to higher post-pandemic rates of reported retirements in the US.

Finally, labour market search frictions are also likely to be playing a larger role in the US as a result of higher remote working rates and migration out of urban areas.

This is probably related to the relatively high concentration of high-skilled service jobs in the US which has shifted the geographical location of demand for low-skilled service jobs such as retail, leisure and food services. Consistent with this, elevated levels of job vacancies are concentrated in states and regions with historically lower population densities.

As a result of all of these factors, the US labour force participation rate has fallen more (and recovered less) post-pandemic than in other developed markets, while the growth in job vacancies and outright wage inflation have also outpaced international peers.

To be sure, US wage acceleration appears concentrated in lower-wage service sectors. And US productivity gains, which have also outpaced international peers, have enabled companies to do more with less. However, wage gains have recently shown some signs of broadening out and companies report an increased ability to pass on higher input costs.

Overall, these labour market issues seem to justify the Fed’s recent actions to signal a sooner and faster pace of policy normalisation. However, despite this, broader financial conditions remain easy, raising the risk of a swift adjustment.

Indeed, over the next few months — a period when US inflation is likely to remain elevated before moderating later in 2022 — financial conditions could tighten more abruptly, as markets price in the risk of a more aggressive Fed tightening cycle. While this overshoot could eventually slow down the Fed’s progression, one thing seems more certain: the path of policy is likely to be more volatile than what we’ve seen in recent cycles.