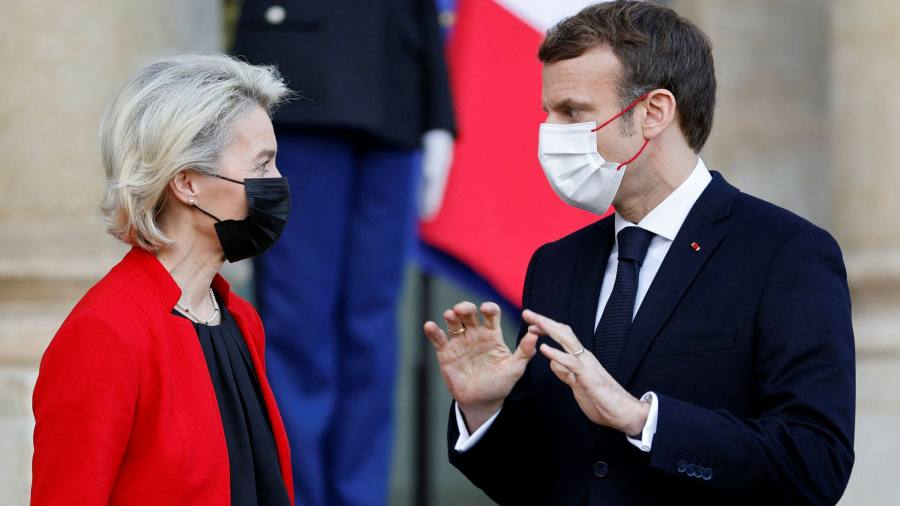 Although invoked almost daily in Brussels, the concept has remained aspirational, even abstract. Meanwhile, the EU faces real and specific menaces, with China blocking Lithuania’s exports and Russia threatening to invade Ukraine. This would be a good time to turn the EU’s undoubted clout in trade policy to strategic ends to resist pressure from hostile governments.

Enter, to the sound of bugles and the thundering of horses’ hooves, a cavalry charge led by Emmanuel Macron. The French president is leading the council of EU member states for the next six months — assuming he is re-elected in April — and will aim to overcome EU disunity and France’s own vulnerabilities to build European geopolitical power.

In theory, it’s just what the EU needs — leadership from a big member state with its own renowned military, intelligence and diplomatic capability. For the council presidency, Macron has adopted a rallying cry — “relance, puissance, appartenance” (“recovery, power, belonging”) — with more than a whiff of revolutionary zeal. He also has a personal motive to build European strategic power independent of its traditional allies, following last September’s humiliation of being ambushed by the Australia-UK-US (Aukus) security pact and its deal on nuclear submarines.

With excellent timing, the EU is creating a new trade weapon, a legal “anti-coercion” instrument, which France wants to fast-track. The tool will allow rapid retaliation with trade, investment and financial measures against illegitimate pressure from foreign governments. In the future, it will hopefully deter the likes of China from bullying EU states such as Lithuania.

Sign up for Alan Beattie’s Trade Secrets newsletter, sent every Monday exclusively for premium subscribers. If you would like to upgrade to Premium, please click here

The first is foreign policy disunity within the EU towards China, Russia and the US. Macron is frequently at odds with some member states in the eastern half of Europe, in particular over his previous emollience towards President Vladimir Putin. Given Russia’s belligerence over Ukraine, and the Russia-linked mercenaries sent despite French objections to Mali, where France is winding down a peacekeeping force, that looks to have been a bad bet.

Similarly, despite being critical of Chinese trade policy, Macron in 2020 unwisely succumbed to German persuasion to support the EU’s bilateral investment agreement with China. The deal, now mercifully suspended, caused dismay across the EU and within Joe Biden’s incoming administration in the US for making Europe look weak.

Indeed, Macron’s sceptical attitude to the US suggests he is overly animated by French interests, particularly the Aukus episode. Given Biden’s foreign policy vacillations and the possibility of another Donald Trump presidency, he is right about the risks from reflexive Atlanticism. But other European countries such as the Baltic states are not confident the EU, with its limited trade and financial sanctions instruments, can take over. The US is Russia’s main interlocutor in this week’s talks in Geneva on European security: the EU institutions are not invited. Support from other member states for France’s fury over the Aukus deal was slow and muted.

Second, France is often too politically vulnerable domestically to wield trade as an effective strategic weapon. A slightly childish but symbolically unequivocal way to punish Australia over Aukus would have been to complete the EU’s nearly finished bilateral trade deal with New Zealand, a country that bans nuclear submarines from its ports, while blocking a parallel Australian agreement. But both countries are beef exporters, France’s presidential election is coming up and the country’s cattle farmers are notoriously noisy. Paris has elected to delay both deals until it’s someone else’s problem.

Notably, the “strategic autonomy” slogan started life as “open strategic autonomy”, but France last year argued vehemently for dropping even an abstract reference to free trade. There is concern among other member states that the anti-coercion tool that France strongly backs will end up being used for protectionist rather than strategic purposes.

Finally, to realise its ambitions for the EU, France needs Germany on board. Macron may have been soft on Russia and China but Germany has hitherto proved mushy to the point of liquefaction. German industry has criticised Lithuania’s defiance towards Beijing and is lobbying against decoupling from China. Earlier this week, Philippe Léglise-Costa, France’s ambassador to the EU, sounded distinctly lukewarm about a confrontation over Lithuania. He told a Brussels seminar that, while member states should show solidarity with Vilnius, the EU should pursue any violations of trade law through the usual channels at the World Trade Organization and seek a negotiated solution.

French cavalry charges have historically been magnificent to watch, but in an EU context they are more often heralded than executed. The case for centralising some strategic power in the EU is strong. But Macron’s ability to deliver will require more European unity and French domestic resilience than are currently on display.