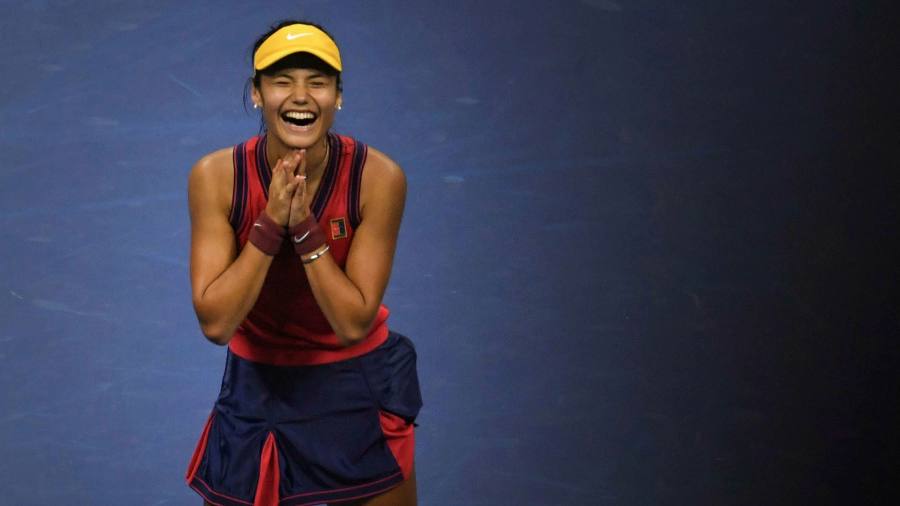 Sign up to myFT Daily Digest to be the first to know about Sport news.

There is something misleading about “open” tennis tournaments. The US Open, the French Open — they are open to all, just like the Ritz. The contenders come from a small elite circuit. Most have met before, and will meet several times again. They know their destiny is to lose to Novak Djokovic or, until recently, Serena Williams.

But occasionally a player makes a tournament seem truly open. On Thursday in New York, an 18-year-old teenager from Kent injected an almost unthinkable spirit of possibility into the US Open. Emma Raducanu became the first person to make the final of a tennis Grand Slam after going through the qualifying rounds.

Raducanu had never played the US Open before; she had never played another top-level tournament except as a wild card. She is the first British woman in a Grand Slam final for 44 years. So far at Flushing Meadows, she hasn’t lost a set or even been taken to a tiebreak. In qualifying, she played the world numbers 285, 167 and 96. Now she’s playing for $2.5m.

Raducanu emerged at Wimbledon two months ago, reaching the fourth round, while awaiting her A-level results. Immediately she represented a certain vision of Britain. She was born in Canada, her mother comes from China, her father from Romania, both finance workers. Her social media accounts say: “london | toronto | shenyang | bucharest”. This week the tabloid Daily Express gave half its front page to “history maker” Raducanu, and the other half to the headline “Migrants Will Be Turned Back to France”. Irony died.

Raducanu’s opponent in Saturday’s final, Canada’s 19-year-old Leylah Fernández, encapsulates internationalism too. “There’s a lot of talk in the news about immigrant people,” her Ecuador-born father Jorge told The Sports Network. “We’re an immigrant family and we had nothing . . . Canada opened up its doors.”

Most of all, however, Raducanu and Fernández embody carefree youth. The Brit breezed on to the court for her semi-final looking amused. I’ve seen people more nervous asking for a table at Pizza Express. At Wimbledon, she suffered breathing problems and had to withdraw. In the US semi-final, she gave up seven break points in her first two service games, but barely flinched. “The nerve this girl — this young woman — has is just amazing,” commentated Martina Navratilova, the four-time US Open champion.

Top-level sport is weighed down by results, records, rule changes. But Raducanu and Fernández have the innocent excitement of just taking part. After years of work, the pressure is actually off: they finally have their foot through the door, and time is on their side. Asked how she would handle the expectation of the final, Raducanu laughed: “Is there any expectation? I’m a qualifier.”

Fernández said: “There’s too many things that’s happening right now that I love. I was able to meet Billie Jean King! I was able to meet Juan Martín del Potro!” Most of us won’t meet Billie Jean King, but we might once have started out in the adult world and felt just amazed to be on the ladder, to find that we could do the things we so admired in others. Jeff Bezos and other billionaires can invest in the search for immortality, but they can’t hope to recapture that feeling.

My one sadness watching these teenagers is that we know how fame plays out. Youth is wasted on the old. The public expects nothing then expects everything. What happens when Raducanu makes a harmless joke, like 19-year-old Andy Murray did by saying he’d support anybody but England at football? Naomi Osaka, once a teen sensation, declared after losing last week: “when I win, I don’t feel happy.”

Whatever comes next in Raducanu’s career, let us savour these unexpected, uncomplicated moments of joy. Perhaps they might even jog us to remember when we felt some corner of the world open up to us.