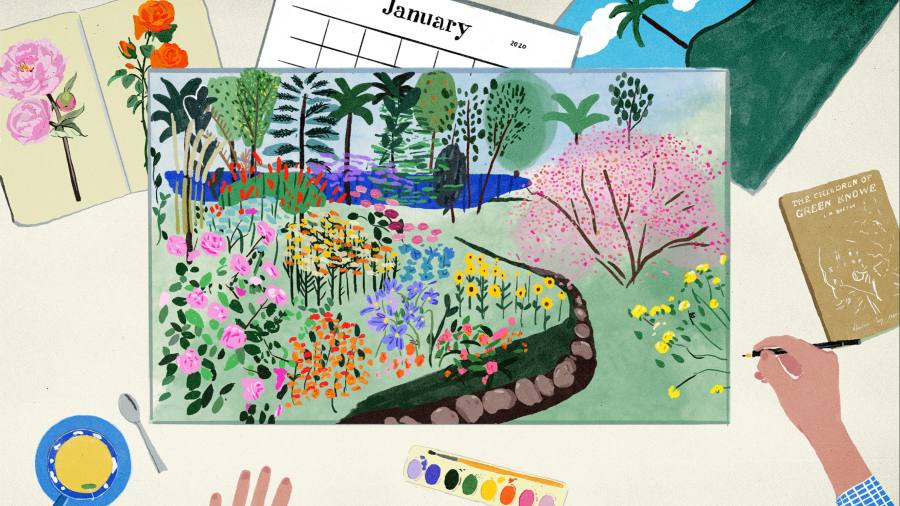 Sign up to myFT Daily Digest to be the first to know about Gardens news.

For the past year, I’ve been restoring a walled garden in Suffolk. It belonged for a long time to a garden designer, who laid it out in the 1960s as a series of rooms with artfully planted hedges of beech and yew. After his death, the garden grew wilder, the magnolia shading the roses, the cherries toppling one by one.

I first saw it last January, just before the pandemic stopped the clock, and fell in love immediately. It was as if I’d always known it, as if it had arisen from my childhood reading, so closely did it resemble the enchanted lost gardens of Frances Hodgson Burnett and The Children of Green Knowe. In the confusing months that followed, I drew it obsessively, trying to map it with the help of photographs.

The dream plot floated above the real. I burrowed into it during the long, static months of lockdown, making gloating lists of the plants that had once grown there. I knew there was a daphne and a tree peony, but what about Carpenteria californica, the tree anemone, or chinoscilla, also known as glory of the snow, or the fragrant pineapple broom?

We moved in August and this fantastical, glowing, disembodied space was interrupted by a real and much more problematic garden. There was indeed chinoscilla, appearing as a sea of blue stars in March, but there was also honey fungus, which had half-killed a flowering currant and a beautiful hybrid cockspur thorn. Beds were infiltrated with nettles and bindweed. As the months went on I saw which thugs had thrived and which more delicate plants were in danger of being strangled or had vanished altogether.

All year, the garden as it was pulled against the garden as it could be, not to mention the perfect garden of the past. I was lent five photo albums dating back to the 1970s. They showed immaculate lawns, edged by beds that were somehow both abundant and orderly, testament to immense skill and an era of fertiliser use no longer thinkable.

The garden that I dreamt of was wilder in temperament, but just as luxuriant. The problem was cajoling it into being. I was out all day, often in pyjamas, too impatient to get dressed. I plotted planting schemes, steered conversations back to compost and seeds, and generally acted like I was obsessed.

There were successful innovations. One winter afternoon, I planted the small lawn by the greenhouse with bulbs of fritillaries, Tulipa clusiana and a very blue camassia, and left it to its own devices. By spring it was a scruffy meadow, touched with the colours of an illuminated manuscript. There was a hedge of pleached hornbeams behind, and I planted a foam of sweet woodruff and white foxgloves at their feet. I bought six goldfish to flash like those in Virginia Woolf’s last novel, Between the Acts, much of it set in a garden.

Each new plant came trailing associations, from my own life and from my reading, and each one enriched the garden, deepening its power. At the same time, the problems quickened. The myrtle was scorched by snow, while the Magnolia grandiflora dropped three-quarters of its leaves before producing a fresh set, followed by creamy lemon-scented flowers.

At the end of the garden there was a feral space, enclosed by walls on three sides and a dense yew hedge. There had been a wedding there and the centre was still covered with ragged black plastic. A virulent crop of hemlock had sprouted, but there were also hellebores, violets and shuttlecock ferns. At night, I imagined a new garden there, planted with wild roses — the pale yellow Cantabrigiensis and the white Dunwich rose. I’d make a pond, and around it there would be quince and crab apple, and peonies with single flowers in clear, clean colours, butter yellow and wine red.

Which did I love more, the real garden or the dream? Sometimes the gap between them was unbearable and yet I couldn’t do without either. I am aware that I am describing two kinds of love: the ideal and the actual, and that the work of love, the labour of knowing and caring for something real, is always illuminated by the longing for this more perfect thing, which haunts daily existence without ever quite coming into being.

I often think while in the garden that the greatest happiness comes when I am in both states at once, working and dreaming together — which, now I think of it, makes gardening not so dissimilar from love itself.

Olivia Laing’s latest book is “Everybody”. She is currently working on a book about gardens and paradise