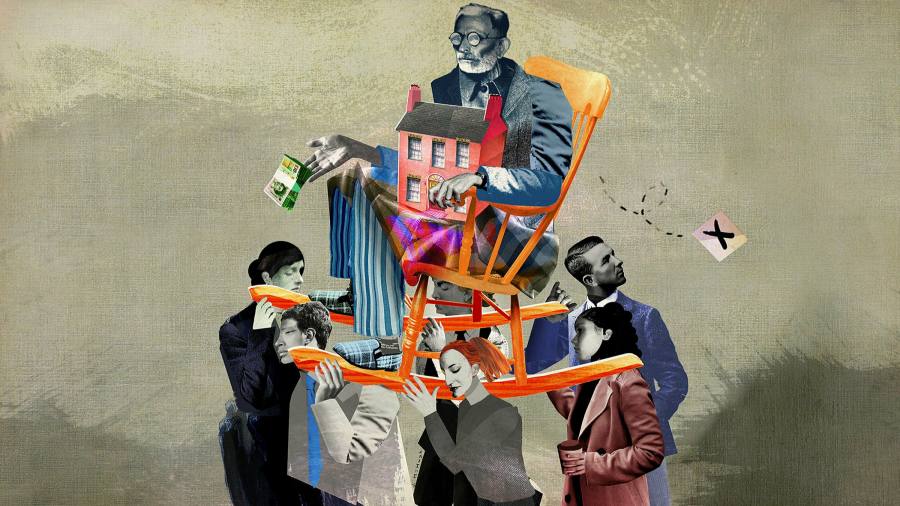 Sign up to myFT Daily Digest to be the first to know about Ageing Populations news.

The writer is author of ‘Extra Time: Ten Lessons For Living Longer Better’

Ouch. Almost 20 years after Tony Blair promised to “fix” social care, Boris Johnson has grasped the nettle — and seen his poll ratings fall. How this plays out, for him and for the country, will depend on two things. Can he revolutionise the NHS and social care, not just pump money in? And can he bring the generations together, not push them further apart?

The prime minister has injected new funds into services which primarily support the old, by raising a tax which falls largely on the young. His raid on National Insurance, which takes the UK’s tax burden to a historic high, was devised to tiptoe around the grey vote which skews Conservative. But the early polls suggest that group is not grateful. They don’t Iike tax rises at all, including on their grandchildren.

Politicians are afraid of the old. President Emmanuel Macron has still not managed to raise the French pension age above 62, although the country’s average citizen now lives to 83. In Greece, a top court has forced the government to reverse pension cuts after an outcry. Meanwhile, the Spanish government is paying bribes to persuade people to keep working past 66. In the UK, the Labour leader attacked the prime minister for taxing lower and younger earners but simultaneously insisted he guarantee that no one would ever have to sell their home to pay for care.

These contortions are driven by the growing numbers of over-65s — they make up 20 per cent of the population of those countries I’ve mentioned — and their legendary propensity to vote. The courting of this group in the UK has led to a haphazard accumulation of perks: the free bus pass, the winter fuel allowance and the £10 Christmas bonus for pensioners, introduced as a temporary measure in 1972 but still with us today. The triple-lock on pensions has raced ahead of inflation, taking the average incomes of UK pensioner households past those of working age households for the first time (although one in five pensioners still lives in poverty).

Longer lives and falling birth rates are stretching the social contract to breaking point. For the past 50 years, citizens of industrialised countries have expected that if they worked hard and paid tax, they would get rising living standards, a welfare safety net and a pension. That contract was a powerful expression of social solidarity. But now, there are fewer young people to support older generations. And baby boomers have amassed a growing share of wealth. Households headed by 30-year-olds are now only half as likely to own their own homes as baby boomers were at the same age.

Property — and the desire to pass it on to one’s children — is a strong undertow in British politics. The house price inflation of the past 20 years, stoked by successive governments, has turned many Englishmen’s homes into castles of unexpected wealth. Home-owners’ determination to fortify these castles against the taxman has been a major obstacle to social care reform. In 2017, Theresa May had to back down, amid howls of outrage, after sensibly proposing to cap the highest costs but ask people to contribute from their estates after death.

The passionate rows within the Conservative party over social care reflect the fear that older voters will resist any assault on their wealth — but also the recognition that many are grandparents, who are deeply concerned about the impact of high borrowing and tax upon future generations. In fact the much-maligned baby boomers are the new “sandwich” generation: standing at the school gate to pick up their grandchildren, acting as the Bank of Mum and Dad, and sometimes caring for their own elderly relatives. In the US, almost a quarter of pre-school infants are cared for by a grandparent and one in ten lives in a household headed by a grandparent. In the UK, unpaid caregivers, often caring for a spouse, save the state more than £10bn a year.

So politicians may be running scared of a caricature which isn’t entirely accurate. They don’t help by sustaining the myth that 65 is still “old”. We urgently need to update our welfare state to reflect the fact that many older people are still working — and should not be exempt from National Insurance — while others are beset by chronic disease and do need support. We need to start seeing the over-65s as a national asset, not a liability.

The current social care system is riddled with unfairness. It will not be truly fixed until everyone pays in and has a stake. But it will get support if it becomes far more ambitious for the frail and disabled; ends the loneliness which propels so many into care homes; lets professional carers use their judgment, not follow tick boxes; and recognises that unpaid carers, who put their lives on hold to care for loved ones, are the backbone of Britain.

People often ask me why it has taken so long for any government to tackle social care. The shameful truth is that we don’t want to think about it, save for it or pay for something which we each hope we will not need. Some people assume that they will be cared for on the NHS; others believe they have already “paid in” through National Insurance. Unfortunately, neither is true. But politicians have been afraid to admit it.

Stinging the young to pay for the old wasn’t the best way to pay for social care. But without meaning to, the prime minister has raised the stakes. If he revolutionises the service, the old will be happier to stump up: and the young may face less of a sting in the tail.