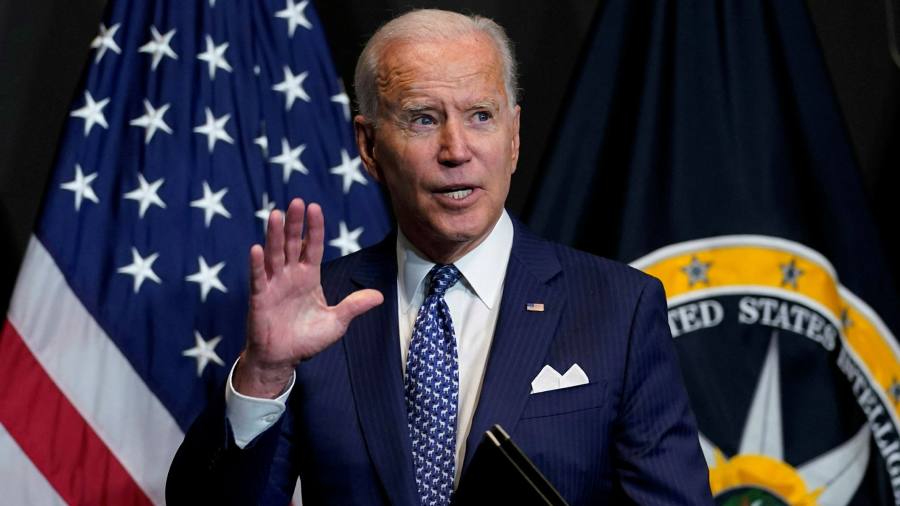 As rumpuses go in calm, post-Trump Washington, it will have to do. This summer, Catholic bishops discussed withholding communion from no less a personage than the US president. The gesture was twice foolish. First, whatever Joe Biden’s line on abortion, neither his pastor nor the Holy See support his exclusion. Second, and here the clergy will have to forgive a dip into earthly politics, they only served to highlight the president’s stalwart churchgoing. There are White House staff who have done less sterling work for his image.

Here, in miniature, is US conservatism’s Biden problem. What he is — old, white, conventional to the marrow — strikes voters more vividly than what he does. And so, after six bold and sometimes rash months as president, he is more or less unmarked by the slur of radicalism. Even in its diminished state, his approval rating is above the 50 per cent that eluded his predecessor. After his first 100 days, which were hailed and damned for their largeness of ambition, voters saw him as more moderate than Barack Obama at the same point.

The telling comparisons do not stop with his old boss. Had a President Hillary Clinton pulled US forces from Afghanistan with Biden’s speed, she would have been framed as a peacenik. Who will try that line against the father of a veteran? Had President Bernie Sanders overseen a national crime surge, it would have been pinned on the left’s innate laxity. Sponsorship of a severe crime bill in 1994 spares Biden that charge. By dint of biography, even identity, the president has special latitude.

With it, he is acting out that US paradox: the fuddy-duddy reformer. Just as a blue blood, Franklin Roosevelt, made the New Deal, and a coarse Texan, Lyndon Johnson, passed civil rights, a 78-year-old bane of the left could enact three spending bills worth more than $1tn each in one year. The principle at work here is that which moved John le Carré to say Britain’s private schools should be closed and its royals reined in — “by a Conservative government”. Voters trust the business of change to those who don’t seem excessively keen on it.

In Biden’s case, this implicit trust is quantifiable. Rarely have a politician’s polling numbers been so engrossing in their tedium. From December 2018, before he had even declared his candidacy, to spring 2020, he led the Democratic primaries with almost perfect consistency. Against Donald Trump, he kept up a lead for 14 metronomic months before the election of last November. Since his inauguration, he has had not the highest but the steadiest approval rating of any postwar president.

Everything suggests that most Americans settled their view of this man, a half-century fixture of their public life, years ago. He does not inspire their enthusiasm but then nor does he arouse their fear. It will take a lot for them to see him anew as a Manchurian Candidate for hard-left string-pullers.

The consolation for the right is that Biden presents both parties with a problem. For now, it is the Republicans who must adjust. Having lived by the shallowness of politics — the wide but false sense that Trump was strong and business-savvy — they are now its victims. Biden need only appear on screen, invite God to “protect our troops”, and the left seems farther away from his administration than it sometimes is. He is a shortcut to the trust that Democrats would otherwise have to toil for. Such is the power of gut impression, or what the pollsters call “valence”.

What he cannot do is self-replicate. For Democrats, the awkward fact about Biden is that there is one of him. Senator Joe Manchin aside, perhaps, he is the party’s last high-profile incarnation of the white, gruff, often Catholic voter who anchored the New Deal alliance in the middle of the last century. Every other plausible leader draws from the liberal urbanites who infused the party thereafter. Vice-president Kamala Harris, House of Representatives Speaker Nancy Pelosi, cabinet rookie Pete Buttigieg, Senator Elizabeth Warren, the Congressional “squad”: all incur reflex suspicions. Some of these are ideological and therefore fair enough. Some are too atavistic to need spelling out. Either way, Democrats should not get used to the political licence that Biden confers on them.

He will turn 82 in the month of the next presidential election. While no Dan Quayle, the vice-president and presumed heir can be maladroit at national level. It is said often enough that, as Trump primes to run again, the Republicans have a quandary ahead of them in 2024. It is, as so few things are, cross-partisan.