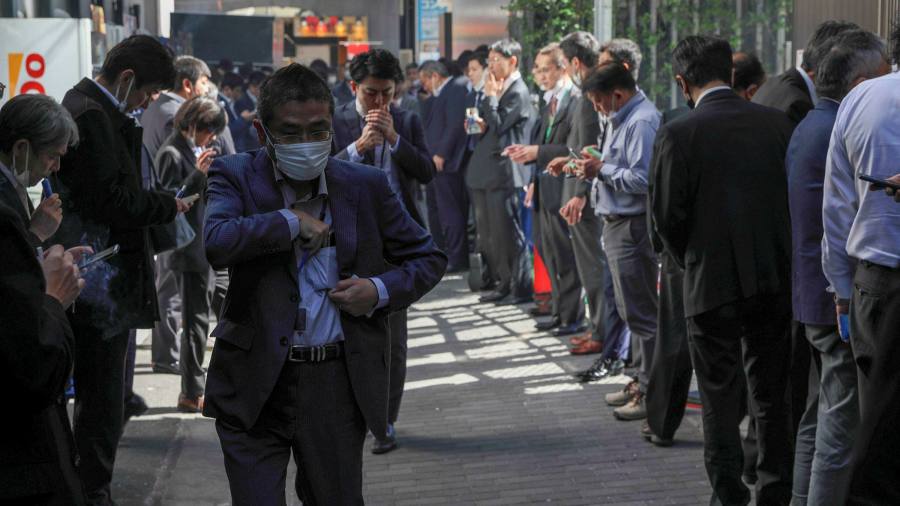 Sign up to myFT Daily Digest to be the first to know about Management news.

When historians look back at the nature of work in the second half of 2021, they will find some odd developments.

A US president has ordered large companies to insist their staff get vaccinated against a virus or submit to weekly testing. Wall Street banks have barred people from their US premises who have not had the vaccine. Amazon has offered UK workers a £50 weekly bonus if they manage to turn up to work on time.

Yet the move that surprised me most came in Japan, where the Nomura brokerage firm has just said staff will be banned from smoking on the job, even when, as a Daily Mail headline put it, they are “working from HOME”.

I share the Mail’s dismay. Smoking is a noxious habit, but it is also an addiction. For a boss to say people cannot smoke inside their own homes, where they do lots of other unwise but legal things, crosses quite a threshold.

Other companies in Japan have taken bold steps to stop their staff from smoking but I did not imagine it would be easy, or legal, for a British company to prohibit it at home. The mass move to working from home may have changed this. We cannot know for sure if such a ban is legal because it has not yet been tested in court, says Jo Mackie, head of employment in London at the Slater and Gordon law firm. “However I think it’s going to be possible,” she told me last week.

Employers already had a legal duty to protect their workers’ health and safety pre-pandemic. That duty carried on despite Covid, which is why many British employers have been checking to make sure staff at home have a decent chair and a laptop at eye level.

If widespread homeworking is here to stay, which seems likely, Mackie thinks an employer could successfully argue that, since the law forbids smoking in a substantially enclosed space in a workplace, the room a person works in at home should be smoke-free too.

“It will make people unhappy,” she says, but it would not stop them going outside for a cigarette. The big question is, to what extent does the law define a home office as a workplace and as Mackie says, “post-pandemic, that’s much more of a blurred line than it used to be”.

None of this should be a bother if you work at a place like the World Health Organization. As far back as 2005 it announced it had a new hiring policy: smokers need not apply.

The rule still stands, the UN agency told me last week. Anyone applying online for a job there is asked if they smoke or use tobacco products, and whether they would keep doing so if hired. If the answer to both questions is “yes”, the applicant is out. Anyone who lies about smoking and gets hired faces disciplinary action if they are ever found out.

One can see why a global health agency would do as much as possible to stamp out tobacco, a leading cause of preventable death that kills more than 8m people worldwide each year. But what about a moving company?

In the US last year, the U-Haul moving and storage company became one of the first major groups in its sector to declare it would no longer hire “nicotine users”. The business employs more than 30,000 people in the US and Canada, and said the new policy was part of an effort to promote a culture of wellness, “with the goal of helping our Team Members on their health journey”.

The health journeys are only taking place in the 21 US states that allow such a hiring ban, and U-Haul is offering current staff help to quit. But considering that smoking is an addiction that overwhelmingly afflicts the poor and disadvantaged, even some anti-smoking campaigners feel queasy about such measures.

“In the old days everyone smoked,” says Deborah Arnott, chief executive of the UK’s Action on Smoking and Health charity. That has changed, she adds, and blocking poorer or less educated people from work because they smoke “doesn’t seem right or fair”. Better for bosses to help staff to quit, rather than bully them or refuse to hire them. I agree. Smoking is a scourge and the sooner it ends the better. But when it comes to stamping it out at work, employers should tread very carefully indeed.