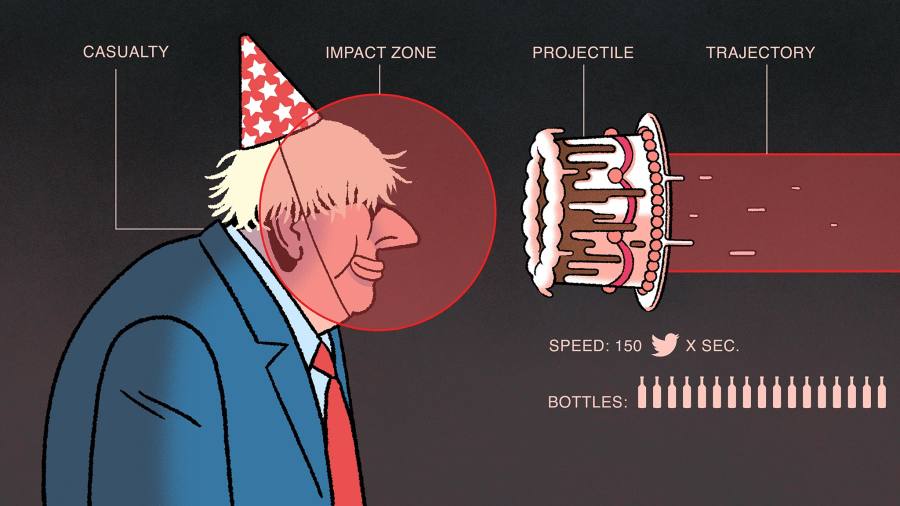 The thing is, it probably wasn’t even that good a party. This perhaps is the greatest unfairness of all. At time of writing, it is unclear just how long the list of political casualties from the lockdown-breaching Downing Street BYOB bash may be, but those who don’t make it back are going to spend the rest of their lives asking, was it really worth it for a glass of lukewarm merlot and a bit of cheese roulade?

At least the illicit Downing Street press office party on the eve of the Duke of Edinburgh’s funeral had a suitcase full of booze, a DJ and a broken child’s swing. What did the deadly drinks bash have? Look at this from Boris Johnson’s point of view: the man was in the Bullingdon Club for heaven’s sake. Say what you like about the Bullers, but they know how to hold a memorable bash. This event would not even classify as a decent pre-drinks. Nothing appears to have been broken (well, apart from the law). There is no evidence that the neighbours complained. No one was sent round the next day to make good the cost of the damage. The most illicit items were a few sausage rolls and a trestle table. It’s not exactly the Hellfire Club. All things considered, it sounds about as much fun as Jacinda Ardern’s wedding.

In fact, when you look at it this way, of course Johnson didn’t think they were parties. How could it have been a party if no one stormed next door to the chancellor’s office, smashed up his £200 heated coffee mug, whacked a few billion on the deficit or left a steaming great National Insurance rise on his desk? Did anyone dash up to the Downing Street flat and scrawl obscenities over the new wallpaper? Were there any rugby songs about Keir Starmer? Well then . . . call that a party?

For this prime minister to be brought down by such tame behaviour is not only disastrously off-brand, it is, frankly, unfair

Those are the kind of sackable offences you can tell your grandchildren about. Most of the other great lockdown breaches had a bit more to them. People were seeing or acquiring lovers, dashing between second and third homes. Even Dominic Cummings’ eyesight test had a touch of originality.

Admittedly, this is not the kind of behaviour you want to advertise in a Downing Street email: “Hello, I thought we’d take advantage of this glorious weather by defying the lockdown rules, debagging the secretary of state for transport and leaving him tied up on the Circle Line. Bring your own duct tape.”

Remember the prime minister’s defence is that he “implicitly” believed the BYOB garden party was in fact a work event. Of course he did. Bullingdon Boris doesn’t think that trundling through the garden saying “Thanks for all your hard work” qualifies as a social event.

For this prime minister to be brought down by such tame behaviour is not only disastrously off-brand, it is, frankly, unfair. Yes, it has that hallmark flouting of the rules. But seriously, no party that reaches its apogee when the principal private secretary says “Now prime minister, you know Steve from data research,” is a bash worth losing your job over.

And, yes, there may have been a couple of birthday parties attended by key Downing Street personnel such as his interior designer but, play fair, you don’t get anyone jumping out of a Colin the Caterpillar cake. This is death by a thousand slices.

Interestingly, the “Call that a party?” defence is the one being deployed by a number of the prime minister’s defenders. Although what the parties lacked in quality, they made up for in quantity.

(Johnson allies also argued that the tensions over Ukraine make this a bad time for infighting. This argument makes sense although it is intriguing to imagine the conversations in the Kremlin about this. “We have bad news Vladimir Vladimirovich. The British have just overthrown Johnson. They have found a leader even tougher than the man who held the Colin the Caterpillar cake party. We better get the tanks back to Donetsk and fast.”)

Now I have been to some dismal dos in my time, but I can honestly say that I could not have mistaken even the very worst for a work event and, frankly, this is not what the nation expected of this prime minister. Johnson is meant to be the disrupter-in-chief, the devil-may-care, smash-the-blob, let-the-good-times-roll premier. If he goes down for illicit gatherings, we had a right to expect hard drugs and criminal damage, not cheese and wine, and “for he’s a jolly good fellow”.

We understand of course that the real crime here — apart possibly from crime — is hypocrisy. But there is also disappointment. The people of Britain had expectations of this leader: that when he threw an illegal party it would be a good one. The only thing worse than being remembered as the premier brought down by a BYOB bash is to be known as the man who put the conservative back into Conservative parties.