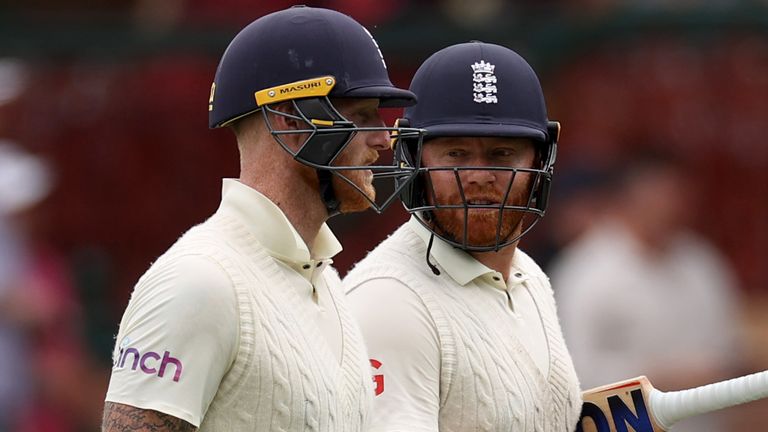 After their brave display with the bat to save the Sydney Test, Skipper Joe Root has announced that Johnny Bairstow and Ben Stokes are likely to feature only as batsmen in the fifth and final Ashes Test in Hobart.

The first day’s play get’s underway on Friday morning at 3:00 am.

Stokes picked up a side strain when he was bowling in Australia’s first innings of the Sydney Test, while Barstow picked up an injury, during his magnificent century, when he was struck in the hand by Australia skipper Pat Cummins.

The England Captain gave an update on both players in today’s press conference.

“We’ve got to just see where they’re at,” “We have to see what their bodies can handle and then assess everyone. “You certainly can pick Ben just as a bat and similarly Jonny as well – he’s been playing as a batter anyway.”

England is already 3-0 down in the Series and earned a miraculous draw at the Sydney Cricket Ground to save the fourth Test batting out the whole of the final day. Stuart Broad and James Anderson survived the final two Overs of an enthralling final day to thwart the Aussies from taking a 4-0 lead.

With Jos Buttler out due to a broken finger, it gives an opportunity for Sam Billings to make his Test debut. The Kent Spitfires captain averages 40+ in List-A cricket, which is decent, considering he is more of a white-ball specialist.

Speaking ahead of the Hobart Test, Root also outlined the importance of finishing the Series on a high.

‘We must harness that last-day performance’

“If you look at the week that we had – whether it be Covid leading into the game, a couple of injuries that we had to manage throughout the game as well – it shows a lot about where we’re at as a team,” said Root.

“It was on the back of three very difficult games where we’ve underperformed and not shown the best of our skills so we showed a great amount of character, and it is definitely something for us to build on moving forward.

“The desire, the fight, and the pride that everyone showed out there, and that last day, in particular, is something that we have to harness and we have to play with more frequently throughout five days.

“We’ve proven to ourselves that we can do that now.”

Since the famous 2010/11 Series victory under Andrew Strauss, England has yet to win a Test match in their last two Series Down Under. They suffered a 4-0 defeat in 2017/18, which was Root’s first Ashes Series as Captain.

Former England Captain Michael Atherton believes that the duo should not play unless they are fit to do both jobs.

“If the medic said, ‘you must definitely not play him, he is going to harm himself’, then that is a decision probably taken out of the captain’s hands but my suspicion is that is not going to be the case. “I think it will be a case of Joe speaking to Stokes and Bairstow, two senior players who must know their bodies better than most. The bowling equation with Stokes is going to impact on the balance of the side.”If England only go with four bowlers on a green-looking pitch, would they play Jack Leach or would Root be the main spinner? Those questions hinge on Stokes’ ability to bowl.”

Meanwhile, in Australia’s camp, there is a selection headache for Cummins, in terms of the number five slot. Tarvis Head, who scored a brilliant 152 in the First Test is back from isolation, after testing positive for COVID. However, after watching Usman Khawaja score a magnificent Ton in the second innings in Sydney, it is unlikely that he will make way for the South Australian Left-Hander.

England may be out of the series, but they can still restore some more pride to the country by winning or avoiding defeat in Hobart.

Can they leave Australia’s shores with a victory, find out on World in Sport