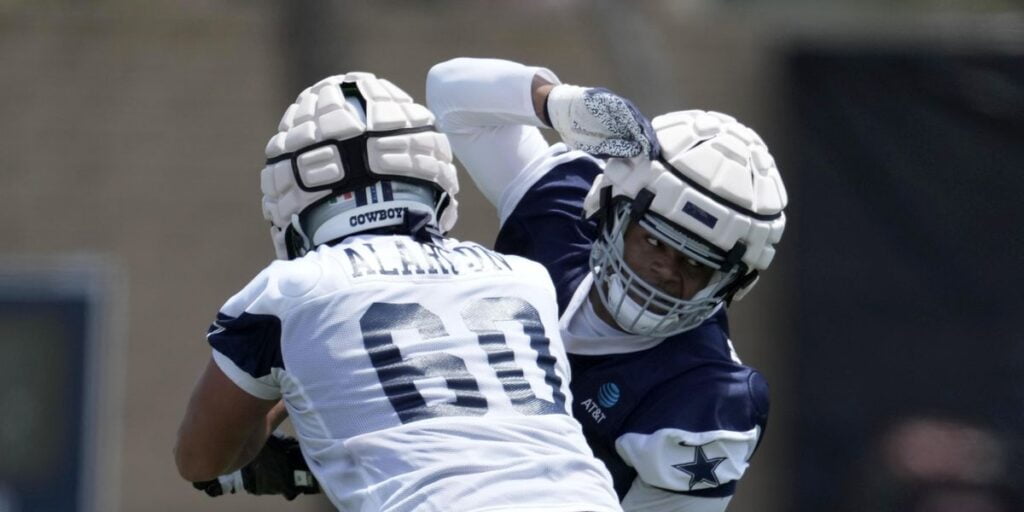 The Cowboys drafted with their immediate needs in mind this April, looking for prospects that were ready to help replace what their 12-5 team lost in free agency. Just two training camp practices in, they have a clear plan for first-round pick Tyler Smith to work at left guard and tackle, and third-round wide receiver Jalen Tolbert is constantly working on his connection with Dak Prescott.

Lawrence’s experience is more important than ever this season, as Dan Quinn looks to work in new faces but keep the Cowboys defense as a team strength.

Lawrence has helped multiple defensive ends find their best form in Dallas by setting up one-on-one matchups, and doing so for a player he said “doesn’t realize” the pass rush tools he has could yield immediate results for Williams.

DeMarcus Lawrence says his first impression of defensive end Sam Williams is that the rookie “doesn’t realize” just how many tools he already has in his toolbox.

I asked if he believes Williams can make an impact on Day 1:

Williams has been preparing for the work he’s getting at training camp since his Ole Miss pro day, with Quinn in attendance to take special interest in the prospect that compared himself to Micah Parsons.

Williams on the Cowboys:

"They're on me a lot. Mr. Jones said he needs another Micah Parsons. I'd love to be a Cowboy."

His son joined him and it was great. pic.twitter.com/AJq06TmzbA

Parsons has, as expected, been a big part of the Cowboys pass rush so far in camp as well, further crowding the depth chart for Williams to earn his snaps.

Even with the versatility to rush off the edge or inside, Williams faces a long list of players with at least slightly more experience than him.

Cowboys DC Dan Quinn on working out rookie DE Sam Williams at Ole Miss’ pro day: “Leaving the field that day, I remember telling Mike (McCarthy), ‘I’d really like to coach that guy.’ Most of the time when you have that feeling, that’s usually good.” pic.twitter.com/Ibz78w7QqA

With the Cowboys secondary getting their hands on the ball in team drills so far, the defense is firmly ahead of the offense with the advantage of unpadded practice. Sam Williams’ strength and hand play along the line make him a top candidate to continue playing well when these padded practices get more intense, and carry that momentum well into the preseason.

Training camp is generally a time to be optimistic about a roster, and so far the Cowboys appear to have their top three draft picks in the best position to contribute early in their rookie campaigns.

Smith and Tolbert have the benefit of playing positions where the Cowboys clearly needed new starters, but it seems like Sam Williams is ready to compete in the trenches to earn playing time alongside Lawrence and the Cowboys first-team defense.