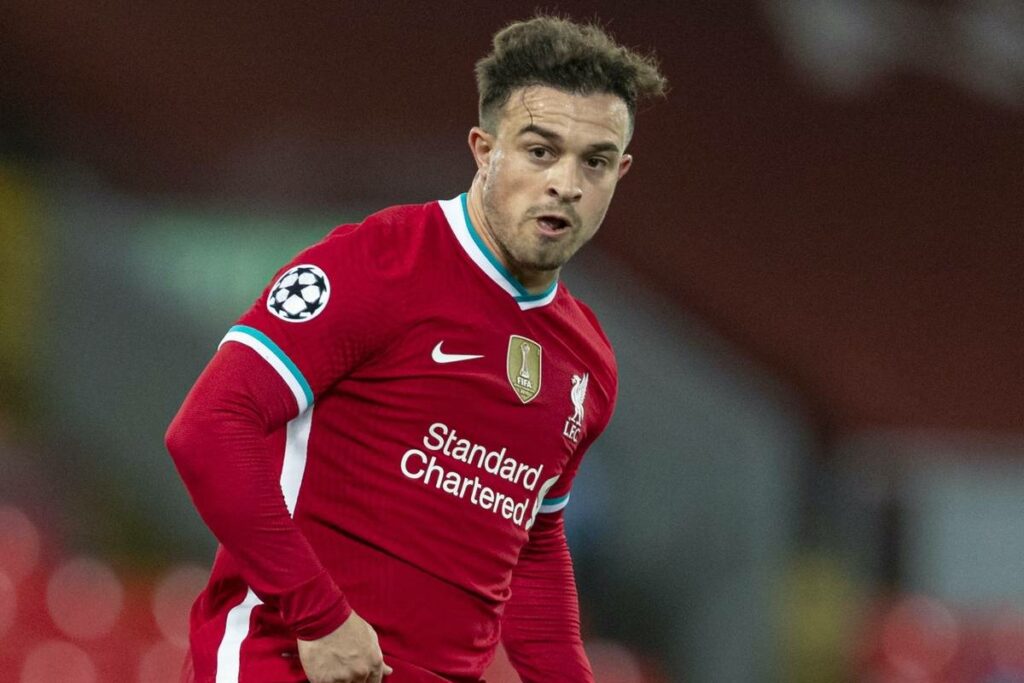 Liverpool has agreed to sell Switzerland playmaker Xherdan Shaqiri to Lyon for £9.5m. Lyon said the player was arriving in the city on Sunday before taking a medical on Monday, when “the finalization of the last administrative formalities” would also take place.

The 29-year-old, who joined the Reds from Stoke in a £13m deal in 2018, started just five Premier League games under Jurgen Klopp last season and looked set for a summer move away from Anfield as he continued to play understudy to a star-studded Liverpool attack with the likes of Salah, Mane, and Jota.

During his time at Liverpool, the winger made a total of 63 appearances and netted 8 goals for the Reds. Although he never truly broke into the first team, he was popular amongst the fans and was a reliable backup player. Despite never personally shining on the pitch, Shaqiri did join Liverpool in their most successful span within the last decade as he picked up Premier League, Champions League, Super Cup, and Club World Cup Medals during his 4-year span at the Club.

Shaqiri has enjoyed a remarkable career so far and could easily continue to play for at least the next 5 or 6 years. Shaqiri started his career at hometown club SV Augst, and at the age of eight, he was scouted by FC Basel. Whilst playing for Basel’s youth team, he competed in the Under-15 Nike Cup 2007 and was named the best player of the tournament. Despite having several other clubs attempting to sign him, he decided to stay with Basel, where he played for their reserve team from 2007 to 2009 in the Swiss 1. Liga. Two years later, Shaqiri signed his first professional contract with Basel on 2 January 2009.

Over the next 3 seasons, Shaqiri won the Swiss Super League 3 times and the Swiss Cup twice. This remarkable success resulted in heavy interest amongst Europe’s elite. Then in 2012, Bundesliga giants Bayern Munich bought the 20-year-old winger for €11.6 million and gave him a contract till 2016.

His time in Munich once again bolstered his trophy cabinet as he helped Bayern win a Champions League, 3x Bundesliga’s, 2x DFB Pokal’s, a Club World Cup, a UEFA Super Cup, and a German Super Cup. Although he did not play in the final, Shaqiri won the 2012–13 UEFA Champions League title with Bayern, as well as the Bundesliga and the DFB-Pokal title, making him one of the Bayern Munich players to have won the first treble in club history.

By June 2014, Shaqiri was reported to be the most decorated Swiss footballer of all time at just 22, with 13 medals to his name.

As playing time became harder to find in Munich, Shaqiri transferred to the Italian club Inter Milan on 9 January 2015 for €15 million, signing a four-and-a-half-year contract.

His time in Milan was incredibly short-lived as on 11 August, Shaqiri completed his move to Stoke for a club-record fee of £12 million on a five-year deal. Whilst at Stoke he became somewhat of a fan favourite and was regularly referred to as the club’s best player. He made 92 appearances for the potters and scored 15 goals and had 15 assists.

However, it only took a couple of years for Shaqiri to outgrow the club.  In March 2018, with Stoke battling against relegation, Shaqiri courted controversy with an interview for Swiss magazine Schweizer Illustrierte in which he said there was a “lack of quality” in his Stoke teammates and that even the presence of Ronaldinho would not improve the team. On 5 May, Shaqiri scored in a 1–2 defeat to Crystal Palace, as Stoke was relegated to the Championship.

As Stoke left the Premier League it was obvious to everyone that Shaqiri would not stay at the club as many top-tier clubs looked to secure his signature. Eventually, on 13 July 2018, Liverpool signed Shaqiri on a five-year deal after triggering his £13.5 million release clause. As previously mentioned, despite winning 4 medals with the Reds, Shaqiri did not put in the best performances. In the 81 appearances, he made for Liverpool he only scored 8 goals and provided 9 assists.

In addition to his club football Shaqiri has also been a key player for the Swiss National Team. Shaqiri made his debut at the age of 18 and has represented the Swiss at 2010, 2014, and 2018 World Cup as well as 2012, 2016, and 2020 European Championships. He has made 96 senior appearances for the Swiss and scored 26 goals making him the country’s 6th all-time Goal Scorer and 6th all-time Capped player. The winger was also named Swiss Footballer of the year in 2011 and 2012.

With the likes of Mohammed Salah and Sadio Mane already at the club, it was always clear that Shaqiri would never be a regular starter; however, with the arrival of Diogo Jota last season and his great performances, it was always likely that Shaqiri would leave. As Memphis Depay left Lyon for Barcelona in the summer, Shaqiri will be hoping that he can fill the massive void that the former captain has left and get his own career back on track.