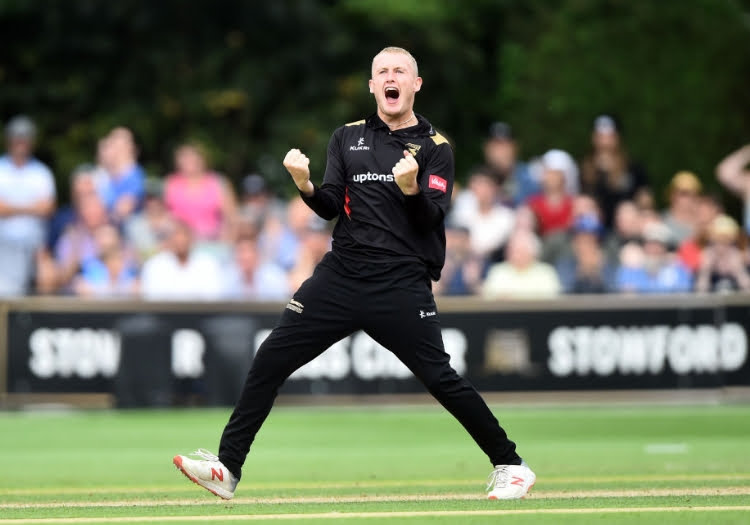 Callum Parkinson took 4 wickets for Leicestershire as they move up to third place in Division 3 of the County Championship after this week’s games.

The next games see the Blast Finals Day on Saturday as Hampshire Hawks face Somerset while Kent Spitfires play Sussex Sharks before the final later that day – the final round of Championship games take place between Tuesday and Friday next week.

Resuming on 50/3, the hosts lost Gary Ballance to the third ball of the morning as he was caught by Sam Hain off the bowling of Chris Woakes (pictured below) for 21 before Harry Brook would be caught by Tim Bresnan off the same bowler for 9. Dom Bess would be LBW to Bresnan for 4 before Harry Duke would be caught & bowled by Craig Miles for 8.

Resuming on 57/6, the hosts added 27 to their overnight score before Andrew Salter was LBW to Zafar Gohar for 19 with Ruaidhri Smith bowled by the same bowler for 4. Dan Douthwaite would be bowled by Ryan Higgins for 14 before Timm van der Gugten would be the final wicket to fall, caught by Graeme van Buuren off the bowling of Gohar, for the same score – Michael Hogan finished 9 not out.

Chasing 15 to win, the visitors would knock it off in 9 balls with Miles Hammond (4) and Chris Dent (11) the not out batsmen.

Adam Rossington would be caught by David Bedingham off the same bowler for 4 before Harry Gouldstone would be bowled by Rushworth for 2. Luke Procter would be LBW to Raine for 44 before James Sales was caught by Liam Trevaskis off the bowling of Potts for 53. Ben Sanderson would be the final wicket to fall, LBW to Borthwick, for 17 with Simon Kerrigan (28) and Jack White (3) the not out batsmen when the teams shook hands.

Resuming on 107/7, the hosts added 35 to their overnight score before James Taylor would be caught by Paul Walter off the bowling of Shane Snater for 19 before Hashim Amla (pictured below) would be LBW to Simon Harmer for 84. Dan Moriarty would be the final wicket to fall, caught behind by Adam Wheater off the bowling of Jamie Porter, for 8 – Reece Topley was 0 not out.

Following on, they would lose Ryan Patel as he was caught by Dan Lawrence off the bowling of Harmer for 17 before Cameron Steel was the other wicket to fall, bowled by Snater for 28, with Amla and Ollie Pope finishing 34 and 27 not out respectively.

Resuming on 147/1, the visitors would move the score to 200 before losing Jordan Cox as he was caught behind by Brooke Guest off the bowling of Matt Critchley for 81 with Daniel Bell-Drummond (51) and Jack Leaning (4) not out when the Kent declaration came.

Resuming on 291/2, the hosts would move to 356 before Lewis Hill would be caught by a sub fielder off the bowling of Henry Crocombe for 145 before opener Hassan Azad would be dismissed by the same combination for 152. Louis Kimber (59 off 52 balls) and Harry Swindells (69 off 64 balls) putting on 130 in 18.5 overs as Leicestershire would declare – 201 scored off 30 overs in the morning session.

Tom Hinley would be bowled by Parkinson for 1 before Oliver Carter was caught by Evans off the bowling of Mike for 9. Crocombe would be LBW to Mike the following ball for a golden duck before Jack Carson was LBW to Parkinson for 2. Joe Sarro would be the final wicket to fall, caught by Swindells off Parkinson’s bowling for 1 with Sean Hunt finishing 1 not out – Leicestershire winning by an innings and 5 runs.

Resuming on 233/6, the hosts would add 6 to their overnight score before losing John Simpson who was caught by Jack Haynes off the bowling of Joe Leach for 59 with Toby Roland-Jones LBW to Charlie Morris for 1 in the following over. Luke Hollman would be caught behind by Ben Cox off the same bowler for 46 later in the same over before Tim Murtagh would be the final man out, caught by Brett D’Oliviera off the bowling of Morris (the seamer finishing with 6/52) without scoring – Ethan Bamber (pictured below) would be 7 not out.

Ed Barnard would be caught by Simpson off the bowling of Martin Andersson for 28 before Cox would be LBW to the same bowler for 4. Leach would be bowled by Bamber for 11 before Josh Baker would be dismissed the same way for 2. The final two wickets would both fall for 1, firstly Morris would be bowled by Andersson then Dillon Pennington would be caught by Simpson off Bamber’s bowling – Gareth Roderick would finish 42 not out.