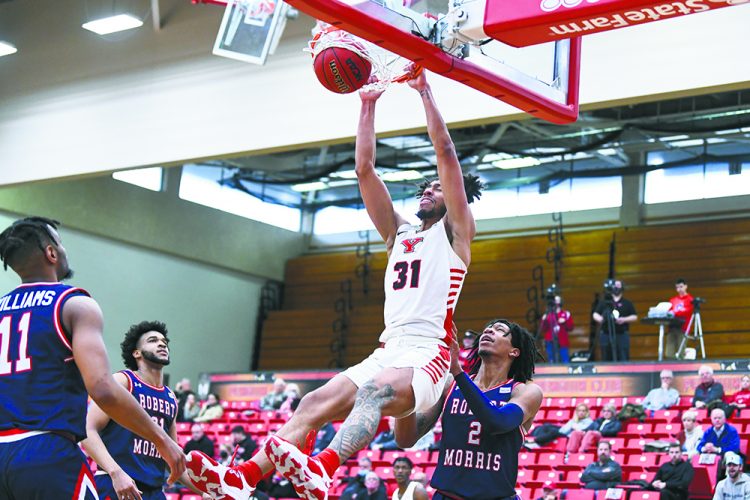 It’s going to be a short turnaround for Youngstown State.

After getting swept in its final road trip of the season at Wright State and Northern Kentucky, YSU dropped to seventh in the Horizon League standings, and as such will be hosting a first-round contest against 10-seed Robert Morris at 7 p.m. tonight at the Beeghly Center (ESPN+, 1390 AM WNIO).

“It’s tournament time. The only thing that matters is how you play for that 40 minutes,” YSU coach Jerrod Calhoun said.

That Colonial win snapped a six-game win streak for YSU, which lost three of its final five games to end the regular season. The Colonials are on a four-game losing streak, including a loss to lowly IUPUI, which played most of its season with just six players and defeated just one Division I team in that span — RMU.

“If not the best athlete, he’s one of the best athletes in our league,” Calhoun said of Spear. “He’s really developed his game. He can drive from the mid-post, he can put you on the block. He’s a capable 3-point shooter. The thing that I really like about his game is his motor never stops on both sides of the ball. He plays extremely hard.”

Behind Spear, Michael Green III is averaging 10.6 points and leads RMU with 92 assists, about three per game.

Calhoun said Green is one of the best pick-and-roll point guards in the Horizon League, and added, “They have great inside guys, and they have guys that can make shots. We’ve got to play a sound basketball game. There’s not one thing you can pinpoint; you have to play well on both sides.”

5 Oakland handles No. 12 IUPUI and No. 6 Detroit Mercy advances past No. 11 Green Bay. The result of the 8/9 game between UIC and Milwaukee will have little effect on YSU’s path, as both are seeded behind the Penguins.

“It’s all about mindset. That’s what sports are about — which team can have a really good mindset, a collectiveness of where they’re trying to go, what they’re trying to accomplish,” Calhoun said. “This group (YSU) has had that throughout the season, so we’ve just got to come out and play good basketball.”