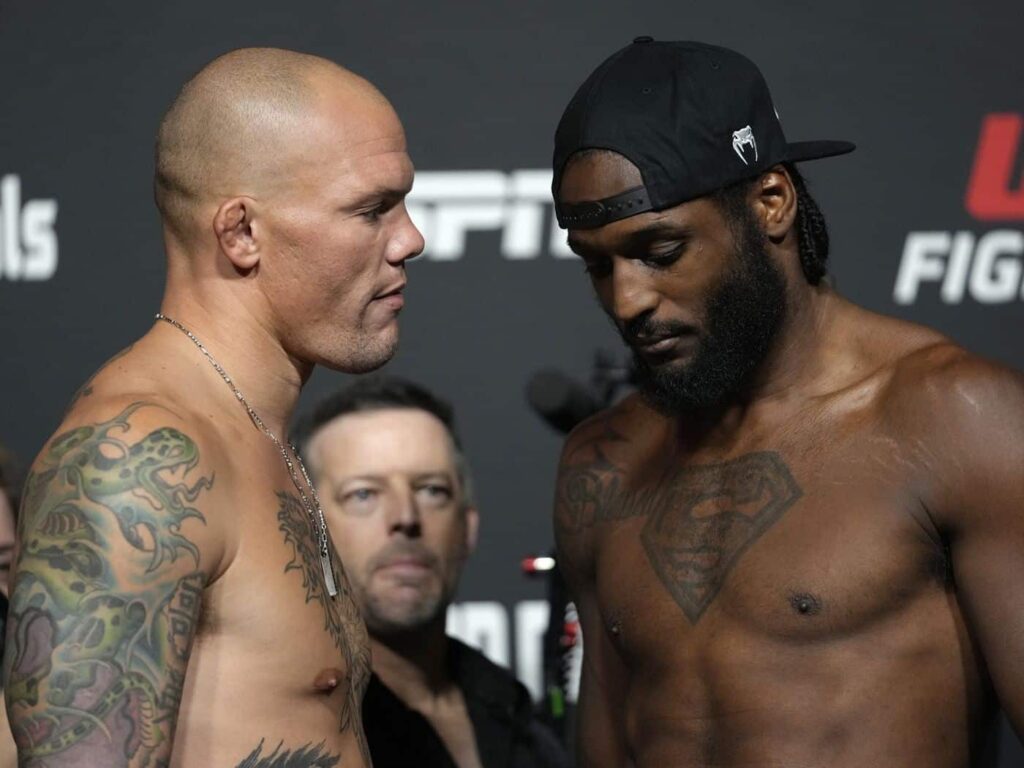 When two fighters take the competitive fire that is needed to step inside the octagon and turn it into personal dislike for their opponent, the results can be explosive. Even when the prefight press conference and weigh in is cordial, both athletes understand that they are in the “hurt business.” No matter how friendly the handshakes are, both men have signed a contract to inflict physical pain on the other, in the hopes that the other fighter will be knocked out or forced into submission before the scheduled rounds are complete.

Anthony Smith felt disrespected by Ryan Spann. Smith is known around MMA circles to be a cordial guy who doesn’t bad-mouth his opponents. Spann, on the other hand, is known to be very dismissive of his opponents, refusing to shake hands with them or even make eye contact. It is a sign of disrespect. Anthony Smith used it as fuel to light a fire under him. It paid off.

Smith hurt Spann badly with strikes early in the first round of their matchup. Spann’s legs were so wobbly that he could barely stand up. In one instance he missed a punch and the momentum of his own motion almost took him to the mat. At that point it was hard to imagine that he’d survive the first round. Anthony Smith smelled blood in the water and proceeded to attack like a shark. He pounced on Ryan Spann and was able to establish both arms securely under his opponent’s neck. It was too much for Spann who was forced to tap out. Anthony Smith had successfully taken the disrespect he felt from his opponent and channeled it into a dominant performance. Young athletes should take notes; the best way to earn the respect of your opponents is to outperform them.

Fighters that dislike one another seemed to be the ongoing theme of this fight card. Leading up to the fight, Ion Cutelaba and Devin Clark exchanged some not-so-friendly words and it was clear they weren’t just turning it on for the cameras. Devin Clark even went so far as to say that this fight would be the first time he’s climbed into the octagon with a man he genuinely dislikes.

Ion Cutelaba has a reputation in MMA circles for being a “wild man.” He’s known to start fights at the highest level of intensity, putting immense pressure on his opponent from the opening bell. However, his conditioning has come into question; he’s rarely been able to win a fight that has gone the distance. After the first round, there is normally a steady decline in Cutelaba’s activity and effectiveness. On this night, however, Devin Clark was not able to exploit his opponent’s well-known weakness.

Cutelaba upheld his reputation of being a very active fighter in the first round. A mean overhand right gave him the momentum early on. Clark spent the majority of the first round responding to the referee’s commands to fight back in order to prevent a stoppage. Meanwhile, Cutelaba showed that he could do more than strike; when the fight went to the mat, he dominated his opponent there as well.

Rounds two and three were more of the same. It looked as if Clark never fully recovered from the onslaught he received in round one. The most surprising aspect of the fight is that Clark was able to go the distance. It looked as if he would be forced into submission at any moment. There is no such thing as a moral victory, but Clark showed a lot of heart to survive a fight during which his bottom row of teeth were severely damaged. It was a great victory for Cutelaba who showed that his increased conditioning has paid off. Unlike other performances, he did not appear tired in rounds two and three.

Ariane Lipski was completely dominant in this fight. She was able to knock Mandy Böhm down to the mat with a strike in all three rounds. She was also able to score a takedown in every round. The most surprising aspect of the entire fight is that Böhm was able to go the distance. It was a disappointing UFC debut for Böhm, who has become a fan favorite in Germany. For Ariane Lipski, it was a great performance, the likes of which only goes to strengthen her claim that she should be given a chance to fight for the women’s UFC Flyweight championship.

At the beginning of round one, Arman Tsarukyan attempted to take Christos Giagos to the mat. Giagos was able to use veteran moves to counter the maneuver and stay on his feet. That would be the only highlight of the fight for Giagos. Tsarukyan responded to his failed takedown attempt with a right hand strike that sent his opponent to the mat. Seizing his opportunity to end the fight early, Tsarukyan pummeled Giagos with a ground and pound attack that rendered him defenseless. The referee was forced to stop the fight. It was an emphatic victory for Tsarukyan, who should receive a boost in the rankings when they are released later this week.

The majority of round one was fairly even. Neither man was overly aggressive and there was no clear advantage either way. That changed near the end of the round when Tony Gravely landed a huge overhand right. Nathan Maness was saved by the bell. Had there been more time left, Gravely surely would have been able to finish him off.

In round two, Nathan Maness pulled off an improbable comeback. After landing a huge right uppercut early in the round, Maness mounted Gravely’s back and began showering him with punches to the face. The referee stepped in to stop the fight. It was a dramatic turnaround that served as a reminder that things can change in the blink of an eye during a mixed martial arts contest. No opponent should ever feel so comfortable as to forget that.

Leading up to the fight, the chatter surrounding Antonio Arroyo was that he was being given one last shot to prove he belonged in the UFC. On September 18th, he did not help his case. In losing to Joaquin Buckley via TKO in the third round, he seemed to show that his reputation as a man who’s only halfway interested in being a professional athlete may very well be true. In professional sports, only the most dedicated athletes are able to achieve longevity or greatness. Even those with immense natural talent have to work hard to stay relevant. Arroyo does not appear to be cut from that cloth. UFC fans most likely won’t get to watch him enter the octagon again. For Joaquin Buckley, this a nice comeback win after losing by knockout in January. It will be interesting to see if he can regain his status as one of the best prospects in the middleweight division.

Young athletes should learn a valuable lesson from watching Anthony Smith and Ryan Spann; never disrespect your opponent. Anthony Smith is known in MMA circles as a nice guy, however, he took exception to being disrespected by his opponent and channeled that anger into a first round submission. Even as an adult, sportsmanship is essential. Ryan Spann just learned that lesson the hard way.

UFC returns next week with a pay-per-view event at T-Mobile arena in Las Vegas, when Alexander Volkanovski takes on Brian Ortega for the UFC featherweight championship. Outside of the main event, the rest of the card has some very recognizable fighters such as Nick Diaz, Robbie Lawler and Jairzhino Rozenstruik. It should be an entertaining evening for fight fans who want to see a lineup of good fights, capped off with a championship bout. As always, we’ll have all the latest updates on the outcomes, as well as in depth analysis, right here at World In Sport!