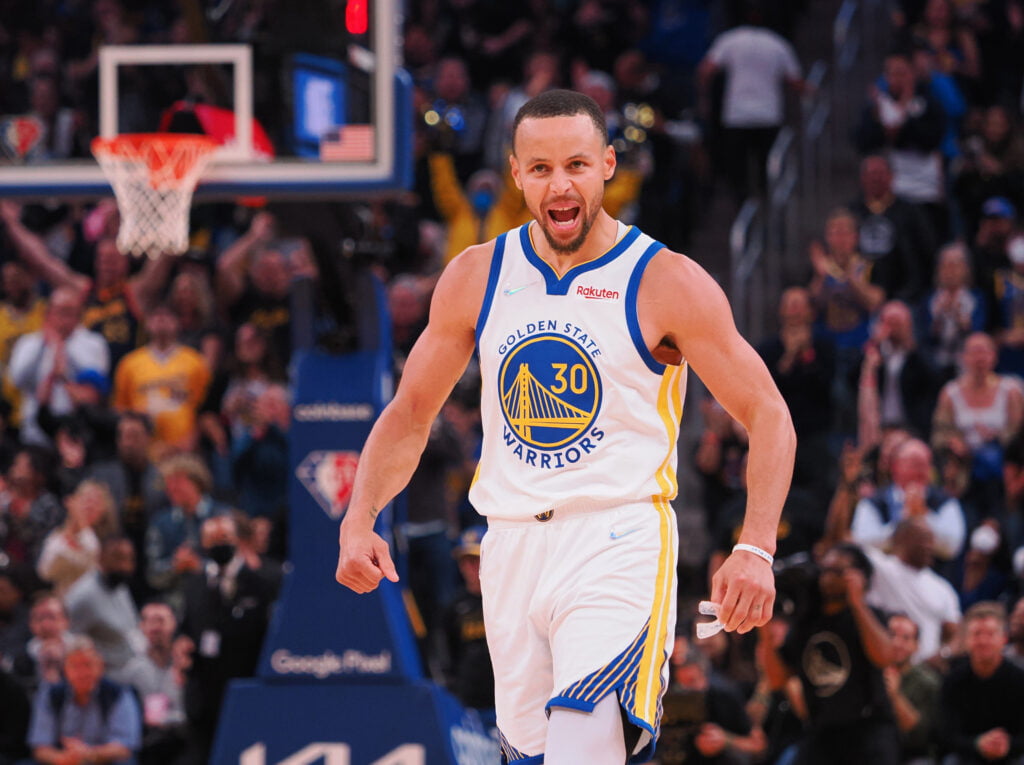 Apr 18, 2022; San Francisco, California, USA; Golden State Warriors guard Stephen Curry (30) celebrates as a time out is called against the Denver Nuggets during the second quarter of game two of the first round for the 2022 NBA playoffs at Chase Center. Mandatory Credit: Kelley L Cox-USA TODAY Sports

The Golden State Warriors took Game 1 of the Western Conference Finals with a 112-87 victory over the Dallas Mavericks on Wednesday, May 19. The team had a chance to extend their series lead to 2-0 at the Chase Center before heading over to Dallas with a Game 2 win.

While things were much closer than in the first contest, the Warriors pulled way to take a 126-117 victory in front of their home fans. It is a game that the Mavericks will kick themselves over, because they had a chance to win.

Here are three highlights that stand out for Game 2.

3. Luka Doncic’s three-pointer to end the first half

Mavericks star Luka Doncic had himself a hell of a first half, as he dropped 24 points against the Warriors. He made the ultimate statement to end the second quarter, as he hit a shot from deep near the half court logo at Chase Center to extend Dallas’ lead to 72-58.

Luke from DEEP before the half

Told the crowd to calm down 😳 pic.twitter.com/S5I56lP8iQ

After hitting the shot, Doncic looked towards the fans and motioned for them to calm down.

Perhaps the most talked about portion of the game was the incident between Davis Bertans and Damion Lee. Midway through the second quarter, Bertans hit a corner three-pointer to give the Mavericks a 47-34 lead. Afterwards, Bertans was on the floor and as he was getting up, Lee was trying to leap over him, resulting in him spilling onto the court.

Things getting chippy after the Bertans triple 👀 pic.twitter.com/ggaKb6QWpu

Somehow, referees decided to assess double technical fouls to both Bertans and Lee.

With less than a minute remaining in regulation, the Warriors held a 119-115 lead. When in doubt, get the ball in Steph Curry’s hands. Sure enough, he stood behind the three point line, and hit nothing but net when letting go of his shot.

After making the shot, Curry made the motion that he had officially put the Mavs to sleep.

Curry finished the night with 32 points while shooting 11-of-21 from the field and 6-of-10 from the three-point line.

The series now head to Dallas, where the Maverick will look to get back in this series. Game 3 takes place on Sunday, May 22 at 9:00 p.m. ET.