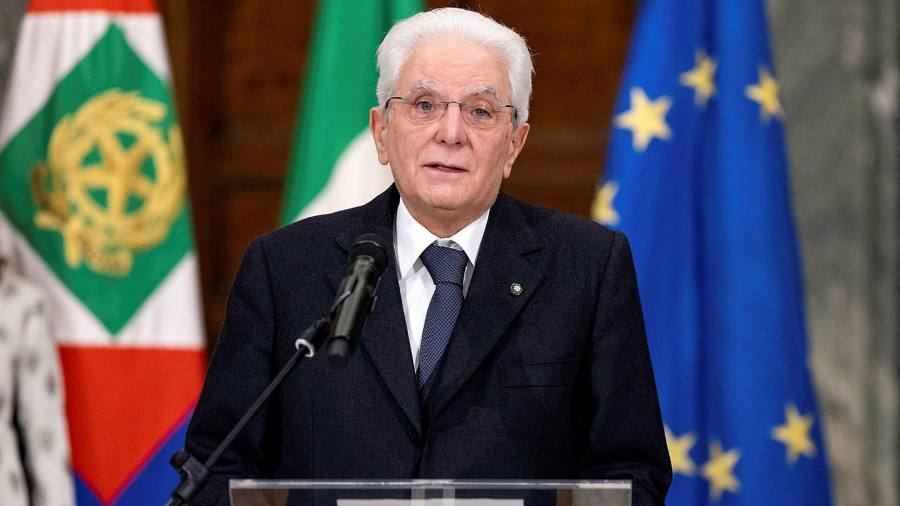 The process by which they re-elected Sergio Mattarella as president of Italy exposed a political class deeply at odds with itself, yet with a common selfish interest in its own survival. Mattarella’s re-election averts a short-term disaster — the collapse of Prime Minister Mario Draghi’s reformist government. But it leaves grave doubts over whether Italy’s professional politicians, manoeuvring for advantage ahead of next year’s parliamentary elections, are capable of summoning a higher sense of responsibility for the country as it stands at a critical juncture in its development.

The First Republic is the informal term used to describe the political system that governed Italy from the aftermath of the second world war until the early 1990s, when it collapsed in a storm of bribery and other scandals. The Second Republic, which has staggered from crisis to crisis over the past 30 years, was supposed to represent a fresh start for politics.

The events of the past week demonstrate, on the contrary, the woeful shortcomings of the Second Republic’s political parties — whether relatively old, like the hard-right League, or relatively new, like the once anti-establishment Five Star Movement. Increasingly, Italian democracy has come to rely for leadership and stability on the talents and maturity of non-political figures, such as Draghi, who are brought in to steady the ship because the elected politicians cannot do it themselves.

Italy’s EU partners and financial markets will be relieved that, for the next 12 months or so, Draghi will be in a position to consolidate the reforms he has pursued since becoming prime minister a year ago. These reforms, drawing on the roughly €200bn available to Italy from the EU’s €750bn pandemic recovery fund, are a once-in-a-generation opportunity to boost growth, jobs and innovation in an economy that has languished in stagnation and high public debt since the 1990s.

It may even turn out that Mattarella will serve only part of his second seven-year term, allowing Draghi a chance to move to the presidency and continue overseeing the reforms. However, such an outcome is far from guaranteed and would still leave open the question of how far any government formed after next year’s elections will have a sincere commitment to reform.

It was remarkable to see the politicians applauding themselves on Saturday as, in the eighth round of voting in a week, they finally united behind Mattarella. For the earlier deadlock underscored the essential disunity of Draghi’s “national unity” government. Not for nothing did Enrico Letta, leader of the centre-left Democratic party, lament that the presidential election revealed “a political system that is blocked” and that “isn’t working”.

Like Giorgio Napolitano, who agreed in 2013 to serve a second term as president only with the deepest reluctance, Mattarella did not seek re-election. But the political parties could find nobody in their own ranks with either the national stature or the cross-party appeal to replace Mattarella.

In the end, they settled on a second term for the 80-year-old president only because they feared any other step might trigger the fall of Draghi’s government and early elections. For many of them, this carried the risk of fewer parliamentary seats and the loss of power, privileges and pensions.

Amid these self-interested calculations, one party is charting a distinctive path — the far-right Brothers of Italy, led by Giorgia Meloni. It is the only major party that refused to join Draghi’s government, and opinion polls show that it is at present the most popular party on the rightwing side of the political spectrum. Italy may be scarcely a year away from deciding whether to install its first radical right prime minister of the postwar era.