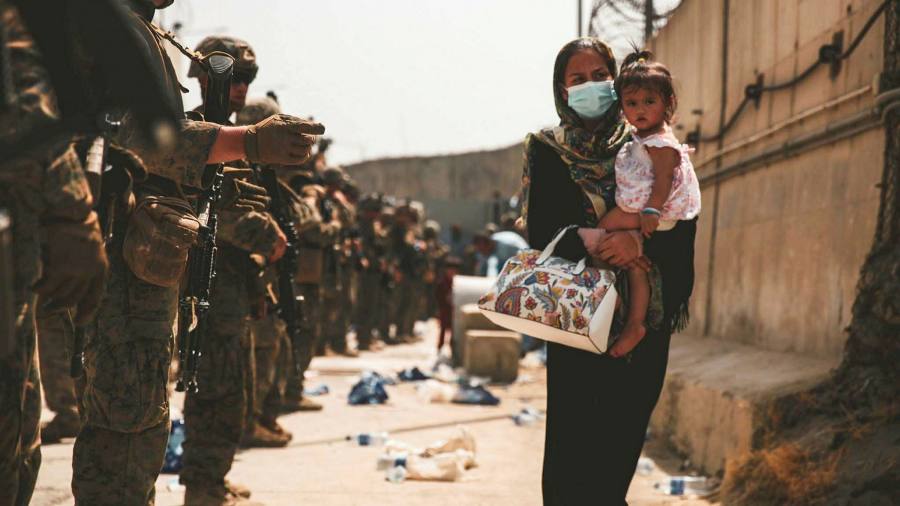 Since the second world war, some of the strongest advocates for the use of US power abroad have been Democratic presidents.

From Harry Truman to Bill Clinton, so-called liberal internationalists have sent US forces to Korea, Vietnam and the Balkans with orders to protect democracy and human rights against the threat of communism and nationalism.

The wars in Iraq and Afghanistan changed that. Both Barack Obama and Joe Biden won office with a promise to end the “forever wars” that followed the 9/11 attacks in 2001. It was a vow that propelled Biden into the fateful decision to withdraw US forces from Afghanistan.

But the chaos that has followed presents a challenge to the anti-interventionist position of the progressives who are increasingly influential in the Democratic party, according to insiders and analysts.

“Plenty [of Democrats] see utility for the use of force, depending on the situation,” said a former senior Obama administration official.

Tom Malinowski, a Democratic congressman who describes himself as a liberal internationalist who has “a greater comfort level with exercising power” than some in the party, said the debate among Democrats over interventionist missions was unresolved.

He said the consequences of the Afghanistan withdrawal should “lead us to question what has become an almost reflexive argument on the left, that every American military commitment around the world is doing nothing good”.

“Sometimes America has done more harm than good, but we are still the only force in the world that people in great danger look to in their moments of need. And that is something that American progressives need to understand.”

Richard Fontaine, chief executive of the Center for a New American Security, a bipartisan think-tank that supports a strong national security posture, said what happens next in Afghanistan would have a big impact on the debate over military interventions.

“Now that America’s participation in [Afghanistan] is ending on such a negative note, there may well be a rethinking of the balance between US action and non-intervention,” he said. “If Afghanistan becomes a sanctuary for terrorists with global reach . . . then I think the likeliest outcome is we go back in, just like we did with Iraq.”

In 2014, three years after the US withdrawal from Iraq, Obama dismissed the Islamist group Isis as a “junior varsity team” that posed a minimal threat, only to be confronted with what Fontaine described as the biggest terrorist sanctuary in history. Obama sent troops back within months.

Until the wars in Iraq and Afghanistan that followed 9/11, there was strong bipartisan support for military interventions in the Gulf, Panama and Balkans. It was based on the creed that the US military was an effective instrument of national policy. Back then, regret among liberals rested on failures to intervene, such as in the 1994 Rwanda genocide.

Today, Democratic hawks who favour employing the military in support of US strategic interests clash with a new crop of leftwing progressives led by Bernie Sanders. These Democrats endorse human rights but stand against “the forces of militarism”.

Both flanks of the party have criticised Biden’s botched handling of the Afghanistan withdrawal. There was now “a huge debate” among Democrats over the militarisation of US foreign policy, said Ro Khanna, a prominent progressive congressman who supported withdrawal but described the drawdown as marred by “hubris”.

The US still has more than 150,000 troops deployed overseas, including 2,500 in Iraq, 900 in Syria and tens of thousands in allied bases elsewhere in the Middle East, Japan, South Korea, Germany and beyond. Washington’s defence budget is bigger than that of the next 10 countries combined. Still, Biden put in a defence budget request for $715bn, an $11bn rise on last year.

“That is more than Ronald Reagan proposed in inflation-adjusted dollars at the height of the cold war,” said Khanna. Despite continuing Democratic support in some quarters for robust military engagement overseas, Khanna believes that “the endless wars have probably seen the end of their days in the Democratic party for the foreseeable future”.

Biden ended US support for the Saudi-led coalition fighting the Yemen war as his first foreign policy move. His secretary of state Antony Blinken — once a backer of using force in Syria — publicly disavowed regime-change policies and “costly military interventions” in pursuit of democracy promotion a few weeks into office.

Progressives increasingly have public opinion on their side. Most Americans supported Biden’s decision to withdraw from Afghanistan, while dwindling numbers of Democrats support the idea of American exceptionalism. Yet since the fall of Kabul, approval ratings for the president have dipped to their lowest point.

Heather Hurlburt, a former speech writer to president Bill Clinton now at the New America think-tank, said Americans do not tend to vote on national security issues, but do vote according to “perceptions of strength and leadership”.

Biden is seen as a moderate, traditional realist who straddles extremes in his party, which observers liken to a big tent so swollen it is stretching at the seams on domestic and foreign policy.

Tom Wright, foreign policy expert at the Brookings Institution, said the US experience in Afghanistan might “stiffen resolve” in the Biden administration to demonstrate its commitment to US allies and stay focused on the threat from China.

Bill Kristol, a self-described neoconservative who sees overlap between his position and liberal internationalists in the Democratic party, argued Biden would now owe his party’s hawks “compensation” over the Afghan withdrawal, adding he expected policy on Russia and China to toughen.

“It will be very interesting to watch in Congress on everything from the defence budget to other international commitments,” he said.

The administration is already pushing back on assertions from Chinese state media that US mistreatment of Afghanistan signalled Washington would also abandon Taiwan were it ever attacked.

On Wednesday, Biden told ABC: “We made a sacred commitment . . . that if in fact anyone were to invade or take action against our Nato allies, we would respond. Same with Japan, same with South Korea, same with Taiwan.”

Prospects for military interventions in support of the democratic ideals Biden has said he wants at the core of his foreign policy remain low, however.

The administration has addressed human rights crises in Belarus, Ethiopia and Myanmar with censure and sanctions, swerving calls from activists to depose oppressive leaders by force.

Trita Parsi, co-founder of a new think-tank that opposes militarism in US foreign policy, said Biden’s position on Afghanistan would make it difficult for any Democrat to propose new interventions.

“You can’t protect human rights through the barrel of the gun,” he said. “Do we need another decade in Afghanistan to see that clearly?”