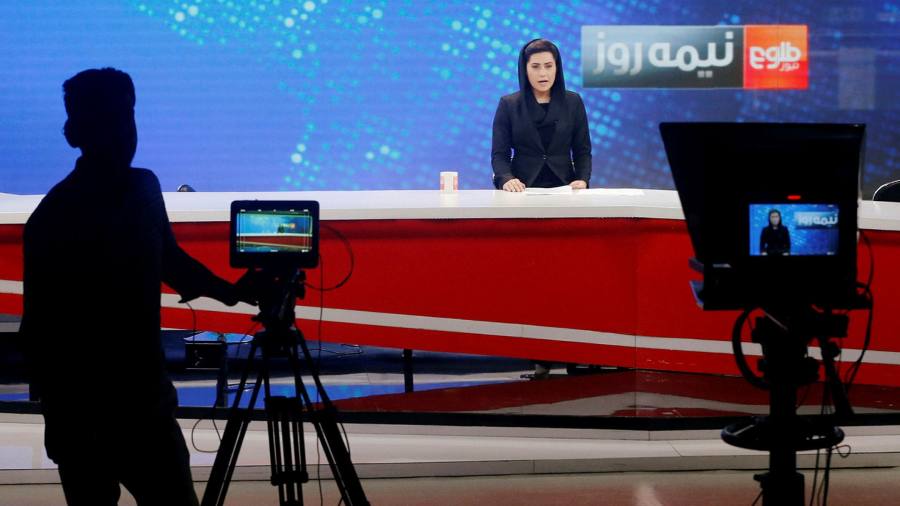 Sign up to myFT Daily Digest to be the first to know about Taliban news.

Madina Morwat was among scores of Afghan journalists who lost their jobs when dozens of television and radio stations suspended programming after the Taliban captured Kabul last month.

But the 23-year old reporter quickly resumed her career after taking a job at Tolo News, part of Afghanistan’s largest media company Moby Group and a channel that has come to symbolise the rise of liberal media in Afghanistan since the Taliban were first ousted from power following the US-led invasion in 2001. “Many embassies asked if I wanted to leave Afghanistan, but I am committed to work for women and my country,” she said.

Since the hardline Islamist group swept back into the Afghan capital in August, Tolo News has continued to broadcast a full schedule. The country’s first 24/7 channel is known for hard-hitting coverage. It broke the news that deposed president Ashraf Ghani had fled as the Taliban swept across the country and has reported on corruption in the military. It also employs dozens of female journalists. Its fate under the Taliban is being widely seen as a litmus test of whether the new regime will guarantee basic freedoms.

During the Taliban’s previous tenure from 1996-2001, women were banished from public life, the media was strictly controlled and television and other forms of entertainment were banned.

In need of international recognition to access aid, the Taliban have an interest in presenting a more liberal face to Western powers. In turn, foreign governments are hoping the regime will be one they can work with in order to avert an economic crisis that could unleash a flood of refugees and a proliferation of jihadis in the region.

But so far, the outlook seems precarious. Despite an early promise from senior Taliban figures that Afghans had nothing to fear and that the hardline Islamists had no intention of returning to the repression of the past, Kabul has seen a crackdown on dissent. Armed fighters have aggressively disbursed protesters and last week beat and detained journalists — including a Tolo News cameraman — who were reporting on anti-government protests in the capital.

“They may eventually kick us out . . . I half expect that,” said Saad Mohseni, chair and chief executive of Moby Group, who launched Tolo News in 2004.

But Mohseni said this was the moment to talk to the Taliban and convince them of the merits of a moderate Afghanistan before their views hardened. “Engaging them is probably the right thing to do right now,” he said. Mohseni, a 55-year-old Afghan Australian and son of an Afghan diplomat, was born in London and left a career in finance at Australian stockbroker Tricom to return to Afghanistan and start his media business. Moby Group was launched in 2003 with support from a USAID grant. Media tycoon Rupert Murdoch, who Mohseni describes as a friend, took a minority stake in the company in 2012.

Tolo’s rise heralded the modernisation of Afghanistan’s media landscape following the US-led invasion, with the country boasting dozens of television channels and 150 radio stations before the Taliban regained control.

As the country’s leading broadcaster, with programming in Pashto and Dari, two of the country’s main languages, Tolo and the other Moby television and radio channels command a 60 per cent share of the Afghanistan audience. Reality show “Afghan Star” and Tolo’s evening news programme regularly attract some 12m viewers, a third of the country’s population. Its channels are also available in countries across the wider region.

Tolo immediately put the new regime to the test when it asked Taliban official Mawlawi Abdulhaq Hemand to do an interview with female news anchor Beheshta Arghand two days after the Islamists seized power. Their exchange went viral across the world.

Arghand subsequently interviewed human rights activist Malala Yousafzai, a vociferous critic of the Islamist faction’s repression of women who was shot as a schoolgirl by the Pakistan Taliban — which has declared allegiance to the Afghan Taliban.

But Arghand and more than 50 others among Tolo’s 400 staff have since fled the country, fearing for their safety and that of their families.

Terrified that the Taliban would target their homes, “we mostly spent our nights in the office” after the takeover, said a Tolo journalist who left the country at the end of August, “The Taliban are not doing what they are saying. We have to save our lives and our families.” Mohseni, who was speaking from Dubai, said he would not return to Afghanistan until his safety was assured. The Taliban had pledged Tolo could continue its programming, he said, but out of caution he has already pulled some Turkish soap operas and music videos off the air.

Observers say the early days of the new regime raised false hopes for the future of free media.

“The top Taliban leadership are viewing Tolo as a potential tool that they can exploit to curate their image to their own liking in the months to come,” said Avinash Paliwal at the Soas South Asia Institute at the University of London. “Given Tolo’s powerful international voice, the Taliban is granting it privileges to help soften their image. Those privileges could change.”

Although it is unclear for how much longer Tolo will be able to stay live, Mohseni has used social media to denounce the flogging of reporters and to pay tribute to a journalist working with the National Resistance Front of Afghanistan who was killed in fighting against the Taliban in the Panjshir Valley, the country’s last opposition holdout.

Tolo would continue operating out of Kabul for as long as possible, he said, adding: “There are a lot of other people who want to stay on and work, and we’ve employed a lot of new people,” including many women.

But if security or independent coverage became compromised, operations would be relocated. “We have no safety nets, there’s no state, government, no official police,” he said. “It’s actually nerve-racking for us.”