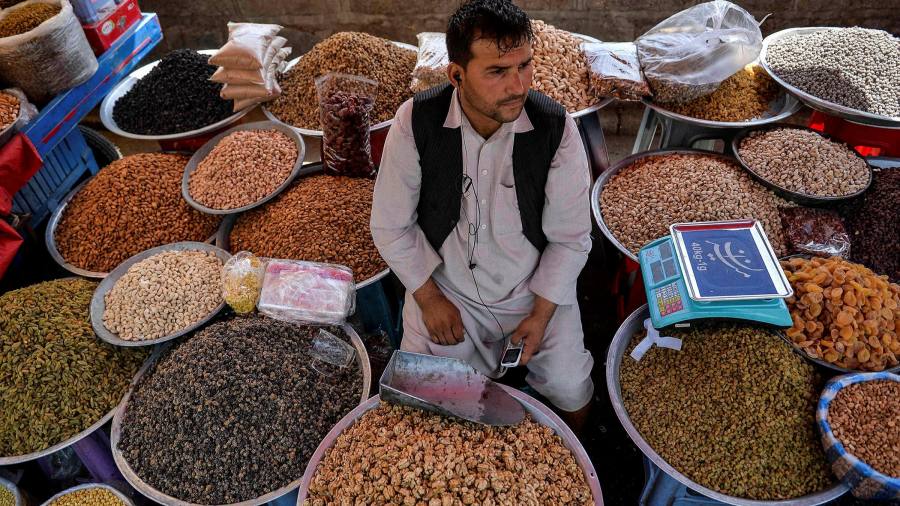 Prices of everyday essentials such as flour, cooking oil and fuel have surged. Salaries have stopped being paid. Residents in pursuit of cash queue outside banks and at automated teller machines.

Since the Taliban took power earlier this month, Afghans have struggled through an economic meltdown, which analysts and aid groups say could spiral into financial collapse and widespread hunger.

The landlocked, import-dependent nation is cut off from the world: its borders are mostly closed and its new Islamist rulers are unable to access about $9bn in frozen foreign currency reserves.

Donor countries including the US and groups such as the IMF and World Bank have stopped funding to Afghanistan, where foreign aid accounts for more than 40 per cent of gross domestic product. The afghani, the country’s currency, has dropped about 10 per cent, as physical shipments of US dollars that supported its value ground to a halt.

In Kabul there are signs frustration is rising: protesters, including some government employees, took to the streets on Saturday to demand banks reopen and that they be paid salaries that are months overdue in some cases.

Anwita Basu, head of Asia country risk at Fitch Solutions, warned that Afghanistan’s gross domestic product could contract between 10 per cent and 20 per cent in the next two years.

That “is roughly the scale of contraction experienced by economies that have faced similar political collapse such as Syria, Lebanon and Myanmar”, she said, adding that hyperinflation “cannot be ruled out” if the currency continues to weaken.

Afghans are already witnessing alarming price increases, with the prospect of shortages in the coming months. The pressure adds a severe drought that is expected to curb supply of vital crops such as wheat.

The UN World Food Programme said 14m Afghans, or a third of the population, were already facing hunger, and that it was “difficult now to see the future for this population . . . without malnourished children”.

In Herat, Afghanistan’s third-largest city, residents said shops and markets were stocking fewer varieties of goods, with volumes lower and prices higher. Many fear the crisis will worsen when the country’s cold winter sets in.

One resident said the price of lentils, for example, had more than doubled from 50 afghanis per kg to 120 ($1.50), with chickpeas and beans also higher. “The big businessmen have left Herat, which makes us wonder how the trade is going to continue,” she said.

Another person in Bamyan, a smaller city in central Afghanistan said the cost of vegetable oil had risen about 25 per cent to 2,000 afghanis a gallon in the space of a week.

Banks have mostly been closed since the Taliban took over two weeks ago, with the few that have reopened facing crowds of people desperate to drain their savings and secure much-needed cash.

The Taliban over the weekend limited bank withdrawals to the equivalent of $200 a week because of concerns about a cash shortage.

How Afghanistan’s economy fares in the coming months will depend on the direction of relations between the Taliban and other countries. Engagement with neighbours such as Pakistan and Iran, and even with the US and Europe, could help pave the way for cross-border land trade and the resumption of international aid.

The Islamists, who are yet to form a government, have held talks with non-Taliban leaders such as former president Hamid Karzai, raising the possibility of a more diversified administration with some economic expertise.

But many analysts say these wishes are fanciful. The recent decision to appoint Mohammad Idris, a Taliban veteran with no known economic training, as acting central bank governor suggested the new Islamist power would prioritise ideologues over experience.

The Taliban’s efforts to present a more moderate image than when it first ruled in the 1990s, when it ran a repressive regime that barred women from work, have also been contradicted by evidence of revenge killings and brutality.

Some in the west are weighing imposing sanctions on the country, something that ICG’s Smith argued “would hurt the people of Afghanistan” more than the Islamist leaders they are designed to punish.

Hundreds of thousands of Afghans now find their livelihoods in jeopardy, including civil servants who worked under the previous government and members of the armed forces.

The Taliban said it would continue paying government salaries, but many are sceptical. It is also unclear whether women will be allowed to continue working, with the UN warning that in some provinces they have been ordered to stay home.

“You don’t know if you should go to work or not and if you do whether you will be paid or not and if paid how much it will be,” said one woman who is a doctor at a state-run hospital in Herat. “Those who keep going to work are doing so based on their commitment to God and people.”

One resident of Kabul said he feared the country was headed towards “a humanitarian catastrophe”.

“Because of the power vacuum, there is no money in Kabul,” he said.