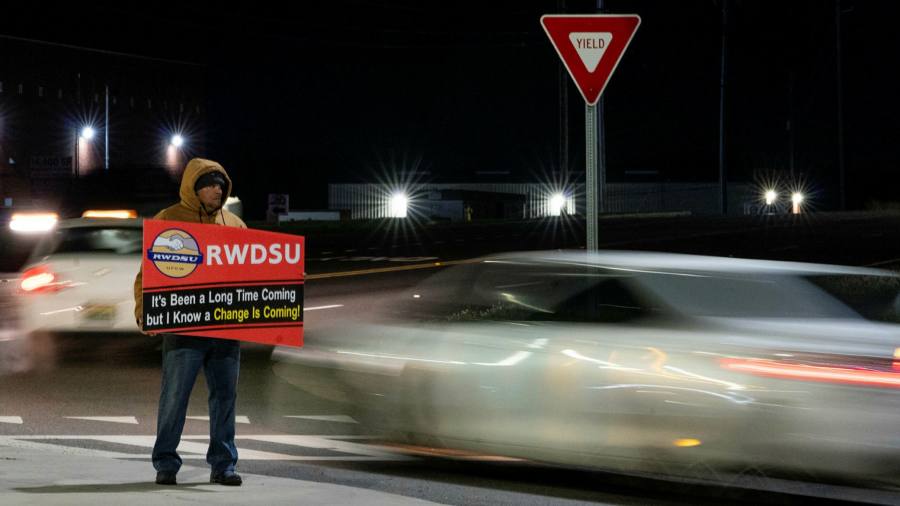 Sign up to myFT Daily Digest to be the first to know about Trade unions news.

The writer is executive director of American Compass

This Labor Day, American labour stands not at a crossroads but a dead end. Only 6 per cent of private sector workers in the US are union members, and a high-profile organising push at Amazon failed miserably.

The death last month of longtime AFL-CIO president Richard Trumka has rekindled the debate within the labour movement about its priorities. Should the focus be on organising more workers into unions or on political activism that might elect labour-aligned politicians in order to achieve through legislation what unions can no longer secure at the bargaining table?

A new survey of workers to be released on Monday by American Compass in partnership with YouGov demonstrates just how badly unions have missed their mark with their focus on partisan politics. Given a list of tasks that a labour organisation could perform, workers ranked politics and social activism last and second to last in importance, giving them together about a tenth of the weight they gave to collective bargaining, benefits and training, and workplace collaboration. Among those who would vote against a union in their own workplace, union involvement in politics was the top concern.

One striking consequence of this gap between what workers want and what unions do is that the working class, who should in theory be the target of the labour movement’s efforts, are in practice mostly alienated from it. It is middle and upper-class Democrats who have the most favourable opinions about unions and are enthusiastic about hearing politicians support them, not lower and working-class Americans of any political allegiance.

While doubling down on politics runs directly counter to workers’ stated preferences, a strategy of pouring resources into organising in the workplace, or changing the law to make organising easier, is unlikely to fare much better. Just look at the Protecting the Right to Organise Act (known as the PRO Act) which was passed by the House of Representatives in March.

Trumka’s successor as AFL-CIO president, Liz Shuler, said the act “is how we reform our woefully outdated labour laws [and] build a better future by empowering workers to organise and bargain”.

The PRO Act imposes harsher penalties on employers who threaten and retaliate against employees for supporting a union. The reform itself has merit: employers should be sanctioned if they retaliate against efforts at organising. But the idea that bad employer behaviour is what’s really standing in the way of unions is belied by the evidence. More than two-thirds of workers say they’re not sure why they’re not unionised or have never thought about it; just 2 per cent cite a threat of retaliation by their employer. Likewise, while union involvement in politics was the top reason given for voting against a union, retaliation was the least commonly chosen.

Rather than pointing fingers elsewhere, labour reformers need to focus on reforming labour. Opportunities for better bargains abound. For instance, workers express a strong preference for a positive relationship with management, and even for organisations run cooperatively by the two sides, rather than adversarial ones. A better bargain would allow such options, but also require that companies using them allow workers to elect a representative to the company board.

Unions could become vital providers of benefits and training for members, as they are in many European countries, even channelling funds from government programmes and employers. But to do this they would need to get out of politics, like other not-for-profit groups.

That’s a bargain popular with Americans by enormous margins. And with political spending out of the picture, labour law could also move towards a model known as “sectoral bargaining”, where representatives for workers and employers across an industry work together to establish rules that will govern them, instead of federal regulation.

Giving workers more power in the labour market and voice in the workplace would improve their economic outcomes and job satisfaction, improve the competitiveness of companies and enhance civil society. But it requires union leaders and policymakers to listen to them.