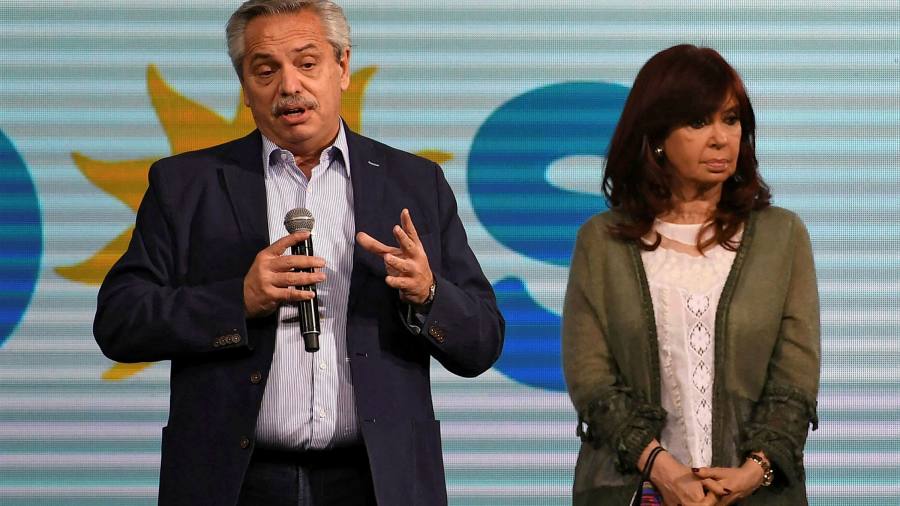 Sign up to myFT Daily Digest to be the first to know about Argentina news.

Argentina’s Peronist president Alberto Fernández reshuffled his cabinet on Friday night in a move which increased the power of radical vice-president Cristina Fernández de Kirchner and paved the way for higher public spending.

Tensions within the ruling Peronist bloc burst into the open after the centre-right opposition coalition scored its best result ever in last Sunday’s primary elections, beating the government by a margin of 9 percentage points. Cristina published an open letter blaming Fernández’s economic policies for the “political catastrophe” of the primaries and demanding changes.

The new appointments suggested that Fernández had ceded further ground to his powerful deputy, who herself served as president from 2007-15 and is widely seen as the real power behind the throne.

The Peronists are fighting to avoid defeat at midterm legislative elections in November, in which their senate majority is at risk.

Fernández’s key ally Santiago Cafiero was replaced as cabinet chief on Friday night by Juan Manzur, the governor of Tucumán province, whom the vice-president had publicly suggested for the job in her open letter published the night before.

“They clashed in the worst possible way, and [this has] continued to escalate. The president threatened to govern alone and Cristina blamed him for the electoral failure,” political analyst Marcos Novaro said. “They might try to mend fences after this, but the damage is done.”

She argued in her missive that the president was following “a mistaken policy of fiscal adjustment” which “undoubtedly was going to have electoral consequences”. GDP collapsed by 10 per cent last year.

Shut out of international markets after its ninth sovereign default in 2020, Argentina has been printing money to finance its government deficit while it tries to reach a fresh agreement with the IMF. Inflation is running above 50 per cent a year, one of the world’s highest rates.

Economy minister Martin Guzmán, who has been severely criticised by Cristina’s allies for trying to reduce the deficit, was not moved in the reshuffle. Cristina denied that she wanted him out and Argentine media speculated that he was being kept in place until an IMF deal was reached.

“The government is now much weaker. Cristina’s wing could start playing a role in which they are sometimes part of the coalition and sometimes not. Or the coalition could break for good,” Novaro said.

The poisonous atmosphere within the Peronist ranks was highlighted by a leaked conversation this week in which one of Cristina’s close allies, finance committee chair Fernanda Vallejos, is heard describing Fernández as a “squatter” (in the presidential palace), who is “deaf”, “blind” and a “clown”. She later apologised for the comments.

Both Cristina and Vallejos have called for higher deficit spending, with Cristina arguing that Argentina has scope to increase this year’s fiscal deficit by an additional 1.5 percentage points of GDP to boost spending ahead of the elections.

Argentina is on track to end 2021 with a fiscal deficit amounting to 5 per cent of GDP, according to the Ferreres consultancy. The extra spending demanded by Cristina would push it above 6 per cent, just as Guzmán tries to reduce the gap as part of an agreement with the IMF to restructure $44bn owed in debt.

“[Cristina’s] economic proposal is inconsistent with the IMF agreement and with long-term sustainability. She is criticising Guzmán because of his very modest austerity policies, which led to their defeat in the election. But she should know that good policy and good politics don’t always go hand in hand, and sometimes what’s right is not what’s popular,” political consultant Sergio Berensztein said.

Even if Guzmán survives as economy minister, he faces huge challenges.

The long-term sustainability of Argentina’s finances is even bleaker than this year’s fiscal deficit suggests, as the 2022 budget will not include revenue from a once-off additional wealth tax imposed during the pandemic. The government must also cope with an additional deficit of three per cent of GDP from the central bank’s deficit-filled balance sheet.