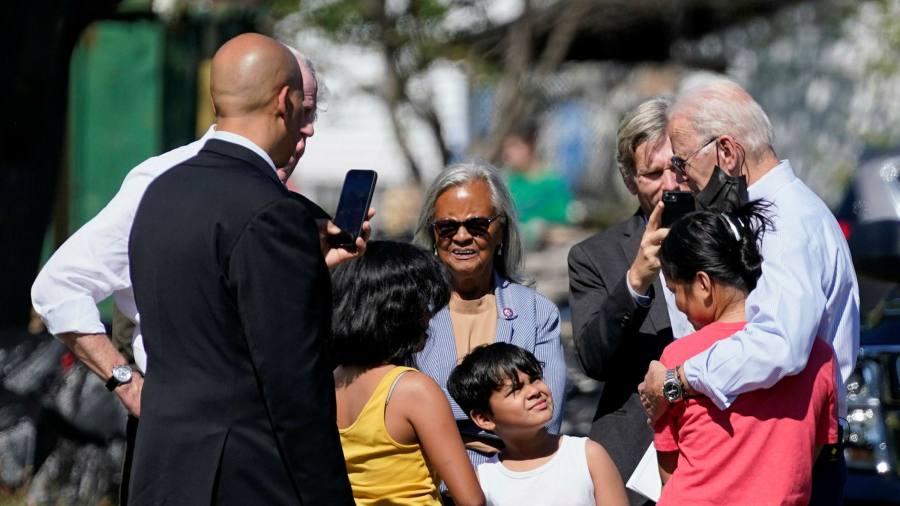 The White House has asked Congress to fund more than $30bn in new spending on disaster aid and relief for Afghan refugees as it pleaded for lawmakers to pass a stopgap bill to avoid a government shutdown.

The request came from Shalanda Young, the acting budget director, as US president Joe Biden toured areas of New York and New Jersey hit by deadly flooding last week, while lawmakers prepared to return to Washington after the Labor Day holiday.

Young said an additional $14bn in funding would be needed to cover aid for parts of the country stricken by extreme weather events over the past 18 months. A further $10bn would be required to pay for the government’s response to Hurricane Ida, she said.

The White House added that it would also need $6.4bn in funding to aid relief efforts for Afghan refugees.

“The operation to move out of danger and to safety tens of thousands of Afghans at risk, including many who helped us during our two decades in Afghanistan, represents an extraordinary military, diplomatic, security, and humanitarian operation by the US government,” Young wrote.

The request for additional funding comes as the White House and Congress are nearing a September 30 deadline to pass legislation to fund government operations, or face a damaging shutdown.

Young asked lawmakers to pass a stop-gap measure known as a continuing resolution that would keep the government funded at current levels while lawmakers take more time to negotiate a permanent deal on the annual budget.

The demands from the White House will further complicate the congressional agenda this month, as Democratic leaders who control both Houses try to pass Biden’s multitrillion-dollar economic agenda.

In a series of very heated negotiations, mainly within the Democratic party, lawmakers will attempt to find compromises allowing both Biden’s $1.2tn bipartisan infrastructure plan and White House-backed legislation worth $3.5tn to expand the social safety net and tackle climate change.

But resisting the additional spending could be hard for Republicans, given the human suffering and economic toll inflicted by the extreme weather, and widespread support for helping Afghan refugees among the US public.