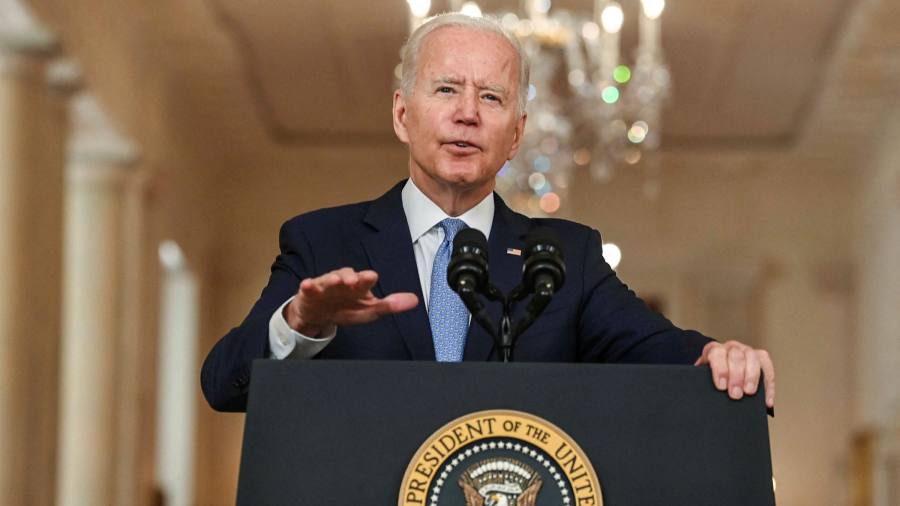 Joe Biden launched his most forceful defence yet of America’s chaotic pullout from Afghanistan, a day after the last US troops flew out of Kabul and ended their 20-year military presence in the country.

In remarks delivered from the White House, the US president attempted to put a lid on the biggest national security crisis since he took office in January and rebut criticism that his administration mishandled the departure.

Biden dismissed suggestions that setting a public deadline to withdraw all US troops from Afghanistan had contributed to a chaotic civilian airlift that resulted in considerable bloodshed.

“Let me be clear, leaving August 31 was not due to an arbitrary deadline,” Biden said on Tuesday afternoon. “It was designed to save American lives.”

The president said his hands had been tied by his predecessor, Donald Trump, who signed a deal with the Taliban to withdraw all US forces from Afghanistan by May 1.

“The previous administration’s agreement said that if we stuck to the May 1 deadline that they had signed, the Taliban wouldn’t attack any American forces,” he said. “But if we stayed, all bets are off.”

Biden said Trump’s deal had left him with a “simple decision”: he could either “follow through on the commitment . . . and leave Afghanistan” or send tens of thousands of extra troops and effectively restart the war.

He added: “That was the choice, the real choice: between leaving or escalating. I was not going to extend this forever war. And I was not extending a forever exit.”

Biden acknowledged that his administration had wrongly assumed the Afghan army would be able to prevent the Taliban from conquering the country at lightning speed but insisted the chaotic airlift — which evacuated more than 100,000 people — had been a success.

“It was designed to operate under severe stress and attack, and that’s what it did,” he added.

After the Taliban took control of Afghanistan, US and coalition forces mounted a desperate effort to evacuate more than 100,000 people © US Air Force/AFP via Getty Image

Biden’s speech came a few hours after Taliban forces assumed control of Kabul’s airport, completing their swift and stunning takeover of the country as the Afghan government withered away over the past month.

The president has long believed in the need to end America’s military presence in Afghanistan, deciding in April to press ahead with exit plans by early September. But the withdrawal turned disorderly and deadly, with a terrorist attack by Isis-K killing scores of Afghans and 13 US troops last week, as US and coalition forces mounted a desperate effort to evacuate more people from the country.

Ending the US presence in Afghanistan as planned has left up to 200 US citizens and many more vulnerable Afghans in the country, where they risk reprisals from Taliban forces.

Top Biden administration officials have said that even though the military’s evacuation efforts have ended, they would keep up diplomatic efforts to get people who want to leave out of the country. But this depends on the Taliban sticking by its pledge to allow the “safe passage” of Afghan citizens to other countries, which Biden urged them to do again on Monday.

After US troops left Kabul, concerns flared that the Taliban would gain control of American military equipment abandoned in the final rush to depart. However, US officials said several Chinook helicopters still at the airport had been rendered “inoperable” before the departure, and they denied reports that they had left US military working dogs in cages at the airport.

Rana Foroohar and Edward Luce discuss the biggest themes at the intersection of money and power in US politics every Monday and Friday. Sign up for the newsletter here