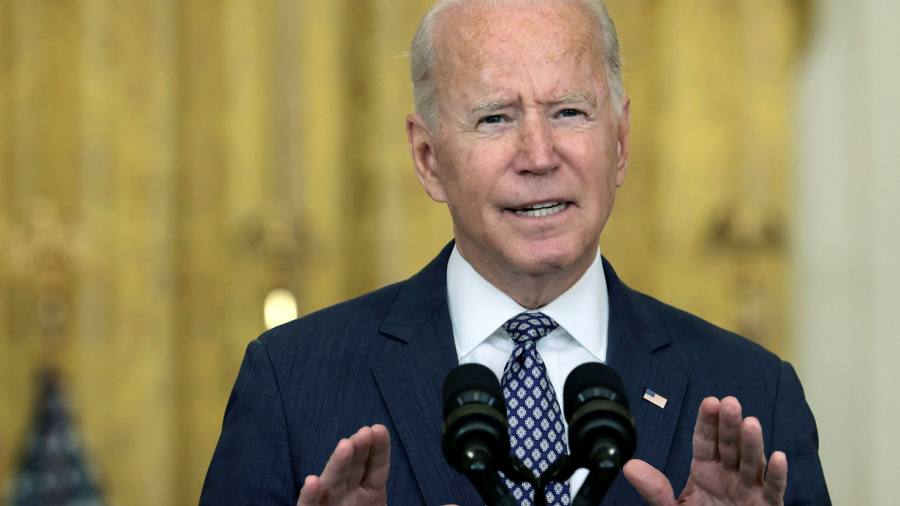 Joe Biden pledged to evacuate every American trying to leave Afghanistan and insisted the botched US airlift was making “significant progress”, dismissing suggestions his administration had ignored warnings the Taliban would conquer Kabul at lightning speed.

“This is one of the largest, most difficult airlifts in history,” said Biden in a televised address to the nation on Friday afternoon. “But let me be clear, any American [who] wants to come home, we will get you home.”

Biden said that the US had evacuated 13,000 people since it commenced its military airlift on August 14, but tens of thousands of US citizens and eligible Afghans are still struggling to reach the airport which is close to the centre of Kabul, the capital city that is now under Taliban control.

The failure to get American citizens and Afghan allies out of the country before the Taliban takeover has become a focus of criticism, with Republicans and even some Democrats questioning why the White House did not move more quickly once the decision to withdraw troops was made in April.

Bill Roggio, a military analyst who is in touch with US citizens unable to reach the airport, said the US evacuation operation was “disgraceful”.

“Six days after the fall of Kabul and there are still Americans trapped behind Taliban lines and every moment matters at this point,” he told the Financial Times. “The Taliban is effectively holding an unknown number of Americans hostage through the situation it’s created outside the airport, by not allowing safe passage to the airport.”

Biden said that the administration was in “constant contact” with the Taliban and that to “the best of our knowledge” the Islamist group was allowing American passport holders to go through checkpoints it has set up outside the airport.

Major General William Taylor, the US military leadership’s deputy director for regional operations, said the Taliban conversations were occurring both with the Islamist group’s leadership and on the ground near the airport. “The things we are asking for — passages — are happening and getting better,” Taylor said.

Nato foreign ministers issued a statement on Friday calling “on those in positions of authority in Afghanistan to respect and facilitate . . . safe and orderly departure, including through Hamid Karzai International Airport in Kabul”. Biden conceded that other people trying to flee the county were stuck in the “crowd of all the folks just outside the wall near the airport” and said the administration was “considering every opportunity, and every means by which we can get folks to the airport”.

The military had already gone “over the wall” and rescued 169 Americans, he added. John Kirby, the Pentagon spokesman said the incident occurred “very close to the perimeter of the airport — very close”, and that US troops had moved on foot to pull the evacuees into the airport.

However, Biden dismissed suggestions that the US military should expand the perimeter outside Kabul airport, hinting that it could exacerbate the already volatile situation and result in an “awful lot of unintended consequences”.

Kirby said the military was “prepared and postured” to go further beyond the airport perimeter to rescue trapped people trying to flee but that “the main focus is on security at the airport, and making sure that . . . air operations resume and continue”.

The president also made his most full-throated commitment so far to rescue Afghans who have aided the US mission in the country and are eligible to leave, adding they were “equally important, almost” as US citizens.

The US was forced to suspend the evacuation effort on Friday for about seven hours as officials struggled to build up capacity at a US air force base in Qatar to process Afghans fleeing the country.

“We paused flights in Kabul for a few hours this morning to make sure we can process the arriving evacuees at the transit point, but our commander . . . has already given the order for outbound flights to resume,” Biden said, adding that the US had evacuated 5,700 people on Thursday.

About 11,000 US citizens have preregistered their presence in Afghanistan, while tens of thousands of Afghans who helped the US mission are also eligible for evacuation. US defence officials say they have capacity to fly out 5,000-9,000 people a day from the airport, but have managed only 2,000 a day. US officials attribute this to slow processing of names by the state department as well as Taliban checkpoints throughout the city that are preventing evacuees from getting to the airport. As of Friday, the US had 5,700 troops at the airport.

Biden had committed to leave entirely by August 31, but has hinted he could extend the timeline.

Meanwhile, the president dismissed suggestions his administration ignored warnings that the Taliban would take Kabul as rapidly as it did. The swiftness with which the Islamist group took over the capital has resulted in a much slower and more dangerous airlift than the military had planned for.

Nearly two dozen state department officials sent a classified cable to Antony Blinken, US secretary of state, in July, which warned the Taliban’s advance was much more imminent than other assessments had concluded.

“We got all kinds . . . of advice,” Biden said, adding that the consensus opinion was that Afghan forces — who quickly crumbled in the face of the Taliban’s advance — would successfully defend the capital until later this year.

He said: “I made the decision, the buck stops with me. I took the consensus opinion.”