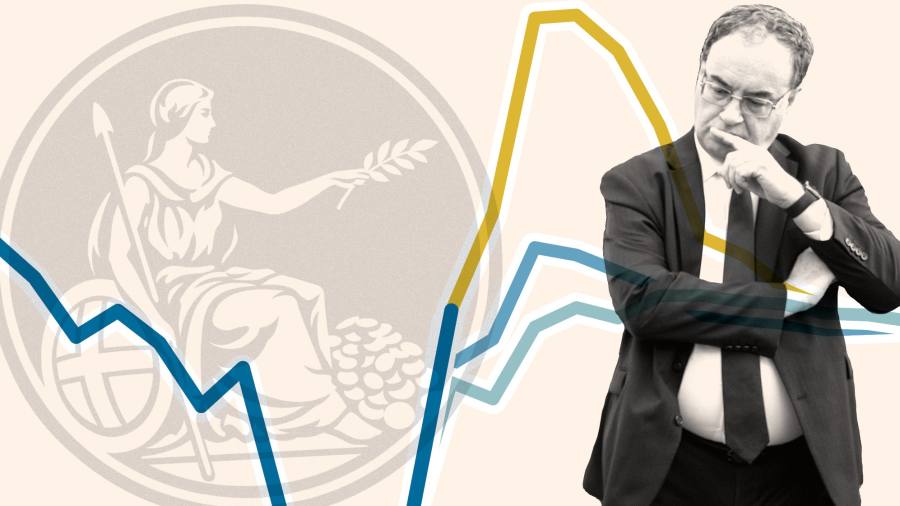 Sign up to myFT Daily Digest to be the first to know about UK interest rates news.

The Bank of England was not expecting to change its coronavirus monetary policy guidance so soon.

For the past year it has said it would not even consider tightening monetary policy “until there is clear evidence that significant progress is being made in eliminating spare capacity and achieving the 2 per cent inflation target sustainably”.

With inflation having already burst through this target, reaching 2.5 per cent in June and the BoE now thinking it will rise to 4 per cent later this year, and signs of labour shortages across the economy, the committee decided to drop that guidance.

None of the Monetary Policy Committee was ready to raise interest rates yet from the historic low of 0.1 per cent, but the committee agreed new guidance that said if economic data followed its latest forecasts, “some modest tightening of monetary policy over the forecast period is likely to be necessary to be consistent with meeting the inflation target sustainably in the medium term”.

The change and the new guidance raised lots of legitimate questions on what the MPC meant in practice, but Andrew Bailey, BoE governor, was not in a mood to be transparent when discussing the committee’s new stance at a press conference on Thursday.

He declined to answer simple questions about the balance of opinion on the committee and the definition of “modest”, but he was a little more forthcoming in his press conference on what the trigger would be for higher interest rates. 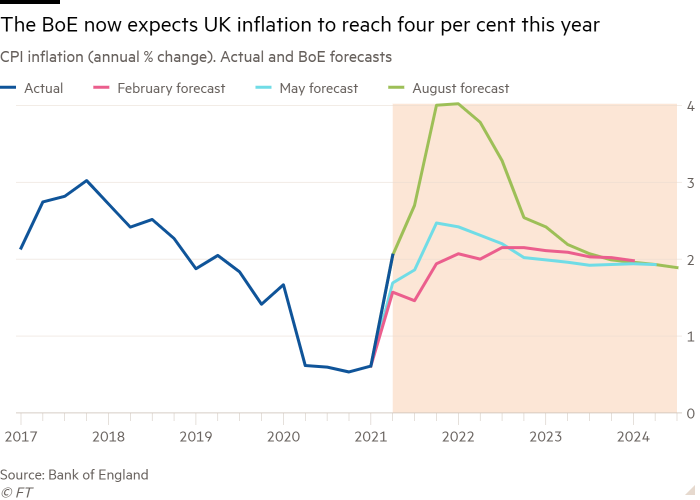 The first two “key judgments” that the MPC would consider before changing policy were its view that much of the coming rise in inflation would reverse automatically next year and that there would be a continued recovery as the pandemic waned. On these Bailey was confident the committee’s view was right. It was a third judgment, on the labour market, that he stressed was most likely to prove the trigger for higher interest rates earlier than expected in the months to come.

The outlook for employment has already changed much faster than expected, with many employers now struggling to hire even though both unemployment and inactivity remain well above pre-pandemic levels.

“The challenge of avoiding a steep rise in unemployment has been replaced by that of ensuring a flow of labour into jobs,” Bailey told the news conference, adding that the committee would closely monitor labour market developments, particularly on unemployment, wider measures of slack in the economy, and underlying wage pressures.

Underlying wage growth has already returned to near pre-pandemic levels, the bank estimates. This is much stronger than expected given the large number of workers still standing on the sidelines: there are 250,000 more unemployed than pre-pandemic, 750,000 more counted as inactive, and 2m still at least partly furloughed in late June.

But what is worse from an inflation perspective is that the BoE has found evidence of “frictions” in the labour market, especially the difficulties employers are reporting in recruitment.

For now, the MPC is taking the view that these problems are temporary and are “likely to dissipate” with the hiring crunch owing in large part to the speed at which entire sectors reopened. Another factor behind the shortages — existing employees’ apparent reluctance to look for a new job — would in any case be more likely to depress wage growth than to fuel it. 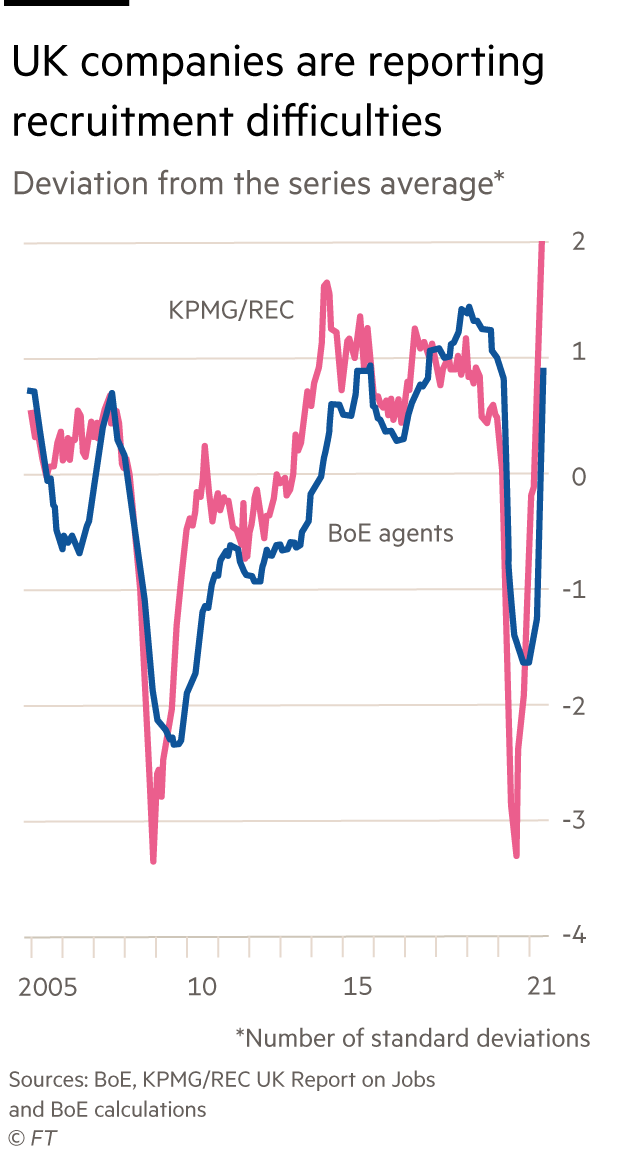 But the MPC warned that if labour shortages proved bigger and more persistent than expected — if workers were in the wrong place, or had the wrong skills, for the jobs available, or if young people who had left the labour market to study stayed in education for some years — that was likely to make wages rise, inflation more persistent and the BoE raise interest rates.

When it does become time to tighten monetary policy, the BoE also changed its guidance on Thursday on how it will make borrowing more expensive for households, businesses and government.

Until Thursday, the BoE’s declared policy had been that it would not change the level of money created and assets purchased under its quantitative easing scheme until interest rates had reached 1.5 per cent.

In future, it said that once interest rates reached 0.5 per cent, it would no longer reinvest the proceeds of government bonds that reached maturity and were redeemed.

Bailey said this new policy of quantitative tightening was not supposed to supplant higher interest rates, but would provide a “predicable and gradual” path for reversing quantitative easing. Some £70bn of the BoE’s £875bn gilt holding are due to mature across 2022 and 2023, with another £130bn across 2023 and 2024, he added.

Once interest rates rose to 1 per cent, the MPC said it would consider active sales of the assets it owned, but only if that was warranted by economic conditions and sales “would not disrupt the functioning of financial markets”.

In both areas of policy, the BoE was adamant it was making no promises and would change policy only when that was needed to keep inflation under control. This meant the wait-and-see strategy that has been its watchword since the early days of the coronavirus crisis would continue.

But as Ruth Gregory, senior UK economist at Capital Economics, said: “Talking about the mechanics of tightening policy, that is another signal that tightening is drawing nearer”.