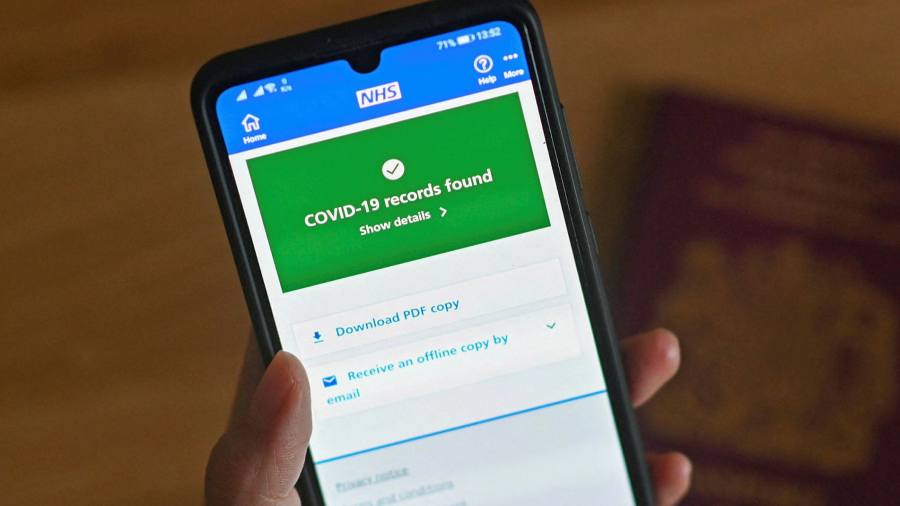 The parliamentary Conservative party painted the town blue on Monday. Packing out the House of Lords terrace — one of London’s best vistas — hundreds of MPs supped champagne and munched on mini fish and chips to celebrate “normality”. Prime Minister Boris Johnson told them that were the Labour party in charge, the UK would still be suffering Covid restrictions.

The scene mirrors the national mood. After so-called Freedom Day at the end of July, life in Britain feels surreally normal. Social distancing has ceased, events have resumed. The only signs of a pandemic are optional masks on public transport and in shops. After enduring 18 months of hell, the attitude is “see no Covid, hear no Covid, speak no Covid”.

Yet the pandemic is far from over. The UK is in the throes of a wave that could overwhelm the NHS if hospitalisations rise too rapidly. Newly reported Covid cases are running above 35,000 a day, with daily patient admissions close to 1,000 every 24 hours. The optimists hope that the wave is peaking and will eventually fizzle out. The pessimists fear worse is to come.

Discussions in Whitehall focus on how to get through the winter under the combined pressure of coronavirus, flu and long NHS waiting lists. The mooted idea of an October “firebreak” lockdown to ease the pressure has “almost zero chance”, says one minister. If the situation worsens, Johnson would first try everything else, starting with mandatory masks, then social distancing, then restrictions on indoor gatherings.

The most divisive measure, however, is vaccine passports. Requiring proof of Covid jab status is deemed discriminatory by some, common sense by others. Passports clash with conceived notions most Britons hold about their relationship with the state, but they will be mandatory for big events and at some indoor venues in England within weeks. The government’s approach is carrot and stick: allowing festivals and football, while encouraging the vaccine hesitant to get jabbed.

But the passports are sparking an immense political row, especially within the Tory party. Libertarians who bristle at any further Covid restrictions are gearing up to fight the proposals. The most outspoken is Steve Baker, a former Brexit minister, who has warned that vaccine passports would set a “dangerous precedent for the advance of the biosecurity state”. At least 50 other Tory MPs and scores of ministers agree with him.

The battle crosses party lines. Scotland’s first minister, Nicola Sturgeon, has introduced vaccine passports only to find the Scottish Labour party opposes them. Anas Sarwar, Labour’s leader north of the border, says that “there is a fear that using vaccine passports might actually entrench vaccine hesitancy”. The UK Labour party will be under pressure to follow them, joining the Liberal Democrats, who also staunchly oppose them.

Some scientists are sceptical too. “In some sense coercion often hardens people’s views,” says Neil Ferguson, professor of epidemiology at Imperial College London. “And if somebody is resistant to being vaccinated, these sort of measures may well not be very effective at increasing vaccine uptake.” But the soaring vaccination rates in France, where vaccine passports are already in place, suggests otherwise.

The Tories find themselves in an uncomfortable ideological knot. A party that fought for centuries for individual liberty is now advancing the state’s reach. No one feels this more than Johnson, who pledged to “masticate” any identity card to “the point of illegibility”. He once fumed: “I loathe the idea on principle. I never want to be commanded, by any emanation of the British state, to produce evidence of my identity.”

But the lesson of the pandemic is that Covid-19 does not have much time for liberties. When it comes to passports, one influential Tory sighs, “it is inevitable . . . but it is another thing to annoy the right”. For the prime minister, the calculation is that if there is a choice between passports and lockdown the answer is clear, however intolerable. But he must make that case to his opponents. Otherwise a bruising political fight lies ahead.