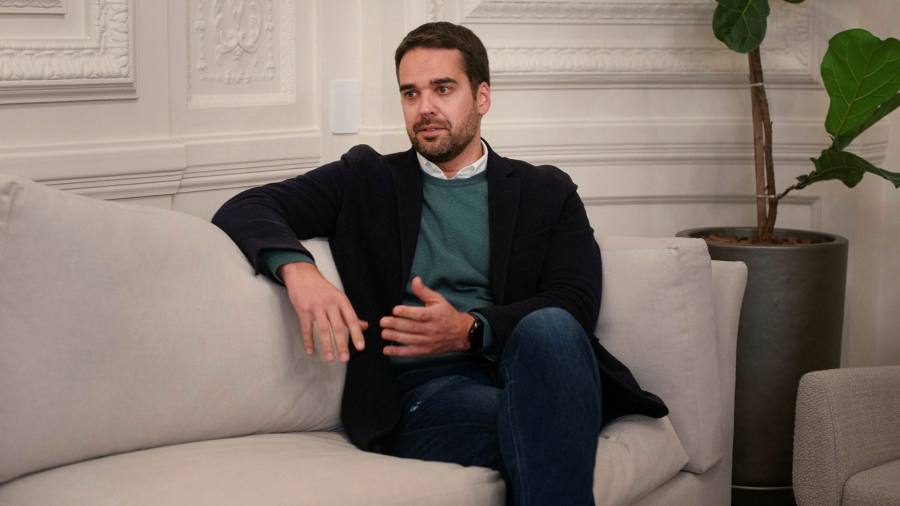 Sign up to myFT Daily Digest to be the first to know about Brazilian politics news.

Filled with dread at the prospect of a bitter election fight next year between two ageing past presidents offering divisive rhetoric and chequered records, many Brazilians are looking for an alternative.

Eduardo Leite believes he is the answer.

The 36-year-old leader of Rio Grande do Sul, Brazil’s southernmost state made headlines in July when he came out as the country’s first gay governor. This was a brave move, given far-right President Jair Bolsonaro’s homophobic boasts and past remarks that Brazil “doesn’t like homosexuals”. But Leite told the Financial Times that the reaction to his announcement had proved the president wrong.

“I received a big welcome, expressions of a lot of respect and I am happy that the country is changing despite the leadership of the president,” he said in a Zoom interview. “The population accepts and respects [my sexuality]”.

Leite’s political career began in his home town of Pelotas as a city councillor at the age of 23. Four years later he won election as mayor and in 2018 he triumphed in the governor’s race. He ran under the banner of the Social Democratic party (PSDB), a centre-right grouping which held the presidency from 1995-2002 but has since been eclipsed by the political extremes.

“Leite is a really interesting guy and has got a solid track record,” said Oliver Stuenkel, a political scientist at the Getúlio Vargas Foundation in São Paulo. “He is young so he can symbolise renewal and he’s the dream candidate of the liberal/economic elite. But his Achilles heel is that he didn’t clearly oppose Bolsonaro in the 2018 election . . . That will make it very hard for him to reach out to people who are centre-left and left.”

Latin America’s biggest economy, Brazil faces huge challenges as it recovers from the human and economic devastation of coronavirus. More than 585,000 people have died and the numbers of poor and unemployed have jumped, prompting calls for higher social spending and fairer taxation.

Bolsonaro wants a second term but the far-right populist’s bungling of the pandemic, his strident attacks on democratic institutions and missteps on the economy have combined to sink his ratings.

Former president Luiz Inacio “Lula” da Silva will make a sixth bid for the presidency at the age of 75. Polls show him in the lead, but many Brazilians still associate him with the extensive corruption uncovered in the Car Wash investigation — Latin America’s biggest bribery scandal.

Before joining battle with these two political giants, Leite must overcome a number of hurdles.

The first is to win the presidential nomination for the PSDB. The party is split over how to respond to Bolsonaro and its highest profile national figure, São Paulo governor João Doria, is unlikely to give up his own presidential aspirations despite low polling figures.

Leite must then win enough votes in the first round of the presidential election to force a run-off. With just over a year to go, the latest polls show Lula close to securing a first-round knockout, with 40 per cent support.

Another drawback is that Leite has nowhere near Lula or Bolsonaro’s name recognition. “That’s a traditional challenge for outside candidates,” said Stuenkel. “That’s why parties have always liked to bring in well-known people, such as sports stars or TV presenters.”

We have a country with immense inequality in society, the economy and in opportunities . . . But it is possible to rapidly go down a different path

The governor insists that the high levels of rejection towards Lula and Bolsonaro offer an ideal scenario for a “third way” candidate. It is also true that Brazil can spring political surprises: Bolsonaro was little known when he launched his presidential bid and few fancied his chances.

Opinion polls show Leite’s current support among voters, like most of the putative “third way” candidates, is still in low single digits — but this can change rapidly once the campaign gets under way.

Leite says he will run on his record in Rio Grande do Sul, a mainly agricultural southern state bordering Argentina and Uruguay, where he has attempted to balance budgets, cut bloated public sector pensions and privatise state utilities, though he also acknowledges the need for a fairer society.

“Brazil has an immense opportunity for economic growth and for overcoming its challenges,” he says. “It’s not easy, we have a country with immense inequality in society, the economy and in opportunities . . . But it is possible to rapidly go down a different path.”

The key, he explains, is to calm the tensions inflamed by Bolsonaro by opening up dialogue and stabilising the country to encourage investment. This approach has won him friends among Brazil’s liberals and its business community.

Former central bank president Arminio Fraga describes Leite as “very impressive”. Were he to win his party’s nomination “I think he would surprise people. I think Brazilians are fed up with all the crazy things and it would be refreshing to have something different that feels grounded.”

What is harder to see is whether Leite’s unabashed support for a liberal, free-market economic agenda — and his vote for Bolsonaro in the second round of the 2018 election, which he now describes as a mistake — will win over voters worried about rising inflation and high joblessness.

Federal lawmaker Bruno Gass of Lula’s Workers Party dismissed talk of a “third way” candidate. “All those people who want to present themselves as ‘third way’ agree with Bolsonaro’s economic agenda,” he said. “Eduardo Leite is a classic example”.