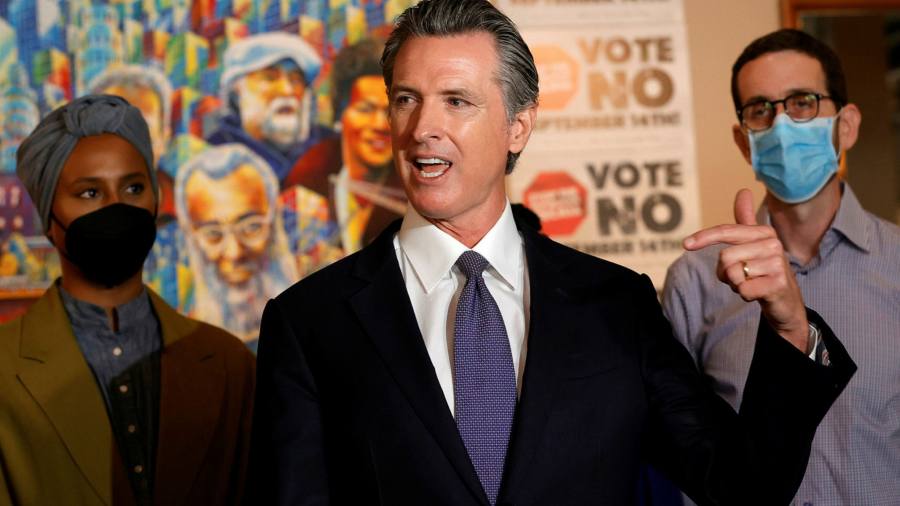 Sign up to myFT Daily Digest to be the first to know about California news.

Last November, Gavin Newsom ate what could turn out to be the costliest meal in Californian history. The state governor’s decision to fine-dine indoors while urging restraint on others during California’s lockdown was crass enough. That the occasion was a lobbyist’s birthday rounded off the sin. Within months, Republicans, who chafed at his pandemic rules, had enough names on an existing petition to force a recall vote. Californians must choose on September 14 whether to ditch the once-feted Democrat and, if so, which of 46 hopefuls should replace him. At stake is the leadership of a France-sized economy.

No PR gaffe, however bad, endures unless it encapsulates wider failings. California’s anger goes beyond one Marie-Antoinette moment. Despite some of the nation’s strictest rules, including a brief ban on outdoor dining, it has the highest death and case toll. Some of that is a function of its size. But misgovernment, economic inequities and patchy public services are also at fault. Rough-sleeping mars its cities. Mighty unions block reform: teachers kept schools shut for so long as to enrage even liberal parents. As for the assaults of climate change, few states are more exposed.

At this point, a Californian optimist is entitled to yawn and ask what is new. The state has had dysfunctional governance before. Its politics are a dog’s breakfast of direct democracy and one-party rule. It has combined fiscal deficits and threadbare infrastructure. This is not even the first gubernatorial recall of the young century. None of these supposed crises have toppled it as the richest state in the union and the technological heart of the world. In job creation, household income and productivity growth, it remains a template for other states.

It is true enough that private dynamism can withstand public chaos. The US itself is proof of that. The question is for how long. Over the past decade, California’s population grew more slowly than the national average. It is being docked a Congressional seat as a result. Talk of exodus is rash, but much of the slowdown in growth predates the pandemic, the wildfires of recent years and other incentives to leave. Unaffordable and unlivable cities are among the more structural factors at work.

Nor does the state exist in a vacuum. Texas and Florida are among those vying for the young talent that California once lured with no great effort. One of the reasons it survived past troubles was that geographic location mattered. For a venture capitalist or an artist, proximity to Palo Alto or Los Angeles mattered. Technologies invented or based in California have made that less true.

A mature political system would be seized with these questions. California’s is mired in a long recall saga that dwells on personality and process. Whether the election was to be in September or November (the former won) was a consuming issue. In a sense, California’s past resilience to its own dysfunction is the problem. It encourages the belief that it can repeat the trick indefinitely.

For now, Newsom is favoured to hang on. Polls suggest a closer race than was expected in the spring, when the state was opening up and the Delta variant had not commenced its grim work. But California is “bluer” than it was when it recalled a Democratic governor in 2003. There is no Republican alternative as famous as Arnold Schwarzenegger was then. The incumbent also has campaign funds to spare. It is said that nothing threatens him so much as registered Democrats taking the result for granted. As to what threatens the state, look to another kind of complacency.