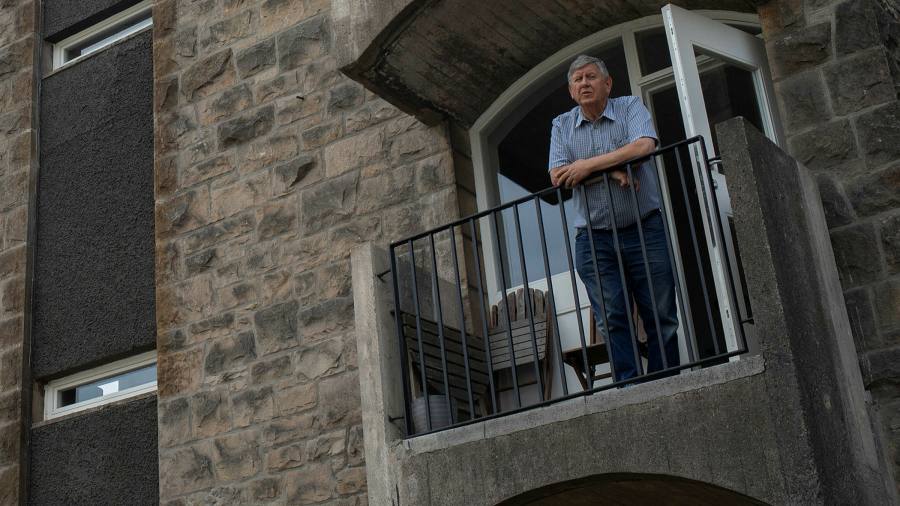 Sign up to myFT Daily Digest to be the first to know about Carbon footprint news.

The flat David Brown owns on Edinburgh’s historic Royal Mile was designed by a celebrated architect and is considered by experts an essential part of the thoroughfare’s rich heritage, but when he bought it a decade ago he learned not to leave furniture resting against exterior walls.

“There was black mould,” Brown recalled. “I had to try and keep the air circulating.”

Poor insulation and damp are issues familiar to many owners of heritage buildings. But amid the global climate crisis, they are far from just personal problems. And a groundbreaking refurbishment project of the complex that includes Brown’s flat illustrates the challenges ahead for both owners and authorities.

The UK’s official climate advisers have warned the national housing stock — which is among the least energy efficient in Europe — is generally “unfit” and the government will not meet its emissions targets without the “near complete elimination” of those from buildings. But residential carbon dioxide emissions, most of which come from gas heating, have actually risen since 2015.

Dramatically reducing the energy needed to heat heritage buildings, like Brown’s, is a particular challenge as the properties are subject to conservation laws.

In Scotland alone more than 47,000 such buildings are “listed” as of special historic or architectural interest, a designation that often rules out measures such as adding layers of insulation to outside walls or replacing original windows.

Edinburgh World Heritage, the charity that monitors and supports conservation in the Scottish capital’s Unesco-recognised city centre, said there was an urgent need for better understanding of how older buildings can simultaneously be preserved and made more energy efficient.

“The retrofit of historic buildings is currently being hindered to some degree by a lack of clarity on what interventions are effective and are sensitive,” said Christina Sinclair, EWH director.

The charity has begun a series of pilot projects that it hopes will show how listed buildings can be made more efficient and Sinclair said the first — a retrofitting of the Royal Mile complex in which Brown has his flat — showed that conservation and sustainability could go “hand in hand”.

Exteriors of the 1960s development by Sir Basil Spence, considered by authorities an “important example of Scottish Post-War housing”, have been restored and a hodgepodge of windows replaced by custom-made substitutes matching the architect’s original design have been installed.

Together with cavity wall insulation and a new heating system, EWH estimates the work has cut carbon dioxide emissions from the 14 properties involved by 54 per cent — equivalent to 25 tonnes of CO2 a year — and will reduce their energy bills by 40 per cent. Sinclair hopes that similar gains can be made with future pilot projects involving Edinburgh Old Town tenements or Georgian New Town town houses. But such older buildings, with their often delicate fabric and solid masonry walls, may prove more challenging.

Craig Ross, senior specialist for building standards at the Royal Institution of Chartered Surveyors, said many of the retrofitting techniques used on modern houses will simply not be permitted for buildings with the highest English listing of Grade I, or its Scottish equivalent Grade A.

Dan Stone, project manager at the Centre for Sustainable Energy, a Bristol-based charity, said one of the biggest problems was making older buildings energy efficient enough to support a low-carbon heating system such as an electric heat pump.

Buildings constructed before 1919 had open fires and were designed to breathe. Problems can occur when you trap moisture into heritage buildings and many of the materials needed to make improvements can be more expensive.

Conservationists say lower efficiency standards for older buildings can be justified by the carbon emissions that would be needed to build replacements, as well by their cultural value and their role in attracting tourists to cities such as Edinburgh or Bath in England, also a World Heritage site.

Dominic Tristram of Bath’s Green party said authorities could do more to push for improvements to older buildings that poorer residents struggled to heat. “There’s no incentive or pressure on landlords to make their houses more efficient because it’s a cost to them,” Tristam said.

The UK government has yet to set a promised heat and buildings strategy, however, while a draft strategy published for consultation by the Scottish government in February had little specific to say about listed buildings.

One uncontroversial way to cut emissions is to promote basic maintenance, a particular challenge in older buildings with multiple owners. Derek Thomson, outside the building (dating to approximately 1790) in which his home is, in Rose Street, Edinburgh © Jeremy Sutton-Hibbert/FT

Edinburgh resident Derek Thomson said that despite crumbling stonework and chronic roof leaks into his top floor flat, it took years of effort to get all fellow owners to sign up to restoration of the 18th century New Town block. “This is a gem of a building . . . But I sometimes rued the day I bought it,” Thomson said.

External funding can smooth the progress of the often very expensive work needed on listed buildings. The Royal Mile project had hefty backing from EWH and its partners, including a £330,000 grant from Scottish Power Networks Green Economy Fund.

Brown said such backing had made possible an “astonishingly efficient” heating and ventilation system and the prospect of much lower bills for his flat, even though he still keeps the furniture clear of the walls. “It’s just habit,” he said.