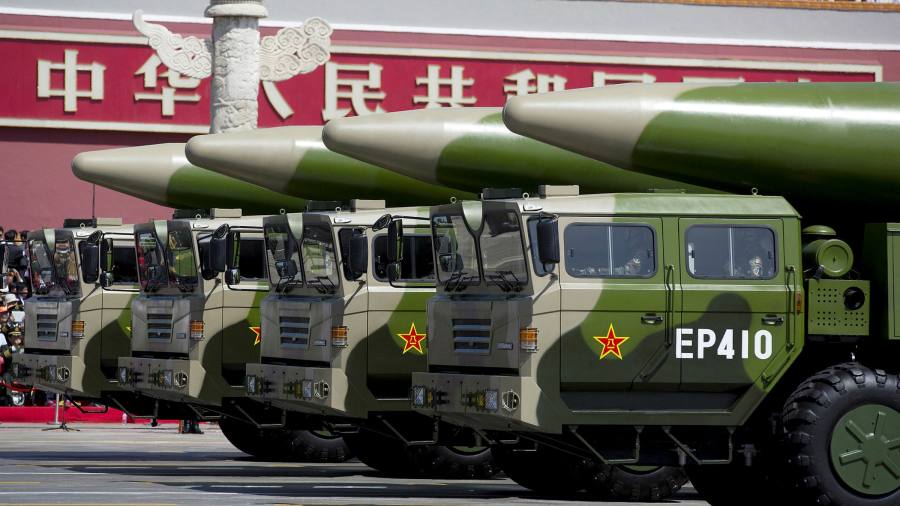 Sign up to myFT Daily Digest to be the first to know about Nuclear proliferation news.

One of Joe Biden’s most urgent missions on taking office was to rescue nuclear arms control. Two weeks after his inauguration, the US president extended the New Start Treaty with Russia, a cornerstone of arms control that a fractious relationship had left at risk of expiring.

But the Biden administration has now been forced to confront another nuclear challenge: China. Since June, experts have discovered more than 200 missile silos under construction in the country’s remote western deserts.

“For a very, very long time, we talked about China as a future problem. Now, China is clearly a nuclear problem,” said David Santoro, president of Hawaii-based think-tank Pacific Forum and a co-organiser of semi-official US-China nuclear dialogue for 15 years until 2019.

“We have known for a while that China is in a nuclear build-up situation. What is happening now is a more rapid build-up.”

Matt Korda and Hans Kristensen, the nuclear arms experts who last week revealed an 800 sq km missile silo construction field in Xinjiang, said it was the “most significant expansion of the Chinese nuclear arsenal ever”.

They believe that China is building 10 times as many silos for intercontinental ballistic missiles as it has in operation now. According to their calculations, the expansion exceeds the number of Russia’s silo-based ICBMs and equals at least half of the US’s total ICBM force.

Since its first atomic test in 1964, China has adhered to a “minimum deterrence” policy, pledging to acquire no more nuclear capabilities than required for retaliating against an attack and claiming it would never use nuclear weapons first.

As a result, China is believed to have about 350 nuclear warheads, according to the Stockholm International Peace Research Institute, a fraction of America’s 5,550 warheads.

Unlike the US and Russia, Beijing has traditionally kept a large portion of its atomic weapons on low alert and held many warheads in central storage separate from their launchers. This was because of its policy to strike only after an enemy missile hit Chinese territory.

But those cornerstones of Chinese nuclear doctrine are being eroded.

Beijing views Washington’s development of missile defence systems as a threat because it could render their minimal second-strike capability useless. China also worries about US reconnaissance activities along its coast where it has strategic assets, as well as American space-based military assets.

In semi-official bilateral meetings, Chinese participants made clear that Beijing might counter these US strengths by building a larger and more sophisticated nuclear force.

Experts believe that Beijing is moving towards a “launch on warning” posture. Instead of preparing to absorb an adversary’s nuclear first strike before retaliating, China would launch a counterstrike as soon as it became aware that an attack against them was under way.

Meanwhile, the People’s Liberation Army has acquired more mobile ICBMs, which make it harder for an adversary to detect nuclear weapons. They have also mounted more warheads on submarines and ballistic missiles, suitable for both conventional and nuclear munitions, such as the DF-26, a missile that can hit Guam, the US Pacific territory.

US analysts warn that the changes are destabilising. “They don’t have the command and control platforms to manage their sea and air platforms,” said Pacific Forum’s Santoro.

“On land, you can keep warheads and launchers separate, but you cannot do that on a sub. What we worry about is that we have commanders who could strike without a link to Beijing.”

Beijing, however, appears to be taking even greater strides.

“Technical level considerations have motivated the modernisation of China’s nuclear forces in recent years, but this is bigger,” Zhao Tong, a nuclear policy expert at the Carnegie-Tsinghua Centre for Global Policy in Beijing, said about the missile silo programme.

“The expansion of China’s nuclear arsenal is increasingly driven by a change in geopolitical perspective,” he said.

“There is a popular thinking in Chinese policy that a larger nuclear arsenal could help China counter the perceived strategic hostility of the US,” he added. “They argue that Russia has been very firm in enhancing its interests, and that Russia is respected, so they think that a larger Chinese arsenal would also make the west respect us.”

Such thinking is backed from the very top. Shortly after Xi Jinping assumed the leadership of the Communist party, he described the PLA’s missile forces as “the strategic support for the country’s status as a major power”, giving China’s nuclear weapons a high-profile geopolitical role they had never played before.

In March, Xi urged the military to “accelerate the creation of an enhanced strategic deterrent and joint warfighting systems”. The remarks were interpreted by Chinese analysts as the most explicit signal yet of top-level support for stepping up the development of the country’s nuclear forces.