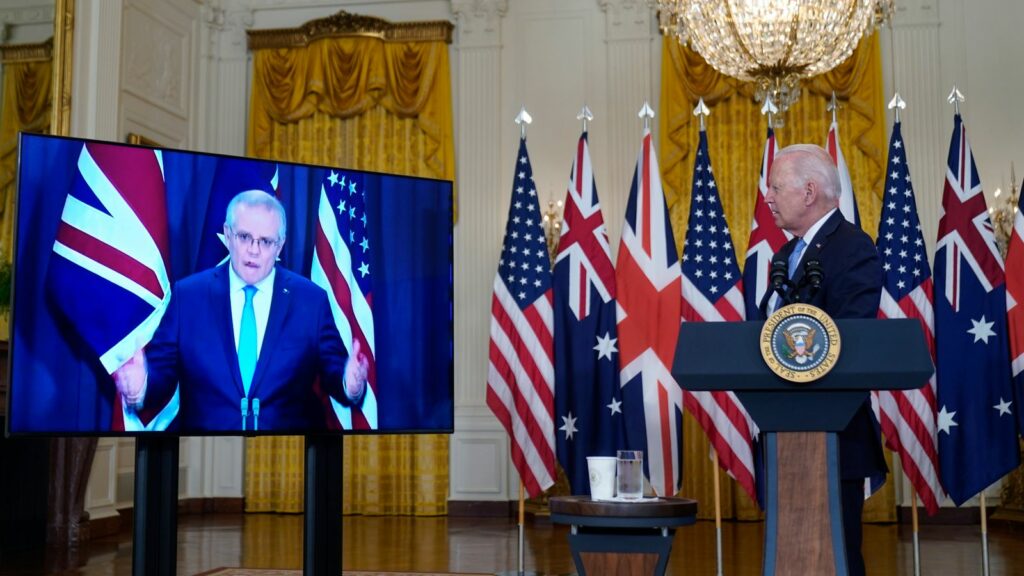 The new deal will only add to China’s unease at being geographically hemmed in by allies of America but says it has the “capacity, resources and determination to match everything that is thrown at it”.

China has been making much of the US’s chaotic retreat from Afghanistan, pointing to it as proof of America’s retreat from its global role.

It may have spoken too soon. The US did retreat – but only to pop up in China’s backyard with the new AUKUS pact.

The new alliance is a serious statement of intent. America does not hand over military secrets lightly but has overcome the security and economic concerns to furnish Australia with state-of-the-art nuclear submarines.

China reacted angrily, describing the agreement as “a highly irresponsible act” which “severely damages regional peace and stability”. It will be alarmed.

From China’s perspective, the US has long hemmed it in – with a presence stretching down and around from China’s north east in Japan, through South Korea, US ally the Philippines, Australia and India (much closer to the US these days because of the deadly border disputes with China in the Himalayas).

Australia’s position in that chain has now been greatly strengthened. According to the Chinese Ministry of Foreign Affairs, Australia is “solely responsible” for the current “difficult” Chinese-Australian situation.

China might want to ask instead why Australia has committed so heavily to the US, the supposedly fading power.

Only a few years ago Australia was hedging, insisting it didn’t have to choose between the US and China, a vital trading partner. That was why it signed a deal with the French in 2016 for diesel-powered submarines, rather than nuclear-powered, because Australia didn’t feel that the strategic situation demanded it.
That has all changed. China’s boycott of Australian goods, because the latter had the temerity to ask for an investigation into the origins of COVID-19, and China’s militarisation of the South China Sea have altered the calculus.

China’s aggressive foreign affairs strategy has won plaudits from nationalists at home. But it has created a new alliance it could do without.

So a contest for the Indo-Pacific region is truly under way. China will surely respond. But if it does so aggressively, it could end up pushing more Pacific countries into America’s embrace.