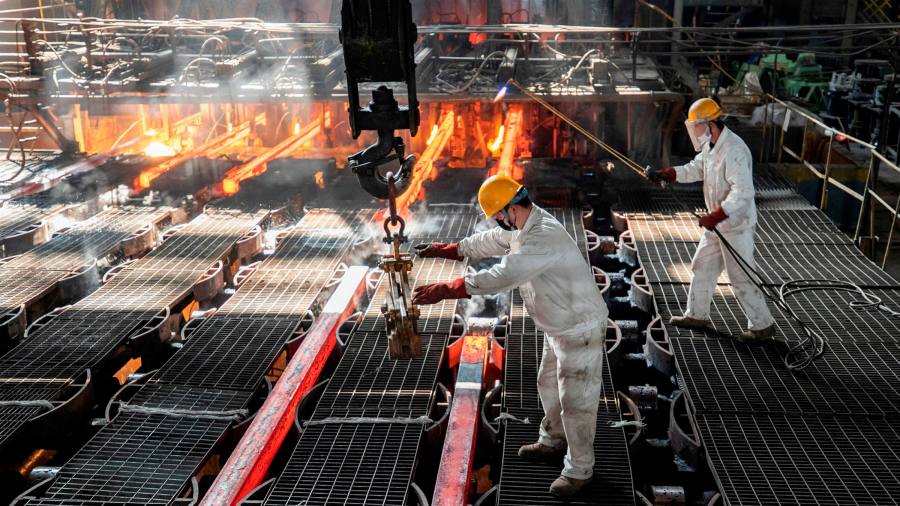 Chinese manufacturing and services activity edged close to a contraction in January, official data showed, as the country’s zero-Covid strategy compounds a slowdown in the property sector.

China’s manufacturing purchasing managers’ index was 50.1 in January, from 50.3 a month earlier and just holding above the 50-point threshold that indicates expansion rather than contraction, according to the National Bureau of Statistics.

A separate independent gauge of factory activity reflected the downturn is worse among smaller manufactures who are being hit by weakening export demand. The Caixin manufacturing PMI declined to a low of 49.1, from 50.9, near its lowest points since the start of the pandemic.

“From December to January, the resurgence of Covid-19 in several regions including Xi’an and Beijing forced local governments to tighten epidemic control measures, which restricted production, transportation and sales of manufactured goods,” said Wang Zhe, a senior economist at Caixin Insight Group.

“It became more evident that China’s economy is straining under the triple pressures of contracting demand, supply shocks and weakening expectations.”

The official NBS non-manufacturing index, composed of the services and construction sectors, was still in expansion territory at 51.1. but down from 52.7 a month earlier. The decline highlighted the hit to local consumption activity from the lockdowns in several major Chinese cities as well as travel restrictions.

“The measure for employment fell to its lowest since April 2020, marking its sixth straight month in contractionary territory,” Caixin’s Wang Zhe said.

Goldman Sachs analysts noted that “high-contact consumer services, including accommodation and transportation, were below [the 50 point marker] due to local outbreaks in January.”

The latest data on China’s economy came two weeks after the country’s gross domestic product in the fourth quarter expanded 4 per cent year-on-year. That marked a decline from 6.5 per cent growth over the same period in 2020 and the slowest pace of year-on-year growth in almost 18 months.

The slowdown has prompted a series of monetary and policy easing measures over recent weeks as Beijing tries to minimise collateral damage from a real estate crisis as well as counter the effects of restrictions imposed to curb the spread of coronavirus.