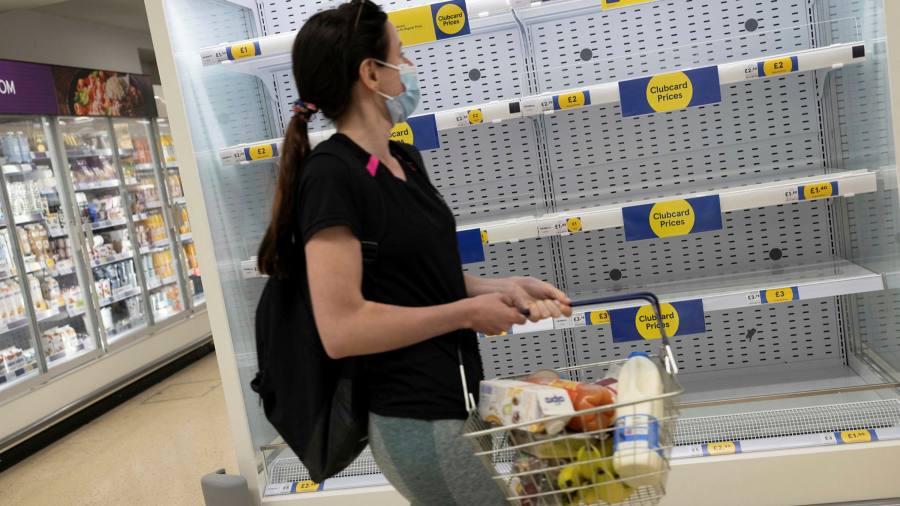 Sign up to myFT Daily Digest to be the first to know about UK business & economy news.

UK business leaders stepped up calls for the government to help fix worker shortages that have resulted in empty supermarket shelves by warning of increased disruption in the run-up to Christmas.

A shortage of lorry drivers partly unleashed by post-Brexit immigration rules has hit supplies to supermarkets and other retailers, and the problems have been magnified by some food manufacturers and warehouse operators lacking sufficient staff.

Companies ranging from Iceland and Tesco to Suntory, Britvic and Greggs are among the many businesses contending with major disruption.

“There is a clear need for the government to be agile and implement targeted short-term measures that provide immediate relief,” he said.

Danker said that the government should add more sectors to its skilled immigrants list so as to bring in additional overseas workers on a temporary basis until Britons were trained up.

Richard Walker, managing director of Iceland, told the BBC that about 30 to 40 deliveries were now being cancelled every day because of lorry driver shortages, leading to “shortages on the shelves”.

He raised concerns about Christmas supplies given the need for retailers to start to stock up for the festive period from September.

Referring to disruption last Christmas amid a resurgence of coronavirus, he added: “We’ve already had one Christmas cancelled at the last minute, and I’d hate this one to be problematic as well.”

He urged the government to allow retailers to recruit HGV drivers from overseas as skilled workers.

We’ve already had one Christmas cancelled at the last minute, and I’d hate this one to be problematic as well

John Allan, chair of Tesco, also said there may be “some shortages” at Christmas, but urged people not to panic buy. “It’s very easy to make a drama out of a modest crisis,” he told the BBC.

Andrew Hadley, supply chain director for Suntory, which owns Lucozade along with other brands such as Ribena, said: “The deliveries of our soft drinks are being affected by the ongoing shortage of HGV drivers affecting the entire industry.”

Products from Britvic, which owns brands such as Robinsons and J20 fruit drinks and bottles Pepsi and 7UP, have also been affected.

Greggs, the bakery chain, said that it had been hit by shortages of various products but that the menu items affected changed on a daily basis.

Ministers have so far ruled out providing temporary visas for EU lorry drivers, and government officials highlighted how some companies are responding to worker shortages by offering higher wages to woo Britons into unfilled jobs.

“The labour market is responding to the shortage with higher wages and incentives,” said one official.

Carphone Warehouse is giving a sign-on bonus of £1,500 to new lorry drivers and paying a £1,500 retention bonus to existing ones. Amazon is offering a £1,000 sign-on bonus to staff at some warehouses.

But Danker said the government should not assume that the labour problems would “self-correct”, or that companies could address the worker shortages simply by offering extra money that risked making them less competitive against rivals.

In recent days, logistics trade groups have lobbied ministers at the Department for Transport for temporary visas for EU lorry drivers, but have been told that the Home Office will not agree to the move.

Richard Burnett, chief executive of the Road Haulage Association, whose members operate more than 250,000 lorries, or half the UK fleet, called on the government to “broaden its horizons” when it comes to recruiting drivers from overseas. Companies are training more Britons as drivers but have warned that this will take time to remedy worker shortages.

Some that are offering higher wages have warned that the increased costs could be passed on to consumers in raised prices.

One company in the food supply chain that recruits HGV drivers said it had increased wages and introduced bonuses but was suffering from a poor quality of candidates.

“You’re putting them in charge of a 40-tonne vehicle. They need to be totally sober, totally reliable and drive really well,” said an executive at the company. “The drivers that left [to go back to the EU] were very good.”

Kieran Smith, chief executive of Driver Require, a recruitment agency, said official figures showed that the driver shortages were not just the result of EU workers departing the UK after Brexit.

He added that 50,000 UK-based drivers had left the profession since the Covid-19 pandemic began, with a disproportionate number of those being aged over 45.

A government spokesperson said: “We recently announced a package of measures to help tackle the HGV driver shortage, including plans to streamline the process for new drivers to gain their HGV licence and to increase the number of tests able to be conducted.”