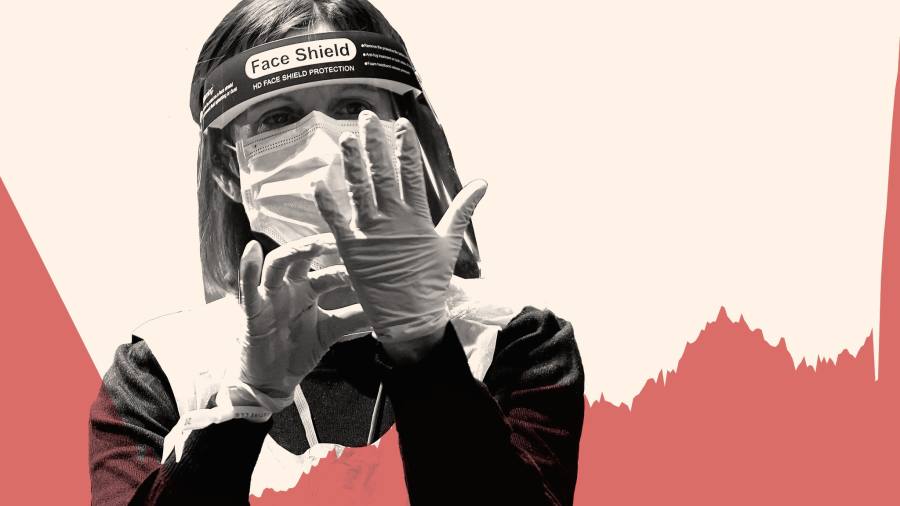 Covid admissions have already surpassed the peak of last winter’s wave in hospitals in Greater Manchester, north-west England, with health chiefs warning patient care is under threat as they struggle to cope with “severe” staff shortages.

There were 1,229 Covid-positive patients being treated across 10 hospital trusts in the Manchester area on January 4, the highest figure since the pandemic began, according to an FT analysis of the weekly regional NHS England data published on Friday. The figure exceeds the previous peak of just above 1,000 set last January.

Meanwhile, separate data showed that one in seven staff at acute trusts in the area were absent on January 2, with more than 3,000 staff either off sick or self-isolating due to Covid.

Two chief executives of NHS hospital trusts in the north-west told the FT that the region was bearing the brunt of Omicron wave in England. One hospital boss described the pressure on the health system from workforce shortages as “severe”, adding that staff were “as harried as last January” and warning that patient care would “suffer” as a result.

“We’re the epicentre at the moment [and] there’s no sense of the problems easing,” said another chief executive. “It’s hard to maintain morale but we know this will pass.” They said that “every member of staff is potentially going to be redeployed” at some point to plug holes due to absences.

They added that it was “possible” the region’s hospitals could require military support in the weeks ahead, following the lead of London hospitals which this week drafted in 40 army medics and 160 other personnel to help ease staff shortages.

Across England, the latest data showed that as of January 7, the number of Covid patients in hospital had doubled over the last 11 days to 16,163, just under half of last winter’s peak.

The number of hospital staff in England off work because of Covid sickness or self-isolation tripled in a month to 39,142 on January 2, pushing overall absence levels to one in every 12 employees in acute hospital trusts.

Data from the Office for National Statistics, published on Friday, estimated that 3.7m in the UK had Covid-19 in the week ending December 31, up 64 per cent on a week earlier. Infection rates were highest in England, with around one in 15 people infected with the virus.

The rising infections have sparked concern that while the health service in London, which was first hit by the new variant, appeared to have coped, the crisis in the Manchester area could be repeated in other regional NHS trusts across England. Critical incidents were declared at 24 of England’s 137 hospital trusts in the past week, with two-thirds still under emergency measures, signalling that staff shortages could threaten priority services. Earlier this week, 17 hospitals across Greater Manchester paused non-urgent surgery.

Meanwhile, Northamptonshire announced a system-wide major incident on Friday because of fears over staff shortages across NHS, social care and emergency services.

In London, Covid admissions fell by 9 cent week-on-week in the seven days to January 5. The equivalent figure a week earlier was a 50 per cent rise.

Chris Hopson, chief executive of NHS Providers, which represents healthcare leaders, said some trusts outside of London were already “under greater pressure” from Covid admissions than the capital despite not yet nearing the peak.

“If we have reached something like the peak in London, it’s topped out at around 50 per cent of the previous load in last January,” Hopson said. “But we’ve now got places that are already starting their Omicron wave with a higher caseload and two or three weeks of growth left. That could present a major problem.” The latest statistics show that England’s hospitals are operating under greater overall pressure this winter than last as they try to juggle the dual challenges of Omicron and reducing the backlog of non-Covid patients needing treatment for other conditions that built up due to widespread cancellations during previous coronavirus waves.

Over the fortnight to January 4, there were an average of 80,335 adult beds occupied across England, up 8 per cent a year earlier, while unoccupied beds fell 15 per cent to 8,289.

“This for us isn’t about the NHS being overwhelmed because we haven’t yet cancelled every single outpatients appointment like we did in the first wave,” he said.

“I don’t think what anybody’s got a handle on is the continued damage [the Omicron wave] will do to the health of those patients who are waiting for elective care,” Harrison added.

A critical care consultant at London’s Barts Health NHS Trust, the country’s largest hospital trust, told the FT that by not imposing more restrictions in England ministers had taken a risk but that in the capital “at least, the government’s gamble [had] worked.” He added: “I feel like we’re at the peak in terms of hospital admissions.”

Sarah Crofts, head of analytical outputs for the ONS infection survey, said there were “early signs” across England of plateauing infections rates in some age groups, including secondary school children. London is the only part of the UK where infection levels dropped in the last week.