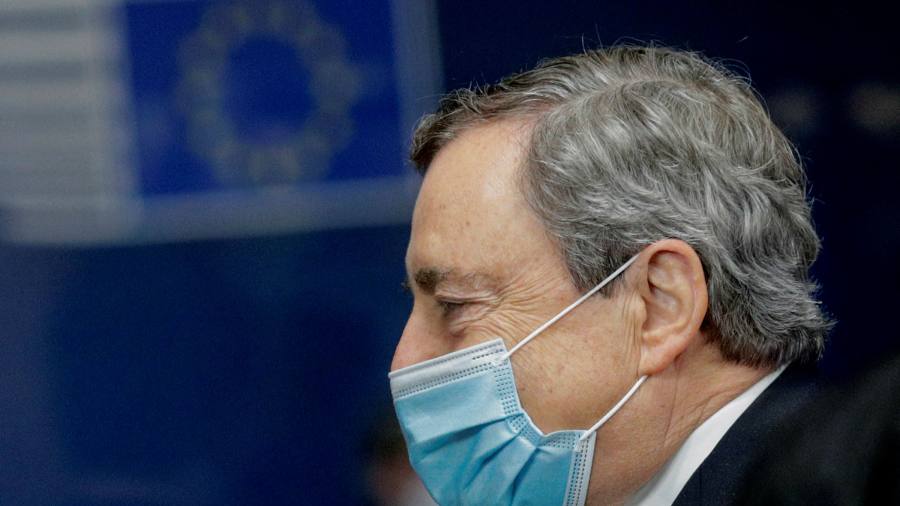 Italy’s political crisis has been averted for now, as the incumbent president agreed over the weekend to stay on for another term, keeping Mario Draghi in place as prime minister. We’ll explore what this means for the European debate on fiscal rules and when the clash with more frugal-minded capitals is likely to intensify.

Meanwhile, in Portugal, the ruling Socialists have been projected to win the country’s snap parliamentary election by a chunky margin.

On Brexit, a new EU-UK parliamentary assembly has elected its leaderships on both sides last week. We’ll unpack what to expect from this body, at a time when trade talks are making little headway and the “partygate” scandal rumbles on in London.

And in merger news, a report shows that despite increased activity last year, the European Commission has launched fewer inquiries — and has taken longer than usual to complete open ones.

This article is an on-site version of our Europe Express newsletter. Sign up here to get the newsletter sent straight to your inbox every weekday morning

Draghi to the rescue, again

The chaotic recent days in Italian politics have been wounding for Mario Draghi, who signalled an appetite to become the country’s president only to turn around on Saturday and ask Sergio Mattarella to stay in the post, writes Sam Fleming in Brussels.

They have been even worse for the country’s political parties, which have been riven by squabbling and infighting during six days of voting. The country’s politicians proved themselves incapable of unifying behind anything other than the status quo — fearful as they were about the prospect of early elections.

Financial markets will nevertheless welcome the prospect of Draghi remaining Italy’s prime minister — inauspicious though the dysfunctional political backdrop appears in the longer term. The parties look enfeebled and internal battles are worsening. But this may leave them less willing and capable of throwing up serious opposition to Draghi’s domestic programme.

One of the few things they have in common will be a desire to keep the current government alive and avoid elections before the deadline in the first half of 2023. This could accentuate Italy’s chances of staying on track with its deficit-reduction pledges, and its reform commitments under Rome’s €191bn recovery and resilience plan.

The outcome is being welcomed in particular by France, which has been working closely with Rome on proposals to overhaul the EU’s fiscal governance.

Draghi and French president Emmanuel Macron will find it difficult to win the fiscally conservative north over to all their reform ideas — even after the ejection of the Christian Democrats from power in Berlin and the arrival of a more reform-friendly coalition in the Netherlands.

But the proposals — among them the idea of granting favourable treatment to investments in green and digital projects — will carry more weight elsewhere if they enjoy the active support of Draghi, a former president of the European Central Bank.

That particularly applies in Berlin. As Erik Nielsen, chief economist at UniCredit said, “You cannot persuade the German government to do anything if they get bad vibes from Italy. So it is very good from that point of view.”

Among the key moments to watch in the next two months are an informal meeting of finance ministers in Paris in late February, and a planned informal summit on growth and investment in early March.

While much of the EU’s fiscal discussion thus far has focused on reforms to the Stability and Growth Pact to make it more investment-friendly, the debate will not stop there. A paper from the Jacques Delors Centre is set to argue that the EU’s Semester process, under which the commission makes yearly reform proposals to capitals on areas such as the labour markets and fiscal policy needs a significant rethink.

The new €800bn NextGenerationEU programme requires member states to adopt a subset of those Semester reform recommendations into their recovery programme. This gives those particular recommendations real teeth, given the reforms will need to be delivered to unlock payments of money by the commission. The paper by Nils Redeker and Thu Nguyen says Brussels should trim back Semester recommendations that are not linked to recovery fund payments, to avoid making proposals that are “bound to be ignored”. (More here)

So what hopes are there for the new UK-EU Parliamentary Partnership Assembly? Nathalie Loiseau, a French MEP who will serve on the body, tells Europe Express she’s an optimist.

The forum for the European parliament and the UK parliament is meant to exchange views on the relationship and scrutinise the functioning of the Trade and Cooperation Agreement. As part of its role it can request information from the Partnership Council, the joint UK-EU body overseeing the relationship.

Last week the UK parliament elected its 35-strong delegation. Sir Oliver Heald, the chair, is a longstanding moderate Conservative MP who voted against Brexit. As did Hilary Benn, the senior Labour MP who is his deputy.

There are other prominent Remainers, such as former MEPs Timothy Kirkhope and Emma Nicholson. But Brexiters were elected too, including Andrea Leadsom, the Conservative former minister, and Sir Jeffrey Donaldson, leader of the Democratic Unionist party in Northern Ireland.

On the other side of the Channel, the European parliament elected Loiseau, a former Europe minister, as its chair.

Loiseau told EE she believes it can start rebuilding political co-operation across the Channel, in areas such as foreign affairs, student and academic exchanges and financial services.

She particularly wants to recreate something like the Erasmus scheme that allows EU students to spend a year at university in another EU country. “Do we want to build a generation where people do not know each other? It is only the very richest families in the EU who can still afford to send their children to the UK.”

However, she said there would be no new agreements such as allowing the UK to remain in the Horizon science research partnership until the UK had agreed to stick to those it had already signed, including the Northern Ireland Protocol.

Does she believe relations can improve? “I am an optimist,” she said. “That is why I am a politician. Otherwise I would do something else. I would write a novel.”

For decades regulators in Brussels have perfected the art of examining mergers of some of the largest multinationals, but the pandemic and new powers have led to fewer and lengthier probes, writes Javier Espinoza in Brussels.

Even as 2021 saw one of the highest numbers of transactions in decades, what is striking is that the European Commission only led 14 “significant” merger investigations, the fewest seen over the past decade, according to a new report by law firm Dechert set to be published today.

The average duration of an in-depth probe soared 29 per cent, reaching a new 19.2-month record since the tracker began. Researchers say the increased length is a result of companies talking to officials for longer during an informal period known as pre-filing to iron out any potential difficulties during the formal process.

Separately, the average formal review period of a lengthy probe reached 9.5 months for the first time, which highlights how regulators are also willing to use their powers to pause the process more frequently. The pandemic also likely played a role in the extended duration of the review period, the report said.

In the US, more than 37 per cent of significant investigations led to a complaint or an abandoned deal, the highest recorded by this tracker. This points to increased scepticism among regulators about concessions offered by companies seeking to appease competition concerns.

Justice and home affairs ministers meet for an informal council in Lille, France, on Thursday and Friday

How many people in Berlin are actually aware of the massive damage our confused Ukraine policy is doing, not only to Germany but the whole of the EU?

Helmets, no guns: Germany’s complex legacy of the second world war is weighing on its efforts to craft a coherent policy on Russia. A new government in office for only seven weeks is being pulled in one direction by its powerful pacifist lobby and in the other by Washington.

Equity warning: Nicolai Tangen, CEO of the world’s largest sovereign wealth fund, told the FT that equity and bond markets are heading for a period of lower returns as the surge in inflation rates becomes a permanent feature of the global economy.

British troops: Boris Johnson is considering offering Nato a deployment of another 900 troops to Estonia — doubling the size of the British force in the Baltic state — as tension continues to rise in the region.

Slovenian loans: Legislators in Slovenia vote on a measure today to make banks repay hundreds of millions of euros to foreign currency borrowers, with lenders warning that the measure would undermine their operations there.

Britain after Brexit — Keep up to date with the latest developments as the UK economy adjusts to life outside the EU. Sign up here

Are you enjoying Europe Express? Sign up here to have it delivered straight to your inbox every workday at 7am CET. Do tell us what you think, we love to hear from you: europe.express@ft.com.