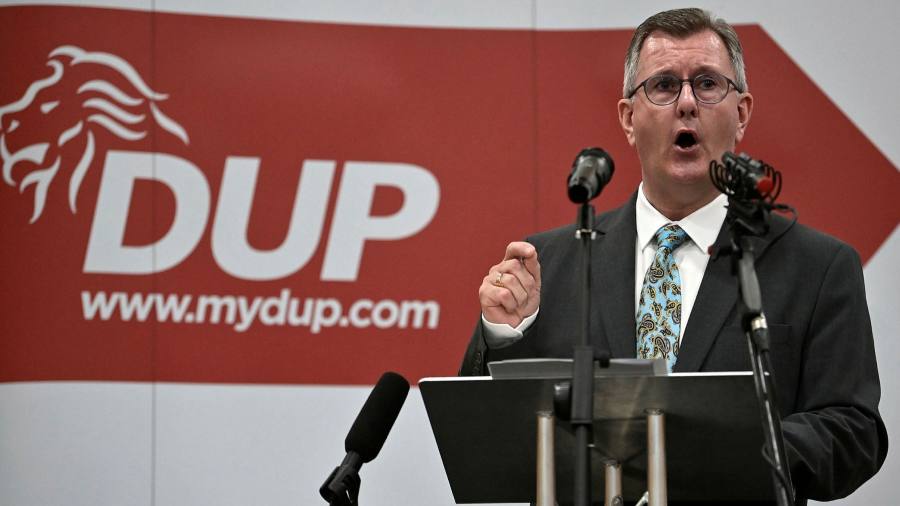 Sign up to myFT Daily Digest to be the first to know about Northern Ireland news.

The leader of Northern Ireland’s Democratic Unionist party threatened to pull out of the region’s power-sharing executive “within weeks” unless the Brexit deal for the province is scrapped.

The move by Sir Jeffrey Donaldson came as Maros Sefcovic, the EU’s top official overseeing the Brexit deal, began a two-day trip to the region. Earlier this week the UK extended the so-called grace period for the implementation of the contentious Northern Ireland protocol to allow negotiations with Brussels over its future to continue.

If the DUP carried through the threat it raises the prospects of elections this year with the region’s largest unionist party, which wants to remain part of the UK, performing badly in the opinion polls. In contrast, the polls put Irish nationalist Sinn Féin in the lead.

The devolved power-sharing executive at Stormont is a key element of the 1998 Good Friday Agreement, which drew a line under decades of sectarian violence in Northern Ireland.

“I don’t want Stormont to collapse, but . . . I’m prepared to go to the country to seek a fresh mandate,” Donaldson told reporters at the end of a speech outlining a refusal to continue what he termed business as usual.

Donaldson also announced he would pull his party out of north-south liaison bodies with Dublin set up under the 1998 peace deal as he warned that violence — which briefly flared up earlier this year — could erupt again.

The protocol was devised during the Brexit negotiations to protect the Good Friday Agreement. The protocol averts the need for a hard land border on the island of Ireland but keeps Northern Ireland in the EU’s single market for goods by creating a customs border in the Irish Sea.

Unionists oppose it as they argue it undermines the region’s future as part of UK by requiring checks on goods moving between Great Britain and the region.

“We cannot continue as if all is rosy in the garden,” said Donaldson, who was named DUP leader in June. He gave no timeframe but said UK prime minister Boris Johnson had to choose “between the political institutions and the protocol. The [UK] government can’t have both.”

Sefcovic on Thursday reiterated that the EU remained “committed” to the protocol, adding: “It is not fair to look at the protocol as the problem. The problem is Brexit”. He said the protocol was “the only viable solution”.

Doug Beattie, leader of the rival Ulster Unionist party, told BBC Radio Ulster that Donaldson was pushing things into dangerous territory. “I think if Stormont goes this time, it will not be back again . . . We will end up with a protocol in whatever form they [Westminster] decide,” he said.

Donaldson’s remarks raised the spectre of legislative elections nine months ahead of schedule as a new opinion poll this month showed the DUP had slipped to fourth place, behind Sinn Féin party, the UUP and the Traditional Unionist Voice, the other unionist party.

“Instead of having elections next May, if we can’t resolve these issues it’s time to give people their say,” Donaldson told BBC Radio Ulster after his speech. “We’re not the problem. The problem is the protocol . . . I’m giving the [UK] government a little more time to find a solution. I’m trying to be reasonable . . . It means, simply, removing the Irish Sea border.”

Donaldson said he was meeting Sefcovic later on Thursday. He dismissed suggestions that his speech was political theatre aimed at upping the ante because of the EU official’s visit.

The devolved Northern Irish executive has only been up and running again since January, after a three-year pause triggered when Sinn Féin, the region’s most popular party according to polls, walked out over a public spending scandal involving a botched green energy project.

Splits within the DUP over its approach to the protocol plunged the party into its most tumultuous period in its 50-year history. Arlene Foster had to stand down as Northern Ireland’s first minister after she was removed as DUP leader in April. Her successor Edwin Poots was ousted after just 21 days in the job.