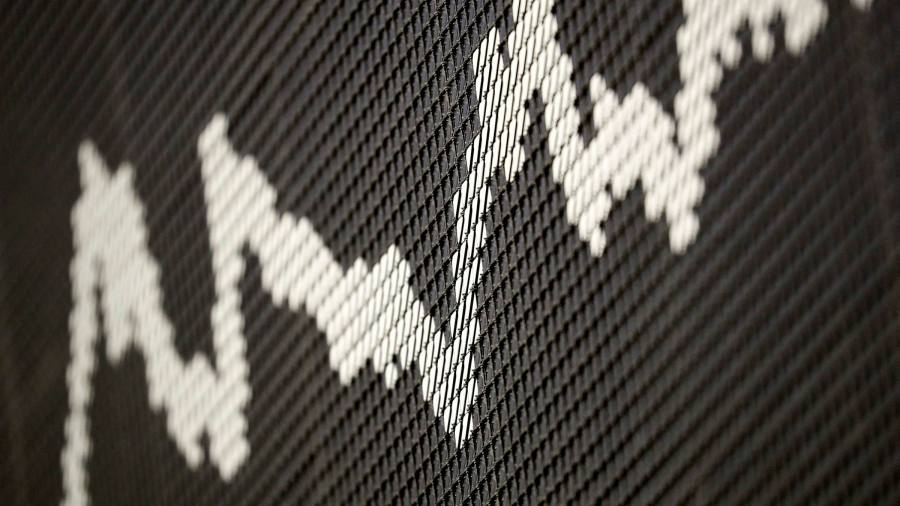 Sign up to myFT Daily Digest to be the first to know about European equities news.

European stocks have had their longest winning streak for eight years, as corporate earnings bounced back sharply from last year’s pandemic-induced recession and central banks continued pouring monetary stimulus into economies around the world.

The Stoxx 600 European equity index has risen 2 per cent in August, leading to its seventh consecutive months of gains and its longest period of monthly increases since the end of the financial crisis in 2012-2013.

Companies on the Stoxx have reported aggregate second-quarter net income growth of 249 per cent from the same time last year, when coronavirus shutdowns drove the euro area’s economy into its sharpest contraction on record.

The percentage of European companies that beat analysts’ earnings estimates hit a five-year high in the second quarter, according to data provider FactSet.

European equities have also been boosted by the European Central Bank pledging to keep benchmark rates at historically low levels until inflation persists “durably” above its 2 per cent target. Like the Federal Reserve in the US, the ECB has also purchased large quantities of government bonds during the pandemic, which lowers the yields on the debt securities and makes riskier assets, such as equities, more attractive.

Earnings growth in the US, where coronavirus shutdowns and travel curbs were less stringent than in Europe, has been slower during the second quarter so far.

Companies listed on Wall Street’s blue-chip S&P 500 index have reported a 93 per cent rise in earnings per share for the second quarter compared with the same period last year, according to FactSet. The S&P, however, was also set to close August with its seventh consecutive month of gains.

“Europe has underperformed the US for years, but there is a lot going for it,” said Julia Scheufler, European equities analyst at Janus Henderson, pointing to the acceleration in recent months of coronavirus vaccination programmes in the eurozone.

A recovery in travel and consumer spending in the eurozone was also likely in the months ahead, Scheufler added. “People haven’t really travelled yet, and consumer savings are at high levels. There’s a lot more to come for us.” 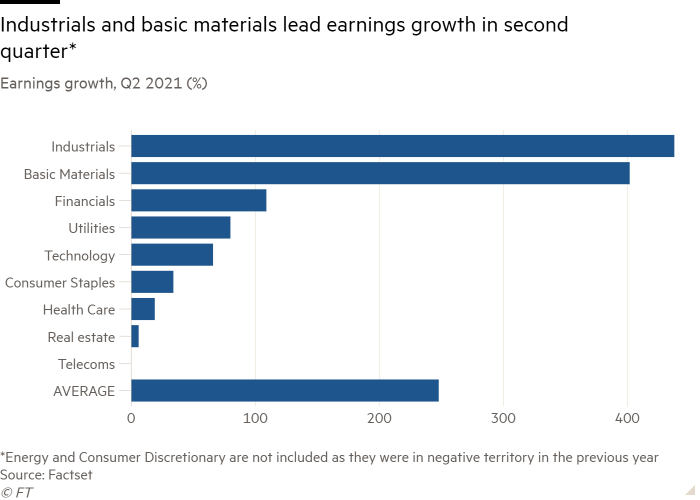 But other analysts believe that eurozone economic growth, along with companies’ earnings prospects and the performance of the Stoxx, is now set to decelerate following easier gains from the depth of last year’s recession.

IHS Markit’s purchasing managers’ index for the eurozone, which collates executives’ responses to questions such as new orders and hiring plans, moderated slightly in August from a 15-year high the previous month.

The PMI survey suggested “growth momentum is starting to roll over in the euro area”, Bank of America strategists led by Sebastian Raedler commented in a research note. The BofA team expects the eurozone economy to expand 8.3 per cent in the third quarter of 2021, compared with the same period in 2020, before year-on-year growth moderates to 4.4 per cent in the fourth quarter. The Stoxx index, according to BofA, is likely to end the year at 420 points, about 12 per cent below its current level. 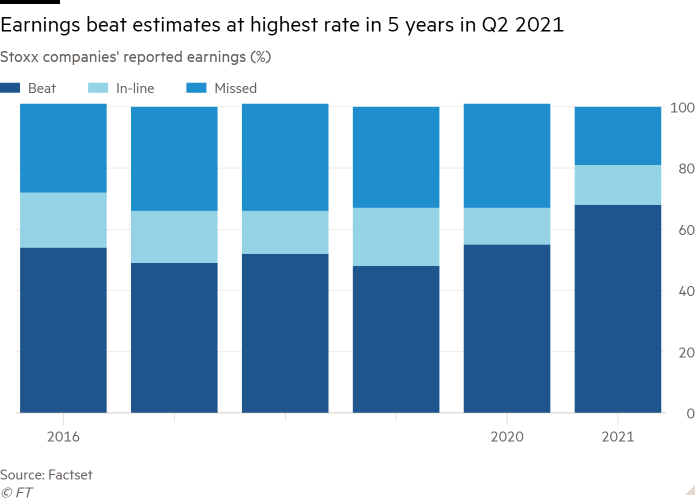