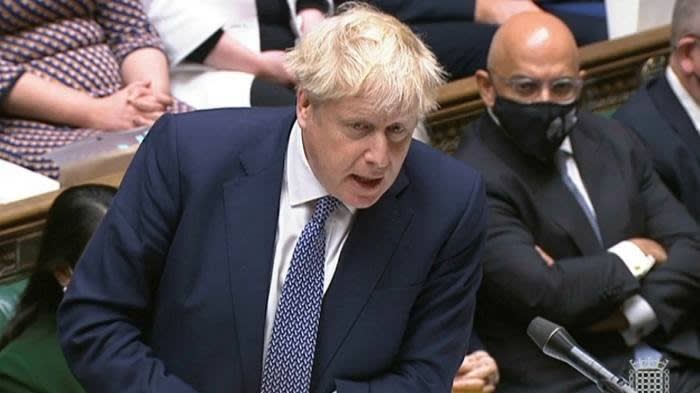 Boris Johnson yesterday faced calls to resign from leaders of the Scottish Conservative party and some English Tories after the prime minister attended a Number 10 “bring your own booze” event during lockdown.

Johnson tried to buy time with a partial apology, saying that he thought the evening gathering in May 2020 was a “work event”, but he failed to stem the tide of anger among MPs from his own party.

Sir Keir Starmer, Labour leader, said the public thought Johnson had been “lying through his teeth”. More than half of the Tories in the Scottish parliament supported a call by their leader Douglas Ross for Johnson to quit.

Many Tory MPs said they would suspend judgment until the publication of a report by Sue Gray, a senior Whitehall official, into the party culture in Number 10 during Covid-19 restrictions. That report is unlikely to be published until next week.

Do you think Johnson should resign? Tell us in our latest poll. Thanks for reading FirstFT Europe/Africa. Here’s the rest of today’s news — Jennifer

2. Epstein accuser permitted to pursue suit against Prince Andrew A civil lawsuit accusing the Duke of York of sexually abusing one of Jeffrey Epstein’s accusers will be allowed to proceed, a New York judge has ruled, threatening further legal consequences for the British royal.

3. US inflation soars to 7% for first time since 1982 Consumer price growth rose at the fastest pace in almost four decades in December, stoking the Federal Reserve’s fears about the threat of elevated inflation and its consequences for the economic recovery. 4. Novak Djokovic admits Covid breach The Serbian tennis player admitted that he attended a photo shoot after testing positive for Covid-19 and said discrepancies on his Australian entry documents were the result of “human error” as Canberra considers deporting him.

5. Short sellers tuck into Beyond Meat Short positions in the plant-based meat producer’s shares have increased 40 per cent since late October, making it one of the most shorted companies in US markets as investors fret over weaker sales and scepticism grows over the meat-free boom.

UK businesses have reported double their usual staff absences as the Omicron variant spreads. In the US, businesses are temporarily closing or adjusting working hours as infections reach an all-time high.

A Chinese court has sentenced three port workers to up to 57 months in prison for breaching Covid containment rules.

A new artificial intelligence-based early warning system can predict the highest-risk coronavirus variants from their genetic code, according to a study. Retail earnings It’s a big day for earnings. Tesco is expected to have had the best Christmas of Britain’s supermarkets. Investors will be looking for confirmation of a rebound from Marks and Spencer. Asos is on the hunt for a new chief executive. Also out are updates from Persimmon, Halfords, Dunelm and Delta Air Lines.

Russia-Ukraine conflict Talks between Moscow and western powers will move to Vienna on Thursday for discussions with the 57-member Organization for Security and Co-operation in Europe, which includes Russia, Ukraine and the US.

Twitter returns to Nigeria The country will lift a seven-month ban after the social media company agreed to open a local office among other conditions.

US producer price index US data will be released a day after consumer prices soared. Italy has industrial production figures out. Rocco Commisso: ‘I’m investing in my country’ © The Red Dress

Reclaiming shareholder power In the UK, almost everyone (in work at least) now owns shares in listed companies, writes Merryn Somerset Webb. One way or another, we are technically part owners of the corporate world. So why don’t we have more control over their behaviour?

How to recruit a better police force At a time when police violence has created bitter political battles, selecting candidates with authoritarian inclinations can have huge consequences. Gillian Tett argues that we need to shift the debate from issues such as gun control to personality.

Mayonnaise rebuke haunts Unilever This week, top-10 shareholder Terry Smith blasted Unilever’s eco-friendly branding of the Hellmann’s product as “ludicrous”, in a sign of shareholder discontent with the pursuit of principles over profit. With sales growth lagging, investor anger could grow.

This week, we asked you what you thought of Boris Johnson’s decision to attend a lockdown-breaking “bring your own booze” event in May 2020. Here’s what you told us:

“[Boris Johnson] believes that he is not governed by the laws he imposed on the rest of the country. How can anyone believe a single word he utters?” — Thomas Wyner, Oxfordshire

“People were prohibited from coming together as groups . . . and whether a party occurred was irrelevant to all this. The big story is why so many people needed to be in offices for the government to function and why work from home wasn’t an option” — Kevin Ryan, Leicestershire